You Asked For It: Theta Pond Haiku

Share All sharing options for: You Asked For It: Theta Pond Haiku 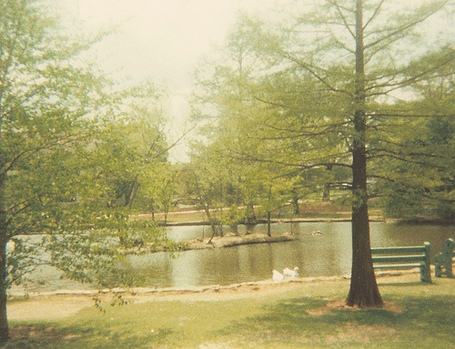 The Summer months bring a relaxing, peaceful, pastoral feeling over the campus of Oklahoma State.  And the most tranquil, halcyon spot in all of Stillwater is the still waters of our own Theta Pond.  This pond has been an OSU institution since 1922, and is a nice place to sit back, relax, and feed the birds.  Or to go there and study, to take a date for some mild to heavy petting, or as the Stillwater homeless have shown, to drink cans of Sterno by.  Back in my "Belligerence of Pride" post, Yachoff mentioned that Haiku's of Theta Pond were scheduled for mid-August.  Well, here are the Haiku's we've promised you and that the kids these days are just CLAMORING for, weeks ahead of schedule (we don't mess around at CRFF).

O-U Has A Pond,
Not As Nice As The-ta Is.
Where Goons Wash Them-selves.

Co-Eds At The-ta.
Just Ask-ing To Get Thrown In.
Get That T-Shirt Wet.

There you have it.  Now finally we can get some peace and quiet around the offices of CRFF.  No more endless phone calls and e-mails asking: "When will we get some damn oriental poetry on this Oklahoma State athletics site?"  Yachoff hopes the masses are finally sated by this small offering of Haiku.

CRFF now offers you this opportunity to add to this Haiku pile in the comments.  It's easy: Five syllables in the first line, Seven in the second, Five in the third.