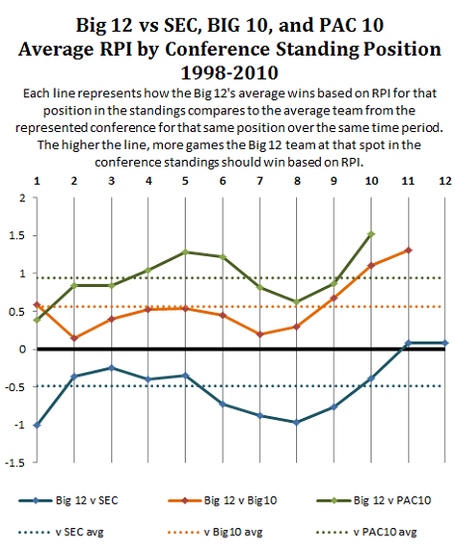 Is that a confusing title and chart?  I promise this is much simpler than it sounds, it is just difficult to explain in 20 or less words for a catchy title.  All I am trying to do here is asses how the other 3 power football conferences stack up with the Big 12 at each spot in the conference standings.  I would have included the Big East and ACC but their whole swapping of teams in 2005 made the process way more difficult than what I was willing to deal with... also, I don't care about Big East and ACC football. (just kidding Duke football fans)

What spurned this was the revival of all the conference realignment talk thanks to A&M pulling a Nebraska and stirring up the "we feel disrespected" hive into a frenzy of talk about leaving the Big 12.  One of the overriding sentiments among many of the articles from the last two days about this was "why would A&M want to go to the SEC to get drilled by the best football conference out there?", which was reminiscent of the talk about Nebraska no longer getting off light and now having to play in a "real football conference", and I wanted to put at least some general comparison numbers together to help evaluate if these other conferences really are/were that much better at playing FOOTBAW than the Big 12.  Because there is nothing that bothers me more than just general opinion that one thing is better than another thing without anything to back it up, especially when our thing (the Big 12) is in a part of the country that doesn't exactly get the most media help for its image.

What I did was pull all the win/loss records and schedules for the 1998-2010 seasons, and run them through the very standard RPI formula which is:

So what I did was ignore the team names and just pulled the average RPI for the #1 team in each conference over the 13 year period, then compared them all to the Big 12 #1 team, then did the same for the #2 team, then #3, then... well you know how counting up works.  Then I calculated what the RPI number means in terms of games won so we were actually working with number that means something here. Given that SOS remains the same, every game a team wins improves their RPI by 0.02.  So I basically counted a 0.02 bump in RPI as an extra win. What this does is flatten SOS across the conferences and makes it as though everyone played the same level of schedule difficulty as opposed to just working with total win numbers which would be invalidated by the variable strength of competition.

Without further unnecessary buildup, here is the actual explanation of the chart.

The dotted lines indicate how many more games the Big 12 won per team per season (with SOS and RPI involved), than the conference represented by the dotted line.  Or in the case of the SEC, how many fewer games the Big 12 won.
Secondly, the vertical lines represent the order of finish in the conference, and the corresponding dot on the line represents how the team in the same standing position as the team from the Big 12 rated in terms of adjusted wins based on RPI. Basically, the closer to the top or bottom of the graph the dot is, the higher the gap in RPI the Big 12 team is from the team in the same spot of the standings from the other conference.  The closer to the top the dot is, the Big 12 team is that much better, the closer to the bottom, the other conference's team is that much better.

There are plenty of nice observations to make from this, but there is one that sticks out very plainly to me.  I believe this chart basically nullifies the myth that the Big 12 is Texas, OU, then 10 (now 8) other teams.  If that were true, you would see lines that would be at their highest point for positions 1 and 2, then steadily decline after that.  What we see instead is that the PAC 10 and SEC actually compare most favorably to the Big 12 at the #1 spot, then there is a sharp uptick to the #2 through #5 spots. This tells me that over the past 13 years, those are the 2 conferences that are the most top heavy at that #1 position relative to the Big 12, instead of the other way around as is the perception.

Next you notice that the Big 12 compares very favorably to all conferences at positions #2 - #5 (the domination over the PAC 10 at the 4-6 is especially impressive), then starts to decline at #6 though #8, then boasts a very strong bottom tier as the line rockets upward for positions #9 - #12.

And for reference, here is a table that shows the number of times over the 13 year span that each Big 12 team finished in each position according to RPI. So you can kinda tell from this who is driving the RPI at each position.

Really, for as much shit as we like to give Baylor, Kansas, and ISU, the Big 12 is at it's strongest at the #11 and #12 spots. So in relation to other conferences, the bottom tier of the Big 12 is dominant.  Good work Clones and Bears!