Share All sharing options for: You Down With RULE 9-2-1d? Yeah, You Know Me

At the Big12 Media Days last Monday, before any of the coaches or players took the stage, there was a primer course taught regarding a change in unsportsmanlike taunting penalization.  This year in college football there will be a renewed focus on Law and Order, but not the good Jerry Orbach/Sam Waterson kind.  It'll be that other kind where rules are strictly enforced with harsher penalties, entertaining excessive, taunting touchdown jigs and jives are threatened with extinction, and players are not free to express their joy to their fans in playing well for their team fully, the way God intended.  Or perhaps the penalties will be doled out fairly and consistently, resulting in a more respectful league.  Or maybe it'll just confuse everyone into paralysis.

The rule that has brought the most controversy, thanks in part to Kansas State's saluting loss in last year's Pinstripe Bowl, is RULE 9, Section 2, Article 1, By-law d. in the NCAA rulebook which states as a "Specifically prohibited act":

Any delayed, excessive, prolonged or choreographed act by which a player (or players) attempts to focus attention upon himself (or themselves).

Starting this year, unsportsmanlike acts will no longer be "live ball fouls treated as dead ball fouls". Unsportsmanlike penalties will be "Common Fouls" and treated the same as holding or a block in the back.  A recent press release by the NCAA puts it thusly,

"One way to think about this is that starting in 2011 such a player will have a choice: he can score the touchdown, or he can taunt the opponent, but no longer can he have it both ways."

If the referee feels that a player has violated one of these excessive celebration/taunting by-laws, he could not only nullify the player's touchdown by calling for a 15-yard penalty from the spot of the foul if the act was determined to have occurred before the ball crossed the line, he will send the player's mother a notice of her son's insubordination.  The player will then be made to do extra chores until he can learn to keep his celebration and joy of life to himself.  If you think this is harsh, if a Baylor player is caught dancing in the endzone, it's a nullified TD, chores, then excommunication from the Baptist church.

In the Pinstripe Bowl against Syracuse, K-State player Adrian Hilburn saluted to fans in the crowd after a late touchdown, which gave the officials reason to call a 15-yard penalty on the following two-point conversion that, if it didn't directly cost K-State the game, certainly did not help them.  The salute was viewed by many to be a very benign gesture in comparison to the acrobatic, obviously choreographed in advance, celebrations present in the NFL. Referee Todd Gerlings, who was apart of the officiating crew for the Pinstripe Bowl said this justifying the controversial call:

"It was the salute, which was the judgment of the calling officials, which were the head linesman and the back judge. Two officials threw the flag, both judged it to be drawing attention to themselves, and that’s what the flag was for."

If the "drawing of attention" was determined to have happened before the ball crossed the plane of the endzone, this year Hilburn's touchdown wouldn't have counted at all.  However, this year there is also a change in that acts determined to be "spontaneous celebrations", such as ball-spiking and saluting, will be ok.  So, the salute wouldn't even have drawn a flag this year.

Will this live ball penalty regime change be a good thing, or will college football just become duller with more rules and less boisterous celebration?

"This isn't 'Nam, Smokey. This is Bowling. There are rules."
-Walter Sobchak, "The Big Lebowski"

The rulebook of college football reads like a mix between "The Holy Bible", "The Cat In The Hat", and the instruction manual that came with Yachoff's first car, the HQM Sachsenring GmbH Trabant.  College football is governed by a densely written snooze of a text, filled with redundant inanities that keep players and coaches honest while at the same time creating avenues for convoluted confusion when it comes to interpretation.  If you don't believe Yachoff, here are some excerpts:

"Unfair Tactics
ARTICLE 2. a. No player shall conceal the ball in or beneath his clothing
or equipment or substitute any other article for the ball."

This would be something to see.  Maybe if the Sooners would have pulled this stunt they could have beaten Boise State a few years back.

Did they intend this to rhyme? Is it mere coincidence? Why must the rules committee speak like Shakespeare's mutant twin? Like this gem:

"m. There shall be no chop blocking."

Yachoff believes that if this rule was apart of "The Ten Commandments", there would be no more wars or bloodshed or hatred in the world.  There would be only harmony.

"And you can act real rude and totally remove, and I can act like an imbecile."

Oklahoma State football's undisputed best player ever Barry Sanders never celebrated in the endzone.  Not once in 54 career TD's.  And because of the culmination of all these anti-celebrations, passively tossing the ball back to the ref in the endzone without spectacle, because as Sanders himself said 'he'd been there before, and would be there again", Sanders is not only remembered as the most dynamic RB in the college game, he is remembered as a class act.  Ironically, Sanders' acts of not celebrating will be remembered more than any other OSU player's celebration, no matter how ostentatious or outrageous.  Still, at the same time, not all players can be as humble and disciplined as Sanders.  Some people just gotta dance.

What is the definition of excessive celebrating? As long as the celebration isn't designed to demoralize the other squad, why would you want to rain on the celebratory parade of a young man who is having success on the field of play? Hopefully, the spontaneous clause will alleviate some of these bonehead calls such as the K-State fiasco.

Then the matter of: Where do we draw the line between unsportsmanlike high-stepping toward the endzone and someones larger than normal, non-celebratory running stride?  The length of a man's stride is a pretty subjective matter.  Here elaborates Baylor Bears head coach and noted guesser of male weight, Art Briles:

"I do get a little concerned with the new touchdown celebration rules. I’m not sure how lax they’re going to be. If you’ve ever watched Edwin Moses run hurdles ... he’s not low-stepping when he crosses the finish line. His knees are up and he’s stepping long and he’s stepping pretty. You know I’d hate for a line judge to interpret running like that as taunting."

Endzone celebrations are not always wholly awesome spectacles. And in a lot of instances, taunting just comes across as ridiculous such as instances of taunting an obviously overmatched team, or taunting while losing as this famous OU demotivational poster demonstrates: 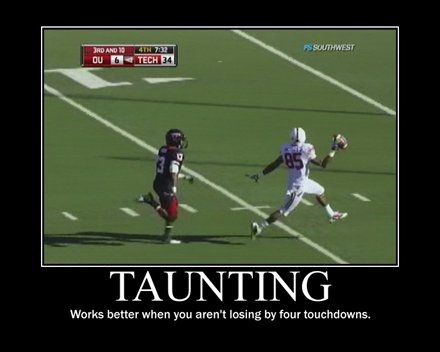 Taunting and excessive celebrations are indeed juvenile, imbecilic behaviors and should be penalized.  Nobody likes a jerk.  However, lumping a celebration after a good play in with taunting is flawed logic.  Referees need to bring consistency and common sense in with these new penalties, or the game of college football may be neutered of the bravado and spectacle that it is most famous for.