The House Divided: Should You Stand For It?

Share All sharing options for: The House Divided: Should You Stand For It?

A commonplace sight on Oklahoma state roadways is a decorative license plate that tells passing motorists that the driver/titleholder of said auto is embroiled in a family drama that would give Dr. Phil night-sweats.  These misguided "House Divided" souls that you, friends, pass on the way to church, Lions Club meetings, or to get new skull tattoos are living lives full of compromise, half-truths, deceit, and secret resentment.  These unfortunate, broken families are known as "Houses Divided" (OSU fans and OU fans co-habiting together!).  And as we all remember from history, houses divided cannot stand. 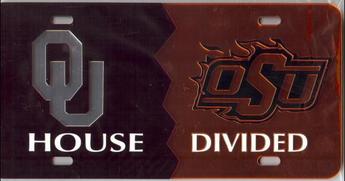 The story behind these license plates and homes divided is simple.  Maybe Mommy went to OSU, graduated, got a good job, but then one night she goes out to some dive bar with some colleagues, gets drunk and meets some mouthbreathing OU fan.  Before she can properly get acquainted and find out what his affiliations are college football-wise, she goes back to whatever shotgun shack this land squatter has managed to cobble together, and then, friends, is when the ugliest and most disturbing kind of "Bedlam" begins.

Before you know it nine months have passed, some kind of half OSU/half OU mongrel is hatched, a front license plate is purchased, and a "House Divided" is established far from the sight of God or anything else that is holy.

The mixing of the two sides creates all sorts of problems for the family, both internally and externally.  Mommy has taken to the drink because all her OSU Tri-Delt sisters, aghast at Mommy’s life decision, have stopped calling and her parents, who raised her in a loving, pro-OSU environment and never would have dreamed of this kind of sorted life for their daughter, have started unabashedly calling the baby "that half-Sooney bastard".  Daddy been pissed since his OU buddies won’t come over anymore because of that Pistol Pete macramé and those Theta Pond watercolors that cover most of the T.V. room.  Daddy starts to fantasize about running away to Norman, where he can be with his own people.  Daddy’s never actually been to Norman, but the thought persists.  This home is doomed from the start.

When "That Half-Sooney Bastard" is old enough to go to school he is confused by his parents and ostracized by the other, more well-adjusted children.  Mommy dresses T.H.-S.B. in an Orange Eskimo Joe’s t-shirt for kindergarten, but when Daddy drops the kid off he puts a smelly, tobacco-stained OU ballcap on T.H.-S.B.’s head and offers some pearls of Sooner wisdom.
"Remember my child, education isn’t that important, so don’t get too hung up on learning anything today.  And if anyone gives you any shit about anything, just point to your hat and say: ‘7 National Titles’."

The other children relentlessly tease "That Half-Sooney Bastard" to the point of severe mental anguish and self-doubt.  Taunts of: "Hey ‘SoonBoy’, pick one why don’t ya!" and "Don’t you know Orange and Crimson make freak?" fill T.H.-S.B.’s ears.  Regrettably, the other children are correct in teasing T.H.-S.B.  T.H.-S.B. is a living contradiction; a half-breed.  In school, he doesn’t know if he wants to be a Veterinarian, an Engineer, a Businessman, or just follow his Gooner father into the cesspool trade.   During games of pickup football T.H.-S.B. can’t decide between the wishbone pass or a game more reliant on the run.  A natural, gifted wrestler, T.H.-S.B. inexplicably quits the wrestling team to go out for gymnastics, which opens him up to all sorts of new ridicule.  Poor T.H.-S.B. has the deck stacked against him.

Back at home, Mommy and Daddy are not faring these dangerous waters any better.  Mommy, daily comatose and by now dignity barren, starts to obsess about the time she caught eyes with former OSU QB Zac Robinson at a crowded party.  Void of any sort of waking reality, Mommy comes to believe she is actually married to ZROB and not the walking, talking fart of a Sooner she so regrettably ended up with.  When ZROB inevitably takes out the restraining order on Mommy, Mommy is crestfallen and inconsolable.

But friends there is hope.  Turns out that Daddy, in an effort to unite his divided, splintered family, makes the sacrifice to come into the light and bring his cursed family out of eternal darkness.  He becomes a Cowboy fan.  T.H.-S.B. gets a scholarship to Oklahoma State and quickly marries an OSU girl to prevent any future children from repeating his tortured upbringing.  Mommy moves out of the psych ward and back with Daddy, reinvigorated by Daddy’s new commitment to the light and the way, Oklahoma State University.

As they are no longer a "House Divided", Mommy and Daddy decide to rid themselves of the horrible totem of their past life.  Mommy, Daddy, and "That Half-Sooney Bastard" (who now goes by "That Full-Cowboy Bastard") join together and drive their decorative license plate deep into the heart of the New Mexico desert where no one knows or really cares about this rivalry(or college football in general).

Friends, lest you fall upon times as wretched as these that befell this family before they found the true way, keep watch over your home.  Do not let the Sooner infiltrate your ranks.  A lifetime of depravity and despair awaits the Cowboy who lets their guard down, even for a second.  A house divided upon itself cannot stand, and any house with a Sooner in it should be condemned and immediately razed.