The Week that Was | CRFF Weekly Roundup

Share All sharing options for: The Week that Was | CRFF Weekly Roundup

Welcome to the CRFF Weekly Roundup. This is a feature that runs every Friday afternoon and serves as your recap of the weeks developments in all matters Oklahoma State, CRFF, and the newest Twilight movie.

CRFF Comment(s) of the Week
A shout out to the best comment(s) of the week.  There are two categories, most rec's (self explanatory), and editor's choice (we pick our favorite). Rec em up folks so we have some clear cut winners. On to this weeks COW:

It was a tie this week.  And I thought both comments were outstanding so instead of breaking the tie I'll go ahead and award both of them COW for most recs. 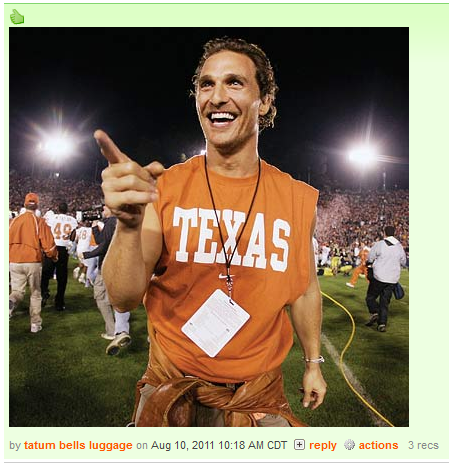 The whole thing with Blackmon's name was great in the podcast and in the comments, but Upgrayedd took it to another level with the Jamaican comment. And tatum bells luggage came through with the pic of a fanbase embarrassment that was unexpected in the mess that was fat OU fans and hairy Mizzou fans.  A CRFF "Great Job" goes to both of you.

From the post: The Ultimate Gameday Guide To Stillwater: Part Two, Gameday
Remarkable comment.  And not just because you give us a ringing endorsement either.  I too love the unquestionable status of the Joes cup.  You could carry anything around Stillwater in a Joes cup and never be questioned. If anyone ever needs to smuggle weapons grade plutonium through Stillwater, use a Joes cup as the container and you won't even have to hide.

A&M rumors of leaving the Big 12 fired up again on Tuesday because of these 2 tweets by Billy Lucci:

Aggies fans all got a collective boner, and the rest of us all made the jerking off symbol and said, "wake us up when the governor of Texas acknowledges the possibility of a move to the SEC".

Wednesday into Thursday, this all happened. Headlinin’: Rick Perry turns simmering A&M-to-SEC rumors to a boil - Dr. Saturday - NCAAF Blog - Yahoo! Sports
Now it is confirmed that the Aggie Board of Regents will be meeting on 8/22 to decide if the Aggies will move to the SEC and effectively end the Big 12. So I guess Aggie fan wasn't overreacting?  Did my head just explode?

Thursday, CJ Curry decommits from Georgia and signs with the Pokes.  Read that again.  Oklahoma State took a 4 star recruit from Georgia. Read that again. Curry was the very first recruit of Georgia's class of 2012.  Read all of that again, slap yourself, and write a thank you note to T Boone and Coach Mike.
There is a great article about Curry's whole decision here: Shocker! Longtime UGA WR recruit CJ Curry switches to Oklahoma State (UPDATED) | AJC College Sports Recruiting