In Defense of "Phantom Pete"

Share All sharing options for: In Defense of "Phantom Pete"

Red hot summer hype surrounds the Oklahoma State Cowboys. Riding a pre-season top ten wave of a much better-than-expected previous football season, ESPN, Sports Illustrated, and press outlets both local and national compete to land a photo op with OSU's charismatic QB and too-good for college ball wide receiver. O-State fans are excited about a rumored change to the uniform. Mike Gundy closes out practices to all but select media.

It was the "August of Ill-advised Oklahoma State Marketing Campaigns".

It was the "Birth of Phantom Pete":

Two years later, we once again find ourselves in August patiently awaiting a major stepping stone in the history of our football program. Again, the Cowboys have the red-hot summer hysteria building with the media thanks to last year's 11-win season. We have a different charismatic gunslinger named Brandon Weeden throwing to a different but still too-good for college WR, Justin Blackmon. Mike Gundy's relationship with the media is still, and because of this always will be, tenuous at best. O-State fans are excited, or at least perturbed but sensory stimulated, by these new uniforms.

"Ph. P." could, would, and should never replace Regular Pistol Pete. OSU supporters all know this. Nike knows this. OSU Athletic Director Mike Holder knows this. In a collectively conscientious effort fans have banded together to hate this strangely obscene, bizzaro icon so that it'll never gain a foothold within the Oklahoma State community strong enough to replace Reg. Pistol Pete the mascot. This effort by fans isn't really working as the shadowy icon adorns the hip of the uniforms this season. The marketing dept. wants you to like it, obviously. As "Ph.P." is mostly unpopular with the Poke community, fans of "Ph. P." are free to wear the "Phantom Pete" apparel without thinking they are contributing to Reg. Pistol Pete's extinction.

2. Fans worry "Ph. P." is an indication that OSU athletics plan to gradually change our primary color from Orange over to Black.

This concern might contain a bit of truth. There has been a definite pro-black uniform shift since 2009, with black helmets making their first appearance since 1983 this coming season. Orange will presumably dominate the field as it should, but may share closer to equal time with black uniforms this year. However, a total Orange to Black color swap could never happen in Stillwater; too many marketing dollars have been spent getting people to wear Orange to games to switch over now.

Nobody liked that ridiculous, fucked-up-beyond-all-recognition song. "Cowboys4Ever" was sung by a Tiny Tim impersonator that graduated from Baylor of all f.u.b.a.r. places. WE ALL HATED THAT SHIT. IF YOU LIKED "COWBOYS4EVER" KEEP IT QUIET AND MAYBE THINK ABOUT GIVING YOURSELF 40 LASHINGS THIS EVENING FOR PENANCE. "Ph. P." is leaked in August, 2009 around the same time as fans get wind of the GREAT MUSIC TRAVESTY that OSU had planned pre-game for UGA. Thousands of "Ph. P." hats are distributed outside the first game against the Georgia Bulldogs in a Nike tent along with "C4E" t-shirts on Sept. 5th, 2009. The "Ph. P." hats have "Cowboys4Ever" scrawled on the back, and the ghostly, bizzaro Phantom Pete icon on the front. Right up front Phantom Pete is doomed, because he is PAIRED WITH THE BLEAK EXCUSE FOR MUSICAL GARBAGE that "C4E" turns out to be. Despite a fine 24-10 victory over the Bulldogs that day, Cowboy fans never get the association or the "Prairie Wind" out from under their skins. This association is unfair as the two, "Ph. P." and "C4E", have little to do with each other besides having been introduced together the same Saturday afternoon.

4. The orange eye and black shadow turn Pistol Pete from a threatening, but fundamentally family friendly mascot, into some sort of troublesome renegade.

"Phantom Pete" is a renegade. He plays by his own rules. "Ph. P." doesn't care if you like him or not. "Ph. P." is like any other badass in the respect that he transcends other peoples opinion of him. "Ph. P." doesn't need your approval, cause if he had your approval he wouldn't give a damn anyway. In fact, Phantom Pete has much in common with another famous renegade; Chris Gaines. Over 9 years ago, country singer Garth Brooks devised a way to branch into the world of contemporary soft rock with an alter ego named Chris Gaines. Gaines could, in the present day and age, be called the first solo Emo act, but you can judge that for yourself. All this was very ahead of it's time and avant garde for a middle aged country singer known for his jovial beer room standards, and for a period even the most diehard of Brooks' fans had trouble accepting that their hero, OSU's own checkered shirted Garth Brooks, had ruined his rep and persona by changing it so..um, dramatically. Then all of a sudden fans realized that the indifference was what made Brooks/Gaines so cool. He didn't care if he failed or not. Brooks wanted to try something new, and he was going to do it, critics and fans be damned. The same principle could apply to any incarnation of Pistol Pete. It's cool if Pistol Pete wants to branch out and get in touch with his inner-badass. As long as he doesn't try to grow bangs.

5. Fans think the orange eye and black shadow are a needless makeover of an already iconic mascot.

This is the "Don't fix what's not broken" argument, and it's a point well taken. Pistol Pete is the best mascot in the country. All fans speak grandly of their mascot, but Pistol Pete earns his high praise being based off a real person; Oklahoma State's mascot isn't just a boring anthropomorphic duck or badger or PONY. Pistol Pete is Frank Eaton, a man who revenged the murder of his father by learning to be the best shooter around then tracking and killing each one of his father's murderers. Pistol Pete is a bad dude already; a symbol of the "old west". Making him look darker, meaner, more pissed off just adds to Pistol Pete's mystique. The black shadow and dark colors of "Ph. P." perhaps can be traced as a continuation of the "L.A. Raiders" ballcap fashion trend of the 1990's. People still like black clothes in 2011. Thus, trends in fashion have influenced the look of the most iconic representation of Oklahoma State. "Phantom Pete" is the natural manifestation of this trend.

So there you have the apologia for "Phantom Pete". OSU fans don't have to like "Ph. P.", but they will be seeing him for the duration of the upcoming season.

Let's just be thankful that Pistol Pete was presumably given live mascot birth and not hatched so we won't have to see any of this bad craziness: 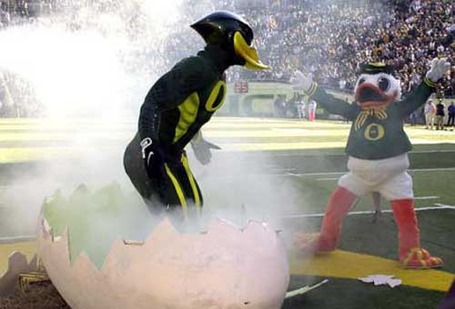