Share All sharing options for: Know Thine Enemy: UL-La, or LA.-LA, or Somethin'...

Name: University of Louisiana at Lafayette

via vmedia.rivals.com
Joe Deforrest, OSU Associate Head Coach/Special Teams Coor, graduated from UL-La in 1987, and played for the Cajuns as a Linebacker and also as a pitcher on the Cajun Baseball team.  There was talk late last year of Deforest fillin' the HC vacancy at his Alma Mater before Mark Hudspeth was hired.

Richard Simmons, noted aerobics guru, studied to do...whatever it is that he does...at UL-La before transferrin' to Florida State.  Due to lack of recognizable alumni, UL-La seems eager to claim Simmons as their own.  Good for them.

The history of the Ragin' Cajun mascot is just as complex as its university title.  The University of Southwestern Louisiana was known as the Bulldogs, before switchin' to the Ragin' Cajuns around 1960.  Mr. Cajun was introduced, followed by this throwback to 80's excess, The Fabulous Cajun Chicken: 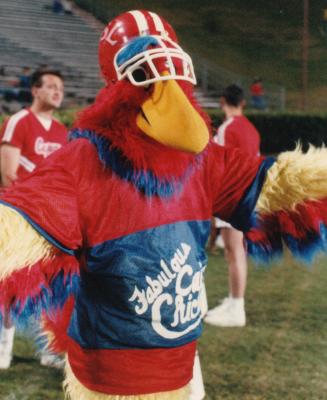 As the Fabulous Cajun Chicken was prone to coke binges and crashin' into telephone poles any and all Trans-Am's provided to him by the UL-La athletic dept., he was scrapped in favor of maybe the most imaginative mascot in college football: Cayenne, the chili pepper: 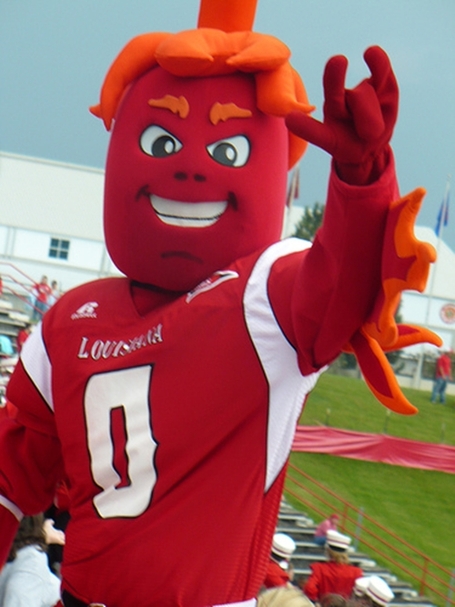 Sorry, but not very intimidating.  Pistol Pete has been known to eat a chili pepper or two in his day, is all Yachoff is sayin'.