Share All sharing options for: Picks From Joes Rides Again

This is almost Missouri-ish in the weakness of the opponent. Texas State finished 4-7 (1-6 in the Southland Conference) and ranked no higher than 55th in any offensive category and no higher than 93rd in any defensive category. Did I mention they plat in the FCS? It appears the old riverboat gambler has taken a page out of Bill Snyders playbook, and found the biggest bitch he could to open. I know two things going into this game; 1 Texas Tech will have at least one win this year, and 2 Texas State will spend the money Tech paid them on cigarettes and hookers. Tech rolls, 54-10.

Normally I spend time making fun of Big 12 teams who schedule FCS opponents, but the UNI Panthers might actually beat the Cyclones. UNI went 7-5 in the Missouri Valley Conference (whom KSU and Baylor should become familiar with, if the Big 12 breaks up) and had a top 10 rushing attack last year. I should take time and hate on ISU, but truthfully I don't think they care if they win or lose, so long as there is Natty Light. I won't call for a loss, but there will be a scare, ISU wins, 28-27.

Kansas football this year sucks, hard. I mean, Sasha Grey (official porn star here at CRFF) is envious of the Jayhawks ability to suck. Fat-gino left the cupboard bare (in every sense of the word. Seriously, how much do you have to eat to maintain 500lbs?) and second year head coach Turner Gill is left to turn it around. Which he won't. This game is basically the only sure shot the Jayhawks have this year, but they could probably find a way to lose this one. I think they go either 1-11 or 2-10 on the year (maybe, just maybe, they beat KSU because it's a rivalry game), so I hope they enjoy tomorrow. In what may be Turner Gill's last win at Kansas, the Jayhawks pull it out 17-10.

Texas has the curious ability to be both respected, and schedule opponents like the Rice Owls. I guess when you fart and a $100 bill falls out you have to cash to pay Rice to keep coming back for more, but it seems that it's time to let this "rivalry" die. Texas has a 50 game lead in the all time series, and has won the last 16 straight, and even though Texas sucks pretty hard, the wont lose this one. But enough about actual football, what you want to hear about is how the longhorn network will destroy college football. It will, and when it does Rice will still take money to have their ass hammered by Texas. I think that having Garret Gilbert in the game will spot the Owls about 20 points, but that won't be enough to get by UT, and Texas wins 21-20 (yeah, I have zero faith in the Rice offense).

(first pitcher down, ordered a second and took a shot of Makers Mark)

What the hell? The Tigers didn't find the biggest pussies to schedule for opening day? I don't believe this. I'm sure further down the line they have somebody scheduled to have a football rammed up their ass. The Redhawks went 10-4 last year, winning the Mid-American Conference and taking a bowl victory over Middle Tennessee, and about 2 seconds after the game ended their head coach bolted for greener pastures. I guess this will teach us a few things, such as does Missouri have a quarterback, how will there defensive line hold up, and will the be the next to drop out of the Big 12 (it may not actually teach us that, but we all know Mizzou is the type of slut to leave for a bigger check). In what may actually turn out to be a good game, Mizzou wins 30-23.

Why did I rank this game so highly? Because I fucking forgot they were playing that's why. Will this be a good game? Shit no, but Kansas State should win. The big story is not the game itself, but the fact that 12 children under the age of 12 were sacrificed to keep Bill Snyder alive. They succeeded, but unfortunately during the resurrection ceremony something went wrong, and from Hell this was spawned. 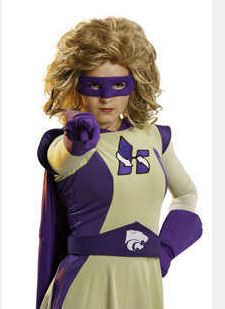 Look at that shit, LOOK AT IT! Why, God why, did anyone ever think this is a good idea? Everyone remember, before every beer you drink, pray that someone is able to slay this demon. (Really, we need like Bruce Lee, Blade, maybe the entire Ghostbusters, and Zeus to try and take this down). Either way, KSU wins 35-24

3: University of Louisiana at Oklahoma State

Did I spell Louisiana right? I don't have a clue. Fucking spell check wouldn't tell me what the right spelling is. Anyway, is this a homer pick to have this game so highly ranked? No, because we owe them a fucking merciless beating after last year. For almost 3 quarters they thought they could beat us, and for that they need a lesson. Thinking about what we're going to do to them tomorrow has given me wood. Either that, or the amount of tail walking around this joint has me distracted. Pokes win, 72-10 (every time I make a prediction the margin of victory gets even bigger)

Whoever made TU's schedule needs his balls chopped off. What a dumbass. This year Tulsa has as non conference opponents OU at Norman, Oklahoma State in Tulsa, and Boise State at Boise (I don't know if Boise is even a town, and I don't care to check). I went over to SBN's OU site and checked out their predictions for this game, and I gotta say they are smoking crack. The biggest score any of them had was like 54-14. Bob Stoops is known for running up the score on anybody he can, and the game is in Norman. That double chinned asshole from Ohio or where ever the hell he's from won't call off the dogs til it's at least 64-0 (yeah, like Cincy so eloquently stated earlier this summer, Bob Stoops is a cocksucker), and this game will be no different. Sooners roll, 70-17 (and Tulsa won't score the first point til the 4th quarter)

(second pitcher down, ordered something called a "Skylab Fallout". I hope I can get through this)

1: Baylor and TCU in Dallas

Are you shitting me? Baylor in a big time game to start the season? We'll, TCU better watch the hell out, Robert Griffin the 3rd will thrown 900 screen passes for 113 yards and win two Heismans this year. RG3 is the most over-rated player of the past 30 years. The fucking Boz had better pro potential than Griffin does. It's absolute bullshit he is any sort of a preseason All Big 12 QB. All that shit ends tonight though, as TCU is going to skullfuck Baylor. I don't know how the national pundits keep thinking Baylor will be good, they went to their one bowl game every 20 years last year, that shit is done. I said it in the podcast, I'll repeat it now, Baylor will suck this year and won't make a bowl. The Horned Frogs win big, 35-10 (and they only reason it's not 70-10 is that Gary Patterson isn't a dick like Bob Stoops. That's my buzzed Bob Stoops hate for the week).

So there we go friends, I encourage you to tell me how wrong and am and why I'm an asshole in the comments section. Also, you can consider this your open thread for TCU/Baylor tonight, I'll be here, (if I don't pass out) and I hope you'll join me.

(A "skylab fallout" is pretty gross, but it's got 5 shots of booze in it, the night is on)