Share All sharing options for: Picks From Joes Week 4

We's in a hurry today people, so this is gonna be quick. After last weeks dominance I am 22-3 on the season, and looking to keep the dream alive today (what dream you ask? Good question, just seemed like an appropriate comment), and keep up the hate. Much like two weeks ago, there are only 5 games to pick (what the hell with all the early bye weeks? Pussies), so lets get it going.

Well, Baylor continues it's march towards back to back bowl games, something that hasn't happened since the 91 and 92 seasons, while Rice continues it's march towards a second straight losing season in conference USA. The Bears have had one decent test so far this year, and that will continue after this weekend all the way up until October 15th, when they travel to Kyle field to face the Aggies. While I think Baylor is over-rated (clap clap clapclapclap), I think they will kick the donkey shit out of Rice (Texas beat them with Gilbert at QB, holy shit thats bad). Bears win easy, 45-14 (click the jump damnit)

Tech continues pulling off it's best Missouri impression, and are vying for pussiest schedule in America, facing off against heavyweights Texas State, Nevada, and New Mexico in the non-con, it what I can only assume is an attempt to make themselves feel better about the fact that they will lose an easy 5 games this year, maybe six. Tech brings the number 3 offense against the number 108 defense, and a repeat of last week is likely. Doege (how the fuck to you pronounce that? Doug? Do-ge? who knows) will probably have another 400 yards and 5TD's, and Tech will keep the scoring up while the competition is low, winning 45-6

Kansas State at Miami (not of Ohio)

You hear that faint moaning sound? Sorta like a cross between and old lady getting banged and a cancer patient slowly dying? That's the sound of the Wildcat season preparing to die this weekend in Coral Gables. Bill Snyder can't stop it, that Eco-whore can't stop it, hell, nobody can stop it. Miami could have the cheerleaders and so fans in and still win this one. KSU has no offense. If they had 1/10th the offense we did I'd say they have a chance, sadly they have about 1/100th the offense. For the season, KSU has 47 points and 600 yards. We do that in one game. Miami wont return to the glory of "The U", but they will kick the shit outta the 'cats, 35-3. (And I hope they do, for this 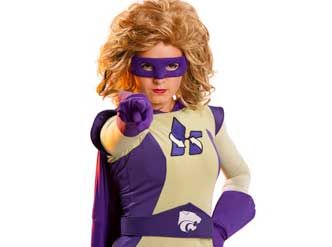 How terrible is that? Holy shit, it offends the eyes.

Is there a chance that Oklahoma, riding so high after last weeks huge win, could suffer an emotional letdown this week? Is there a chance that Missouri could ride that into a close game? Perhaps, just perhaps, even force Bobby to bring the Stoops-face out again? Sure, for about the first 7 minutes. After the 3rd stringers could kick Mizzou's ass. Missouri isn't that good, and OU won't meltdown nearly enough to even keep this laugher close. By halftime it will be out of hand, and the gooners will roll, 55-10.

Game of the week here bitches, get ready. The 12th man will wish he was at the bottom of a rubble pile when this game is over, and their season is as well. I've been listening to all these OU assholes on the radio all week, talking about how many points we've given up, how many yards we've surrendered, and how our offense is suspect. Fuck all that, our D is fine, just some weird games early. In game one the starters gave up 3 points and 145 yards, Weeden made it look worse with 2 pick 6's. Game two, we gave up 41 rushing yards. Sure, we gave up like 400 passing, but that's all they did, and we still held them to 14 points. Against Tulsa we were up by 30 at the half, and basically stopped giving a shit. Sure, the Ag's will get a few yards, and a few points, but it won't be nearly enough, as the Pokes make a fucking statement, winning 45-30 on the road. (And at least 10 of A&M's points will be in garbage time).

As always, tell me why I'm wrong and why you hate me (should have plenty of reasons today)