Quick post here with a quick stat. One of the big discussions in the transition from Holgo to Todd Monken/Gladstone was whether the offense would "play slower", thus giving the Pokes more of a time of possession advantage and give the defense a rest, or if they would continue at the pace of last season.  There has been information pointing to either scenario in the preseason, but now that we have one game under our belts I wanted to take a look at how the tempo of Game 1 vs ULL matched up with the tempo from last season.

In 2010, the Cowboy offense averaged 75.5 plays per game, and averaged 27:41 time of possession. This worked out to 2.75 plays per minute of gametime that the Cowboys had the ball.

In Game 1 of 2011, the Cowboy offense ran 87 plays, and had the ball for 29:00 minutes.  This worked out to a 3 play per minute of gametime average during the Cowboys possession time.

So not only did the Pokes play at a similar pace to last season, they actually ramped it up a bit from the 2010 average. In fact, there were only two games last season where the Cowboy offense operated at a quicker pace (Texas A&M and ULL), and one game where they played at the exact same tempo (K-State).

Here is a look at the tempo for each game last season, with last weekend's game thrown in at the end. 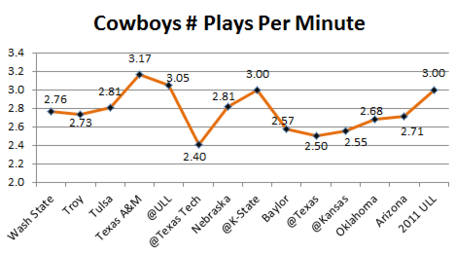 Sure it was one game, and as Royal mentioned in his post this morning there was some obvious experimentation going on, but the offense seemed happy to lineup and snap it as quickly as possible, and the stats seem to back up that for now, the Holgo tempo is still in effect.