Share All sharing options for: Tips For Avoiding the Thursday Night Curse

Here we are today awaiting tonight's Thursday night matchup against our future Pac-28 brothers, the Arizona Wildcats.  The game is at the comfortable home confines of the Boone, and is against a team we beat handily 9 months ago in the Alamo Bowl.  We have to play against a Stoops, but even 'Zona fans would have to agree that Mike Stoops is the Billy Carter of the Stoops coaching family.  OSU is favored in Vegas by more than two possessions, and seems to have the offensive firepower in spades over Arizona.

For the last two years, OSU has played in high profile, Thursday-night televised ESPN football games.  Both these times, OSU absolutely played like lashed-together dogturds personified, but still won the game.  Or, more accuratelly, OSU played like lashed-together dogturds personified in black uniforms for two quarters, then played well the other two quarters.  Some say the poor performances had something to do with these black uniforms. Yachoff wrote an entire article on this phenomenon.  If Yachoff was a betting man (and he is, to the point of degeneracy), he would predict black uniforms for the Cowboys tonight as well.

This is Thursday night, everyone's watching, and as recent history has shown, anything can happen.  OSU needs to hedge its bet.  It needs some Thursday Night --good luck-- for a change.   The best luck, of course, is the luck you make yourself...

(A few Bet Hedgers after the jump...)

Four ideas for some homebrewed luck:

1.Convince T. Boone Pickens that Lewis Field is last known refuge of the "Lesser Prairie Chicken" and he will dig the field full of holes looking for these little rascals' pelts.  OSU QB Brandon Weeden will know where these holes are located in advance, Arizona QB Nick Foles will not.

3. Hang mirrors around the sidelines of the Boone so Mike Stoops can see the ridiculous array of facial expressions he makes, like for example this:

or, more reflectively, this:

or, just full-on, drool on your lower lip crazy: 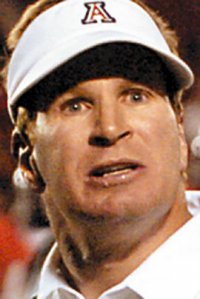 Stoops sees his contortions in the Boone mirrors and they mesmerize him into total Cowboy submission, not unlike a modern day Narcissus.

4. Tell the Cowboys that Jenn Brown is waiting for them in the locker room win or lose.  But if they win, Erin Andrews will be there too.