Last week I had the opportunity to talk with former QB great and current college football analyst, Doug Flutie.We talked about OSU football, the sham that was the BCS Title game, and about his involvement in the Capital One Cup. However, I did not get a chance to ask him to sign my box of Flutie Flakes....or did I? 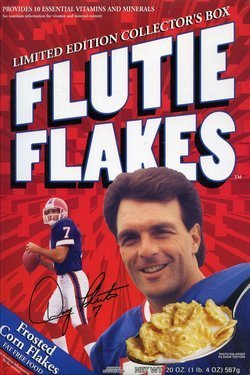 Unfortunately, the audio recording ended up being less than stellar (awful) and thus I've spent the last several days since the interview trying to make it somewhat bearable.

So as a last resort I transcribed the conversation (skipping all of my giggles, of course) for everyone to read. Also, keep in mind this interview took place right before the BCS National Championship.

CRFF: Jumping right into it, from an excitement stand point are you looking forward to the game tonight or would you have liked to have seen a more offensive game?

Doug Flutie: I enjoy offensive games. I would have loved to have seen Oklahoma State in this one. At least have a team that spreads them out and try to sling it around a little bit.

CRFF: It's actually great that you bring that up because it is our position that regardless of whether or not Alabama is a better team, OSU deserved to play in the national championship game because they had a better resume and strength of schedule than Alabama did. What are you thoughts on that?

Doug Flutie: I think you need to look at the resumes throughout the year and Oklahoma State's resume was very impressive. But I think the deciding factor is that we talk about college football being a full year playoff where you cannot afford to lose a game. Every week matters. Well you know what? They (Alabama) had their shot. Alabama had their shot against LSU and lost. The only thing this is going to cause is that if Alabama wins this game that LSU can say "Well we have identical records, we just played head to head, let's play a third game." It doesn't really solve the issue...The bottom line is that I think Alabama is the stronger team but I would have loved to have seen a different style of offense try to attack LSU.

CRFF: You aren't going to hear any arguments from us on that. With that said, do you think college football needs a playoff?

Doug Flutie: Yeah, I think so. I think the easiest way to do it is to keep the current bowl system and play a "Plus One" with the one (seed) versus the four and the two versus the three and then have the National Championship game a week later.

CRFF: Jumping back to Oklahoma State really quick, being a former quarterback what do you think of Brandon Weeden?

Doug Flutie: Yeah, he's fantastic. He throws the ball extremely well. And having a guy like Blackmon on the other end--I've always said that a quarterback needs a go to guy. You need a dominant receiver...that when he's one on one (the quarterback) can just throw it up to him and he'll make a play. Brandon Weeden has done a great job all year long distributing the ball and making plays in the passing game as good as anyone in the nation.

CRFF: You played a couple years with one of our former great players, Thurman Thomas, while with the Buffalo Bills. Do you have any stories or memorable moments on the football filed with him?

Doug Flutie: I loved Thurman in the backfield especially on third downs. I had just came back from playing in Canada and we're doing blitz pickups in nickle situations, dime situations...and the responsibility falls on me to make all the reads as far as pass protections. And if I made a mistake in a game situation...and told someone to pass protect to the right, Thurman would come up and pat me on the side and say "No, no. Maybe he should come over here." He was great to have back there to safe guard for me especially on third downs. It was a lot of fun playing with him.

CRFF: Can you explain a little bit about your involvement with the Capital One Cup and how it works?

Doug Flutie: The Capital One Cup is a program that awards the top division one level men's and women's athletic programs in the country. It awards the schools points based on how well their different sports teams do with an emphasis on national championships won that year. The best men's program and best women's program in the country are each awarded $200,000 scholarships and the Capital One trophy.

CRFF: That's great because lower profile sports and programs don't always necessarily get the recognition they deserve but still work their butts off every day.

Doug Flutie: Exactly. And it also brings awareness around the campuses and a feeling of camaraderie. Football players are now showing up at soccer games, other athletes are paying attention to field hockey and girls volleyball and such because they want to know how they are doing in the standings. It's really great for everyone involved.

CRFF: Thank you so much for taking some time to talk with us today!