Garth Won His Lawsuit, So Here Is A Flowchart

Share All sharing options for: Garth Won His Lawsuit, So Here Is A Flowchart

OSU's most famous alumnus Garth Brooks won his lawsuit over Integris Hospital of Yukon on Tuesday evening. Proving there are no fences in Rogers County, OK on finding sympathetic Garth fans to fill a jury pool, Garth was awarded $1 million, doubling his original $500,000 gift to the hospital. Garth remains committed to putting his mother Colleen Brooks' name on a hospital woman's center in Yukon, but said this honor would not be bestowed upon an Integris hospital.

All this legal Ropin The Wind has been sure to leave you, the OSU fan, In Pieces. Integris Hospital of Yukon forgot that Brooks' resources in this part of the country give him an exhaustible amount of Fresh Horses. Lest the bestowed forget, when Garth gives you a donation, he is always gonna be coming up Sevens. That is all the puns Yachoff can muster without a new Garth Brooks studio album in 11 years.

We are fans of Garth in Stillwater. Stillwater is where Garth was minted, and his stratosphere career has carried a piece of Stillwater with it. But there are fans in Stillwater, and in the world at large, that are fans in a less traditional sense. These are the Ironic. They like Garth because they think it is uncool to do so. The Ironic cannot be considered detractors of Garth because they help Garth's career by consuming his product, but they only do this a living reminder to the world that they are so hip that they, the Ironic, can survive Garth's un-coolness without detriment. Interestingly, there has arisen a subset of Ironic folks who may have started out as only Ironic, but by immersing themselves in the sweet, back-alley jubilation of the Garth, are able to transcend irony and realize that Garth Brooks is not an inhabitant on a plane where cool/uncool exists, he simply IS, and that we should all strive to be a little less caring about what other people think. Don't take Yachoff's word for it, crank up "The Dance", put on your best checkered shirt, and flow: 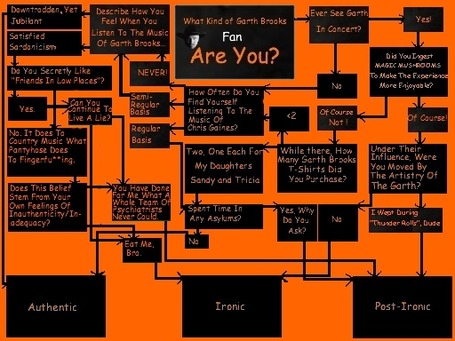