What do you get the Sooner fan in your life (besides a soul of course) for Christmas/Birthday/Being released from Federal custody? This

There's only one.....OU. Thank fucking god, because if there were two we'd all be screwed. I would normally scoff at something like this, perhaps have a chuckle, and then move on, not stopping to take a picture or tell anyone about it. But last night as I was heading to check out with some cat food (God damn cat's and their need to eat) I noticed the single most pathetic piece of OU branded merchandise I've ever seen. I present you, the OU donkey head bath poof. 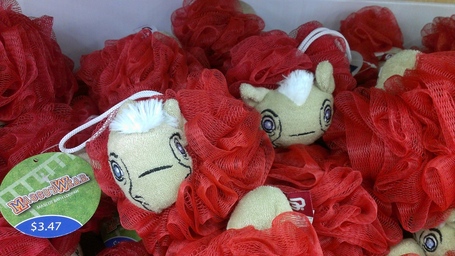 Yes, for $3.47 plus tax, you can clean your ass with an official licensed University of Oklahoma horse donkey alien thing. The perfect shower companion to your officially licensed soap, shower curtains, towels, and padded toilet bowl seat. Great for cleaning up after a long day working at the Jiffy Lube.

Ah, yes, the story. What made this perfect (besides the fact I actually saw a child begging for one), was the middle aged woman in line in front of me, smelling of three day old beer and pot, trying to buy one of these on a food stamp. Sure, it turned what should have been a 30 second checkout into a five minute ordeal, but she would not be denied. Except that eventually she was, and had to choose between what appeared to be Misty 150's (longest pack of cig's I've ever seen) or the poof. She took the cigs.