The only Oklahoma State/David Mamet blog post you will read all week. A one act play staring T. Boone Pickens. Viewer discretion advised.

(T. Boone Pickens stands before members of the Oklahoma State defense. The D-line is absent. It wasn't necessary that they attend this special meeting. A cornerback stands in the back by a Gatorade jug. A safety sits nearby.)

T. Boone Pickens (to cornerback by a Gatorade jug): Put that Gatorade down!!. Gatorade is for defenders. (cornerback scoffs) Do you think I am fucking with you?!? I am not fucking with you. Holder and Gundy asked me here tonight. I’m here from Holdenville. I’m here on a mission of mercy. You call yourself a secondary, you son of a bitch?

Cornerback: Excuse me? I don’t have to listen to this shit.

T. Boone Pickens: You certainly don’t pal. Because the good news is --you’re fired. The bad news is you've got, all you got, just one week to regain your jobs, starting tonight. Oh, do I have your attention? Good. Because as you all know, first prize is another Big 12 championship ring. Anyone want to see second prize? Second prize is a set of steak knives. Third prize is you’re fired. You get the picture? You laughing now? 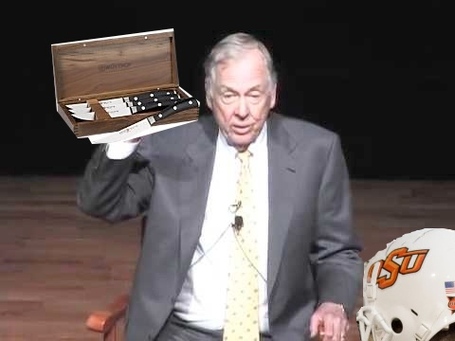 T. Boone Pickens: Fuck you, that’s my name! You know why, Mister? 'Cause you drove a Hyundai to get here tonight, I flew in a Lear jet. That's my name! And your name is "not receiving votes." And you can’t defend shit. Kansas, the weakest team in the league, could mop the floor with you.

(Pickens flips over a blackboard which has a set of letters on it: ABD)

T. Boone Pickens: A-B-D. A-always, B-be, D-defending. Always be defending! Always be defending! You got the conference teams comin' in; you think they came in to get out of the rain? Guy doesn't come into Stillwater unless he wants to LOSE. Sitting out there waiting for you to beat them! Are you gonna take it? Are you man enough to take it?

(Takes out a spiral bound notebook)

T. Boone Pickens: These are the new plays. These are the Glenn Spencer plays. And you don’t get them. Because to give them to you is just throwing them away. They’re for defenders. What's the problem pal? You. Safety.

Safety: You’re such a hero, you’re so rich. Why you coming down here to waste your time with a bunch of bums?

(Pickens sits and takes off his watch)

Safety: Yeah.
T. Boone Pickens: That watch there cost more than your car. It has a laser on it, and it is powered by the wind. I’m worth $1.2 billion dollars. You see, pal, that’s who I am.

Cornerback: I get it. You’re rich.

T. Boone Pickens: You think this is abuse, asshole? You can’t take this, how can you take the abuse you get in a game? Get mad! You know what it takes to be a defender? 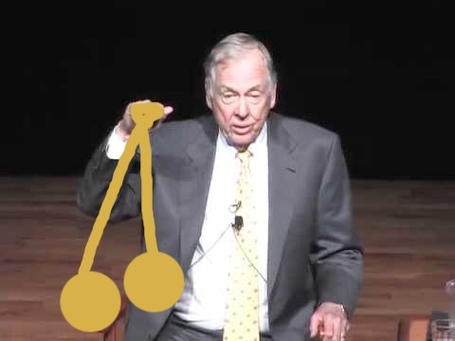 T. Boone Pickens: It takes solid gold balls to be a defender. The wins are out there, you pick them up, they’re yours. You don’t--I have no sympathy for you. Now get out there and fuck Kansas up!