Upon further analysis, I may have been a tad harsh in my initial review. Just a tad.

I was busy putting together my full recap when I ran across this pic tweeted by Cory Brown, showing Siri's response when he asked for the result of the OSU-WV game... 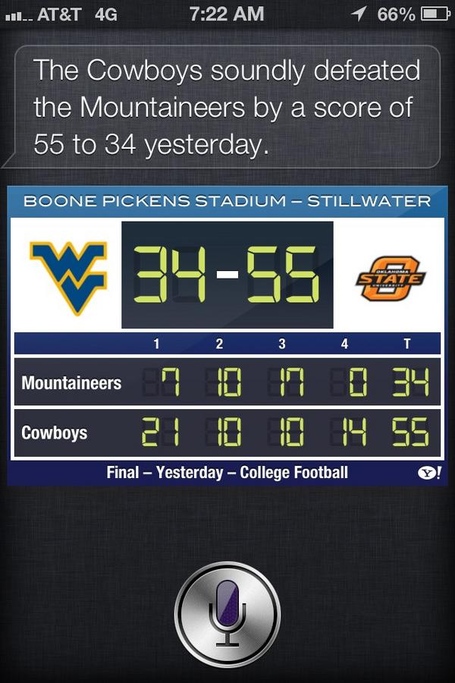 Then I watched this:

...and I immediately scrapped everything I had written. Well, not quite everything, just the really ultra critical parts.

My instant analysis from yesterday was pretty harsh on Monken and what felt like a pretty conservative game plan. Then I stepped back, a little bit, and remembered how OSU had lost some games this year.

It is always easy to parse out elements of the game to show how WELL the Cowboys played in defeat. I have been particularly expert at doing that.

But in the end, those elements we like to parse are part of the game, and Saturday at BPS OSU was the beneficiary for the first time this year.

AND I'M REALLY GLAD THEY WERE.

Monken and the offense will not totally escape, as they only produced 31 points completely on their own against the 2nd worst defense in the Big 12. The game was about extremes for this group...take away the 3 "short field" possessions, and 5 of 11 drives ended in punts. The ungodly conservative play calling when OSU took over on downs at their own 2 yard line said to me "I'd rather give up a safety than a pick 6." I was shocked at how many times WV ended up in the OSU backfield, whether on running or passing plays.

That being said, the Cowboys averaged 6.7 yards per play, and had only one TD play shorter than 20 yards. Chelf's interception is ALL on Charlie Moore. Chelf made good decisions all day, but constantly struggled with high throws. Two targets of Blake Jackson probably should have been intercepted, and Josh Stewart made several great catches. To his credit, Chelf was on the money on OSU's TD drive to start the 4th quarter, going 5-7 to cover 78 of the 80 yards. The Cowboys only rushed once on that drive.

On that last point...I stick to my guns with my critique of the running game. Kansas set the blueprint. Sell out to stop the run and force the inexperienced QB's to win the game with their arms. Randle/Smith/Roland have had one rush longer than 21 yards in that time span, a 62 yard dash by Randle against Iowa State. It should be noted that outside of that one play, the longest run from scrimmage in that game for someone not named Walsh or Stewart was 9 yards. Injuries have played a role in forcing Randle to be an every down back, which he can be for a game or two, but not for a season. The Cowboys need at least one other dependable guy to be healthy to spell Randle and keep the rushing attack fresh. Minus Stewart's TD, OSU managed 105 yards on 34 carries...a paltry 3.1 average by our standards.
As far as the defense goes, they played another admirable game. Giving up 27 points to West Virginia (the TD after the interception is not on them) is a decent performance, and I will argue just another in a long line of performances this season that were good enough for OSU to win the game (and yes, I'm counting Arizona). The caveat here is that Geno Smith has suddenly figured out how to miss wide open receivers. He whiffed on a number of throws to the sideline, and missed badly on two wide open deep throws.
And it was nice to get several POSITIVE Justin Gilbert sightings. While he got caught a number of times in his "soft" short coverage, he did break up two passes that would have been TD's.
Oh, and just in case you have forgotten how fast he his, there is this pic from his first kick return TD of the year, courtesy of Nate Billings at NewsOk... 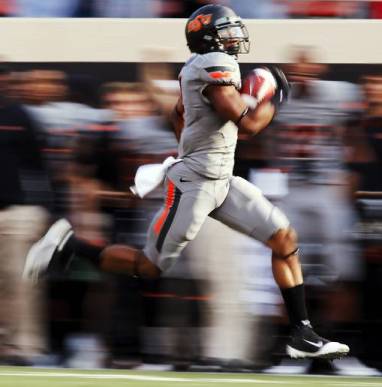 Anyway, it was nice to finally get some of what we expect from Gilbert.

As for special teams, well, if there's any way for Quinn Sharp to win Big 12 POY, then I'm for it. Too bad they only give out offensive and defensive, and not overall. Didn't realize this until after the game, but he hasn't missed a FG inside 44 yards this season. Oh, and he has figured out how to execute one of the most difficult to field squib kicks ever. Nice weapon if he can't kick it deep enough to avoid a return. His punts were spectacular, and the 74 yard strike into the wind after OSU was stuffed at their own goal line was nuclear.

It is often said that if you win the turnover battle and special teams, you should win the game. OSU definitely did that yesterday.

All in all, a good showing for the Cowboys. Now it is on to Texas Tech and a depth chart that will likely show "Chelf OR Walsh OR Lunt" at QB.