A.P.'s Lodge, Part III: Willie and the 16 Goals For Failure

When we last left the lodge things had frozen up for Pistol Pete, Willie the Wildcat, and all the other mascots whose teams peaked at second place historically in the Associated Press poll. This season, Willie the Wildcat and Kansas State threaten to make a break out of the lodge and into first place for the first time in school history. However, this lodge has a way of keeping its clientele.....

Share All sharing options for: A.P.'s Lodge, Part III: Willie and the 16 Goals For Failure

(This post is the third in a series. Go back to the beginning here, and to the second part here. ) 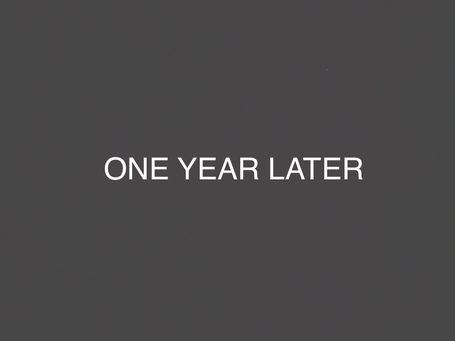 ( Enter A.P.’s Lodge of Broken Dreams. Pistol Pete sits at a bar tended by the Duke Blue Devil. Willie the Wildcat is down a few chairs. Sparky, the Arizona State Sun Devil is also there. Pistol Pete has been here only a little while compared to Blue Devil, who gives off a primordial vibe. Willie looks cagey, and Blue Devil is keeping a close eye on him. ) 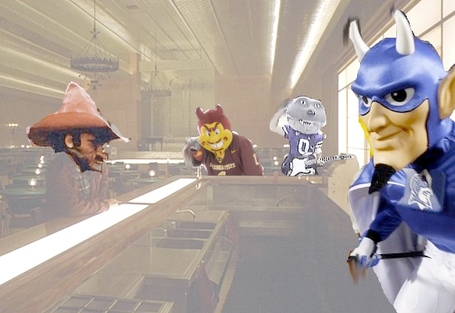 Pistol Pete: So the field goal was really good, but they called it no good, and we lost. Can you believe that? ‘Nother Schlitz, Blue Devil. White Man’s Burden.

Blue Devil: Coming right up, Mr. Pete. I know that it was a disappointment for you to lose that game, but I’m glad you came to join us. How are you finding the accommodations?

Pistol Pete: You know, when I first came up here I had this feeling that I had been here before. I mean, we all have our moments of deja vu, but this is ridiculous... It was almost as if I knew what was going to be around every corner.

Willie the Wildcat: We’re all like that Pete. We’ve all always been here. Don’t you get it? We were all destined here. Unless we can break the cycle.

Blue Devil: Oh, Willie. How many times have we heard that out of you? You shan't be breaking out of anywhere. I have my full confidence that Mr. Pete stops you from leaving our hotel. Isn’t that right, Mr. Pete?

Pistol Pete: That’s right, Barkeep. You were always the best of em. Best damn bartender from Timbuktu to Portland, Maine. Or Portland, Oregon, for that matter.

Willie the Wildcat: Well, I think we have quite a team ourselves. Colin Klein is quite the running threat. And I think the BCS this week might agree that our team is number two with a bullet. Number one is only a mater of time...

Sparky, the Arizona State Sun Devil: BCS COMPUTERS BLOW! THE AP POLL IS ALL THAT MATTERS UP IN THIS HIZZ-HOUSE! DEVILS ARE O.G., WE LIKE OUR RANKINGS OLD SCHOOL. BESIDES, YOU’LL NEVER GET ON TOP OF THE CRIMSON TIDE! THEY GOT THAT SHIT ON LOCK, YO! YOU AIN’T NEVER GONNA GET NUMBER ONE! YOU’LL BE HERE FOREVER JUST LIKE THE REST OF US, YOU PURPLE HALF-HUMAN CAT FUCKER!

(Everyone except Willie laughs)

Willie The Wildcat: We'll just have to see who’s better. I’ll be out of this purgatory and into number one in no time.

Blue Devil: There is really only one way to settle this argument...

Willie the Wildcat: Not the hedgemaze... 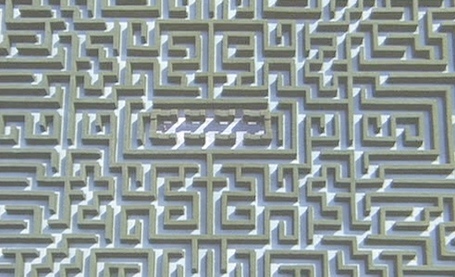 ( The mascots go outside to the hotel hedgemaze. Blue Devil presides over this competition. Both Pistol Pete and Willie are given double-barreled shotguns, a six-pack of Schlitz, and a copy of Bill Snyder’s motivational pamphlet: "16 Goals for Success." )

Blue Devil: Alright, Wille, Mr. Pete. You know the rules. No climbing the hedge, no going through the hedge. If you need more Schlitz, it will be air dropped to you. You may consult the pamphlet I’ve given to you, Bill Snyder’s "16 Goals for Success.", for hedgemaze navigational tips and general life strategies while you are in the hedgemaze. First mascot out of the hedgemaze alive, wins. Any questions?

Willie the Wildcat: No.

Willie (to himself): Alright, just relax, put a Werther's Original in your mouth, and let Bill tell you what to do. Remember numbers one through three. 'Commitment', 'Unselfishness', 'Unity. I must commit to the hedgemaze, be unselfish about finding my way out of the hedgemaze, and unify...

That’s okay, Numbers 10 and 11. ‘Don’t give up’, and ‘Don’t accept losing’. A little redundant, seems like a good place to round to fifteen there, but sage advise nonetheless.... 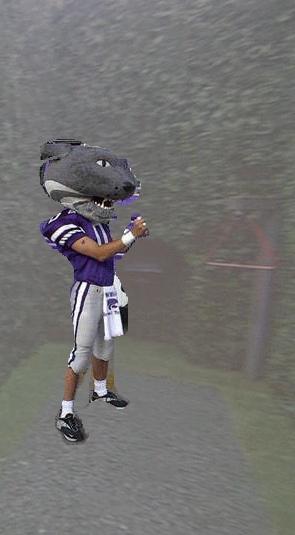 No worries. Four and five. 'Improve', 'Be tough'. The lessons are so obvious once Bill writes them down for you. With these goals for success, I’ll be out of here quicker than you can say "Bill Snyder Family and Friends and Likeminded Acquaintances Memorial Field and Stadium For Fun and Fellowship".

(Meanwhile, Pistol Pete sneaks up behind Willie, who is furiously engaged in the pabulum of a grandfatherly college football coach, and presses his shotgun into the part of Willie where the human body turns to cat head. ) 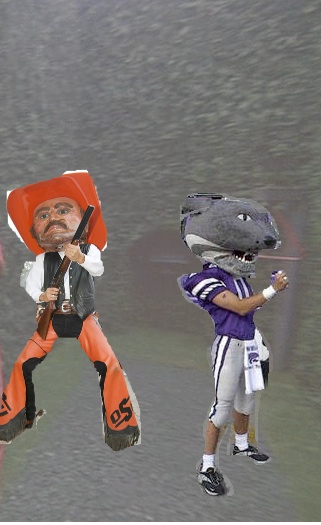 Pistol Pete: YOU GOT A BIG SURPRISE COMING TO YOU, WILLIE. YOU’RE NOT GOING ANYWHERE!

Willie: (pleading): Pete, listen. You’ve got to help me break the cycle and get out of here. This season could be my only chance to get out, don’t shoot me. I’ll just be re-animated later on by Blue Devil anyway. It’s just that the blast really hurts.

(Pistol Pete unloads both barrels into Willie’s amalgamated cat/man neck. Willie falls to the ground in a heap, and Pistol Pete pauses to call in a Schlitz drop. )