Here's hoping we see a lot of this on Saturday.

Day two of Bedlam Week, and I'm jumping on my favorite Sooner whipping boy, Landry Jones...or as I will refer to him this week, Laundry Jones.

Have as much fun with that as is humanly possible.

I don't know about you, but it feels like Laundry has been there 8 years. I mean how many times can a guy get tagged as a Heisman favorite only to shit the bed every time.

2012 has been the usual tale of two Laundry's...good Laundry and bad Laundry...often in the same game.

But his overall numbers are improved from previous seasons.

But while he is averaging fewer interceptions...8 on the season so far... the last 4 games have seen 5 of those picks. The Sooners are giving up the 2nd highest average # of sacks per game of Laundry's career, and while that is almost any QB's achilles heel, it is especially true of Laundry. Need I remind you... 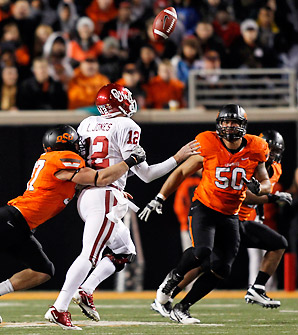 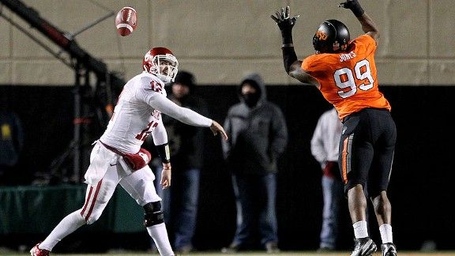 Laundry is about to face a defense the level of which he has not experienced since the loss to Notre Dame (0 TD's, 1 INT, 13 pts). Not saying the Cowboys D is that of the Irish, but it's definitely better than Iowa State/Baylor/West Va. This defense is better than last year's version that demolished Laundry in Stillwater. Better than a defense that didn't allow a TD until the 4th quarter on a Belldozer run when OU had already given up. A defense that is getting healthy and starting to assert itself.

Maybe Laundry should give Seth a call...find out which direction he should practice running.

And where he gets his jersey cleaned.