Two consecutive seasons have seen a Big 12 candidate for the national championship cannibalized by it's own conference brethren. Last year, OSU was sent packing out of the number two spot in the A.P. by Iowa State, and last weekend Kansas State was rolled back to Manhattan by the Baylor Bears. This was not good news for Willie, who had his bags packed as the number one BCS team expecting to take over the top A.P. spot soon enough. Willie found out, however, that the lodge has other plans for him...

Share All sharing options for: A.P.'s Lodge IV: The Big 12 Eats Its Own Head

(Enter the bar of "A.P.‘s Lodge". Wille the Wildcat, Raider Red, Pistol Pete, and West Virginia Mountaineer all sit at the bar. Willie is quietly, but noticeably, sobbing. Willie is beginning to realize that he may be here in this lodge forever. Duke Blue Devil leers over his Big 12 clientele from behind the bar like a vulture leers over vanquished prey.)

Blue Devil: Another Schlitz, Mr. Wildcat? I understand you'll be staying with us after all....

Willie (exasperated): I don’t know what happened, Blue Devil. Three interceptions? That’s not using #7 or #9 of Bill Snyder’s Sixteen Goals for Success. No, sir.... The only goal of Bill’s three interceptions follows is #14, "Consistency". Any chance to be number one in the A.P. poll this year is over. Gone! (Sob...)

Raider Red: Yeah, and against Baylor, too. You must like it here in the lodge. Goals for Success? Your team needs to try locking players in closets. Now that's team motivation.

Willie: Bill would never do that! He just pats the players on the head, asks them if they did their best, then gives everyone a 'Werther's Original' for trying. (quietly)But Bill's tactics don't matter anymore. The Wildcats and everone in A.P.'s Lodge are stuck here forever. 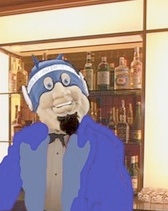 Mountaineer: Oh! To be number one! Just to have thy associated wordsmiths approving glance meet thine eye would teach sofa torches to burn bright! Such stuff as dreams are made on! But here I sit, in limbo, like Patience on her monument, with a five game losing streak, having been ranked #5 in all the land only a fortnight ago. Men at some time are masters of their fates. The fault, dear Willie, is not in our stars, but in ourselves, that we are underlings...

Willie: (....Sob) I don't know what that means Mountaineer, but I know that there's a conspiracy in college football. There isn’t even a Big 12 Title game anymore so we can redeem our season. Our conference doesn't have the same clout as it used to before realignment. Everything is all about the SEC now. Nobody cares that the Wildcats and the Big 12 are totally out of it. The Disney-run sports media wanted the Wildcats to lose! Now they’ll get to see their beloved SEC and their beloved Notre Dame in the championship... There is no room for us anti-establishment teams. Getting out of this lodge was never going to happen. None of us will ever see the light of day.

Pistol Pete: (wanting to say something positive, but coming up short) Uh, hmm....You might still get out. Just hope that you beat Texas, and that Notre Dame, Alabama, Georgia, Florida, and Oregon all lose. (unsure) It...could....happen. Look, I was in the same boat as you last year. You had an off-night, we had an off-night...It happens. I swear, it's like this conference has eaten its own head the past two years. But you’ll have another shot at numero uno some day. We all will.

Mountaineer: Cowards die many times before their deaths; The valiant never taste of death but once!

Pistol Pete: Damn straight. If I get another chance, I am out of this stinkin' hotel.

Willie (irate, beligerent): Coward? At least I was able to take another shot! We never saw it coming. I mean Baylor? They had only beaten Kansas. We should have annihilated the Bears. This season was my best shot at the moment in the sun, and now it is going to be another decade at least of drinking second-rate beer, hedgemaze deathmatches, and listening to Chief Illinowek rattle on about Dick Butkus' 372 tackles at Illinois, or Raider Red about Michael Crabtree, or Pistol Pete about Justin Blackmon. (Sadly) I really fear that things are going to "get choppy" in here. And I'm talking with an axe.... What I'm saying is, I might possibly do violence to everyone in this lodge with an axe.

(Things are uncomfortable for a moment, but Willie says a lot of things he doesn't mean when he's been drinking.)

Pistol Pete: Who knows? Maybe next year sees one of us getting to the other side. Unfortunately, next year will be another year of BCS turmoil. But then, the year after that, there is hope. A playoff system that will give even the Duke Blue Devils a fair path to a national championship. We will all get out of this purgatory someday, gentlemen. The question is only: when?

Sparky, the Arizona State Sun Devil: (poking his head in the bar room door) HEY GUYS, I'M GOING TO GO FUCK WITH THE KU JAYHAWK. THROW SOME FIRECRACKERS IN HIS CAGE. THAT BIRD GOES FUCKING CRAZY! IT DONT LIKE THE NOISE OR SOME SHIT. WANT TO COME WITH?

Raider Red: That sounds like fun. This place isn't all bad.

Pistol Pete: No, Raider Red. It wouldn't be right. Us Big 12 second-place AP'ers have to stick together...

Mountaineer: Indeed. When shall we meet again; In thunder, in lightning, or in rain?

List of Big 12 Teams That Peaked at #2 in the Associated Press Poll, Number of Years With an Appearances at #2, and Dates of Last Appearance: 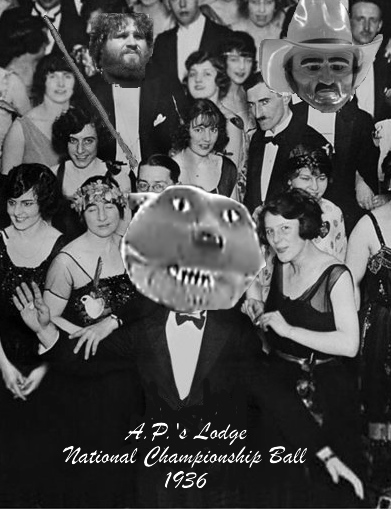 PISTOL PETE WILL RETURN IN: "A.P.'s LODGE V: A MASCOT FINALLY GETS OUT OF A.P.'s LODGE"