After an OSU punt, the defense shows some mettle.

The soft zone we have come to despise.

The pass coverage that allows a WR to set up shop, unmolested, at or just past the yardage required for the first down.

As we see in the picture above, the first down line is the 30 yard line.

Only the 2 outside receivers are "manned up," but even those are in 7-10 yard soft coverage. I would presume that, following the snap, the deep safeties would move up. 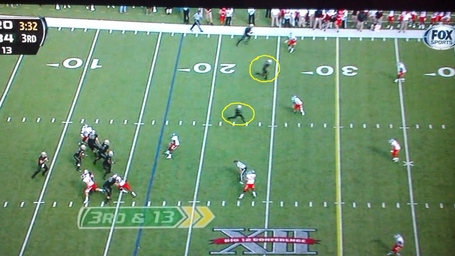 As we can clearly see, the three deep safeties have BACKED UP even deeper. We will ignore the receiver on the near side as the QB is clearly tuned into the 3 receivers on the far side, and I'm pretty sure he already knows who he will throw to. You can see there are 2 receivers running pretty much uncovered 5-7 yards downfield. 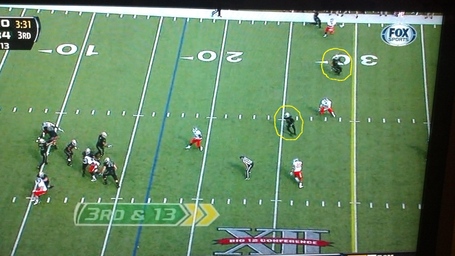 So here are the two receivers the QB is zoned in on. The two deep safeties aren't even in the picture. The outside receiver is in single coverage. The short LB (Lewis) has not dropped very deep in coverage and the deep LB is focused on the inside receiver, essentially leaving the other receiver COMPLETELY UNCOVERED NEAR THE FIRST DOWN MARKER. As the QB releases the ball in that direction, the LB breaks on the short receiver. The CB on the outside has turned his head to see the pass is going to one of the other receivers, so he begins to break on the ball. 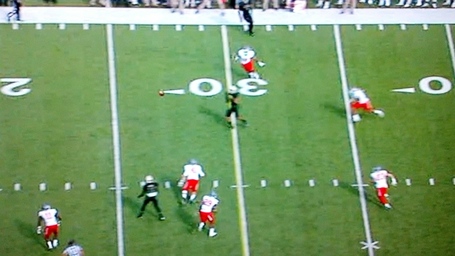 And here we see the ball a split second from being caught and not a single defensive player within 5 yards of the receiver, who is standing right on the 30 yard line. In fact, the DB closest to the receiver was actually covering somebody else. The 2 deep safeties on that side, who are now breaking on the ball, still haven't crossed the 35 yard line, which tells you just how deep they dropped after the snap. Remember, they started the play on the 31 yard line.

Now you might point out that the drive didn't result in any points, with Baylor eventually turning the ball over on downs near OSU's goal line.

The drive ate up almost 6 minutes. 16 plays. Pinned the Cowboys inside their own 5 yard line.

This one drive, this one play, represents all that sucks about our defense for the last how many years. When facing top level offenses, they struggle to get off the field. A lot. Last year was more luck than anything with this unit.

The game obviously was not as close as the score indicates. Florence missed a wide open guy deep that would have been another TD on the previous drive that eventually resulted in a FG. Briles surprisingly went for it on 4th down on the drive I highlighted above, when a FG would have been just as much of a dagger as a TD. They also missed two FG attempts. They definitely went a bit conservative later on since they had a 2 score advantage.

Offense doesn't get a pass either. You can say whatever you want about the final stats, this group never seemed in sync. Baylor blitzed relentlessly, with one of those resulting in the pick 6. Remember all the success OSU had on the road over the past 3 years? That has vanished in a haze of penalties, turnovers, and drops. I think it's funny that the QB we all liked to dog about his passing skills has the highest completion %, fewest interceptions, best average yards per completion, best average yards per game, and the best QB rating of the three. We all jumped on the train, but Chelf has clearly shown why he lost the QB battle in the spring. He is not nearly accurate enough to run this offense efficiently. He is consistently high and behind receivers, and those kinds of passes are often tipped and become prime candidates for interceptions. We've seen plenty of those over the past three games.

But in the end, the defense was gashed for over 300 yards rushing. Baylor twice scored on one play, 70+ yard drives..one pass, one run. Some of this can be put on a "Bedlam" hangover. They also played without Castleman, who, along with Barnett, has been tremendous in the middle of that line. Brown was also limited with some type of leg injury.

That being said, we saw the same thing we saw last week...insufferably soft or incompetent pass coverage that allowed teams to sustain long drives. I feel like telling Gilbert to go ahead and leave for the NFL.

This was an incredibly sucky end to a frustrating season, but it had a different feel for me. OSU was only 2-3 plays from being at least 9-3 and vying for a conference title. Like 2010, I think what we saw this year gives us great hope for the next 2-3 years.

As long as they do something about the defense.