Share All sharing options for: THE BAD THING: Crisis At Augusta National

Before reading, it might be best that you inform yourself on the modern woes jeopardizing the way of life Augusta National Golf Club members have become accustomed to in the last 80 years.

(Payne, fervently): I tell you, it won't happen on my watch! Like Hootie said, 'to the point of bayonets'. You both know what will happen! THEY WILL COME BACK AND INFLICT THE BAD THING UPON US! I WILL NOT HAVE THE BAD THING HAPPEN TO THIS PLACE BECAUSE OF ME!

(Pickens): I think you're overreacting, Billy. There is no evidence that leads me to believe in the spirits of--

(Payne, slapping Pickens' mouth shut): DON'T YOU UTTER THEIR NAMES. YOU KNOW OF THEIR TERRIBLE POWER AND WHAT IT WOULD RENDER UPON THIS HOLY COURSE!

(Pickens): Billy, I just submit that nothing is gained in speculating on the existence of ghosts, spooks, or specters. We only need to come up with a plan to protect our club from this current predicament...

(Payne, distraught): There is nothing left to plan. This time they got us, Boone. WHY ME?!! You think ol' Jackson T. Stephens had to worry about times like these? Great caesars ghost boys, my goose is cooked. What will we do when they're MEMBERS? Augusto, you care to weigh in here? 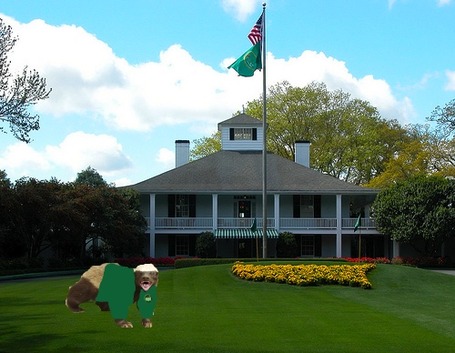 (ON THE EVE OF THE 2012 MASTERS GOLF TOURNAMENT THE STAKES HAVE NEVER BEEN HIGHER. IF AUGUSTA NATIONAL BUDGES AN INCH, AUGUSTA MEMBERS ALL KNOW WHAT WILL HAPPEN. THE BAD THING...)

(Payne): Don't tell me to calm down, Augusto. We're a private club! They can't tell us who to initiate. WE ADMIT MEN AND CERTAIN SPECIES OF MUSTELIDAE ONLY!

(Pickens): Augusto is right. It is only a matter of time before the bad publicity from Augusta National's non-allowance policy outweighs members having to endure... well, you know... the bad thing.

(Payne, quietly): Personally, I'd rather burn this golf course to the ground with a flamethrower, from 'Tea Olive' up through 'Carolina Cherry' and 'Camellia' over the Sarazen Bridge all the way over to to 'Holly', than have to endure the bad thing. The Eisenhower tree a distant memory. (Mumbles) Don't think I won't do it.

(Payne): I know this is your home, Augusto. But what kind of home will this be if we give in? If the bad thing happens? Hord Hardin told me if we let Sandra Day O'Connor into the highest court in the land, it was only a matter of time before the bad thing befell us. Thank God Hord's not alive to see this. He'd be on top of the Crow's Nest with a sawed-off. It's all so hopeless.

(Pickens): Okay, enough. Maybe we should just embrace this thing. We're not gonna be able to sustain our exclusivity on any sort of long term basis, not anymore. There is just too much pressure. Get me the CEO of IBM on the phone.

(Madeline Pickens, Martha Payne, and Augusta, Wife of Augusto the Rabid Masters Honeybadger are in the Augusta National clubhouse with their husbands. All present are dressed in green jackets.)

(Madeline Pickens): Lovey, did you remember to give Poodles her heart-worm medicine? You simply cannot play golf until this is done... 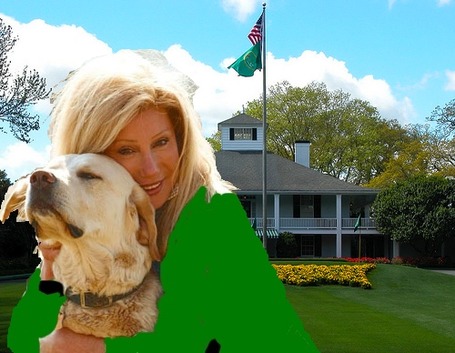 (Martha Payne): William? Why haven't you mowed OUR yard yet? Your golfing fields are all perfectly manicured, but we can't get our yard into the same shape? And the garbage disposal is acting up again. I think you need to take care of your home priorities first. 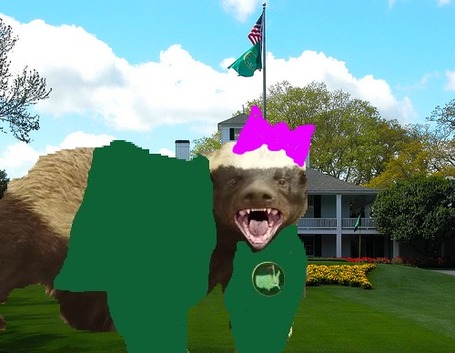 (The spirits of founding members Bobby Jones and Clifford Roberts appear, but only the men can see and hear them)

(Jones): How are you fellows finding the bad thing? Enjoying yourselves?

(Roberts): Golf with your wife in tow is a good walk spoiled. You boys have really done a number on the place. You ought to be ashamed. You deserve the bad thing. There is really only one thing left to do... 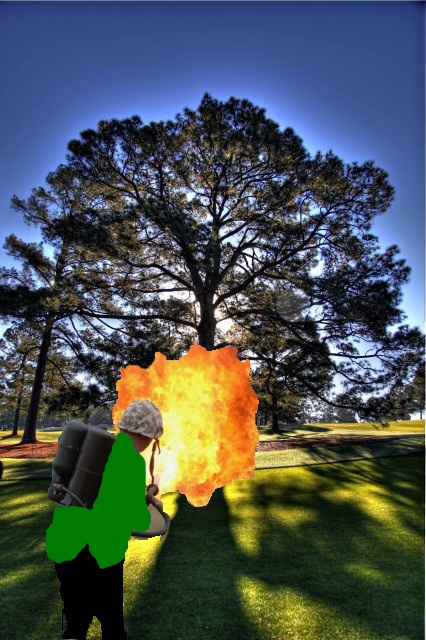