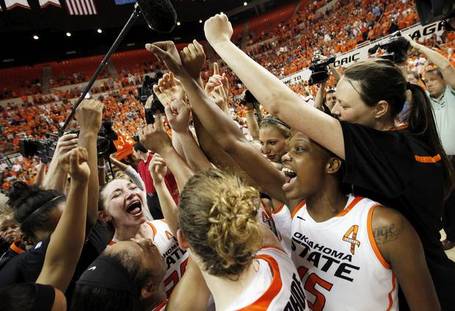 Hows that for a bookend to a season? A season that began with a tragedy, and ended with a championship. The Cowgirls overcame an amazing hardship to accomplish something great this year. I know we don't give much press to women's basketball (or mens for that matter, but I digress), but it's time we acknowledge the great season the girls had this year.

Cowgirl freshman sensation Liz Donohoe (the Big 12 Freshman of the Year) recorded her fifth straight double double in the championship game, Toni Young missed out on a double double by one rebound, and Tiffany Bias (all Big 12 second team) added a double double as well to help pace the Cowgirls past the Dukes.

I think whats most exciting about this is the fact there are zero seniors on this Cowgirl team. Read that again, everybody is coming back. I fully expect us to compete for a Big 12 championship next year (assuming Britney Griner finally has her dick exposed and is forced to play men's basketball next year), and we should be able to make a run in the NCAA tournament.

As I suspect everyone already knows, the team dedicated the win to Coach Kurt Budke, Miranda Serna, and the Branstetters, and I suspect they would be proud with the way the girls played Saturday.