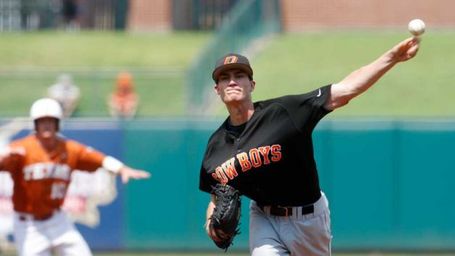 Looking ahead to this weekend's series against Kansas, we have a good chance to get back on the winning track, but I'm beginning to worry it's too late to make a push in Big 12 play. I'll put this as bluntly as I can, if we don't sweep Kansas we're done. Kansas isn't exactly dominant either, with a 12-16 record, but the way we’re playing they have the ability to beat us, and have a better Big 12 record at 2-4. Follow me over the jump and we’ll look at Kansas and the expectations the rest of the way

Kansas has one pitcher with an ERA under 3 (Robert Kahana), three players with a batting average over 300, and 13 home runs. When you compare that to the Pokes we have Andrew Heaney dealing it, with a 1.63 ERA (and everyone else above 3), 3 players with a batting average over 300, and 20 home runs. So really, we’re basically Kansas. How sad is that. The only thing that encourages me about this series is that it's at home, because we're 1-8 on the road (Not that our schedule has helped, we played at Baylor last week, at Missouri two weeks ago, KU at home this week, then to Texas next week).

The worst part about this season is that fact we should have been pretty good. Heaney came back, Randy McCurry is healthy, and Hunter Bailey was looking strong at the end of last year, but outside of Heaney no one is playing up to their potential. We have lost every series (and almost every game) against the decent teams we’ve played. I understand we've played a bunch of new guys (18 I think), but most (11 I think) of those are JUCO transfers, so this isn't their first collegiate baseball game.

If you’re looking for answer’s, I don’t have any. Hell, I don’t even have very many jokes, and don’t really know what to say. I guess it’s good we’re a football school now, but the way we’re playing is pathetic. If Anderson can’t get the team going, and make a run now, it may be time for him to move along. I thought it was all coming together last year, and we crumbled down the stretch and sucked in the NCAA tournament. I'm worried we'll miss the NCAA's all together this year (I know, what a stretch when you're 14-14 and sliding), and I just don't think that's acceptable at Oklahoma State.