I sent out a Tweet on Friday night asking our followers which Oklahoma State player was most likely to be included in the Heisman discussion come December. The response was overwhelmingly Joseph Randle.

Randle finished last season 3rd nationally with 24 touchdowns and established himself as the star of his team heading into 2012. The Cowboys will likely depend on the run a little more than last year and that spells opportunity for Randle to explode. The thing I love most about his potential is that he's truly an all purpose kind of guy. The kid can do it all, and he will.

Now while I agree with him being just about the only realistic Heisman hopeful, there are a couple other guys that deserve a look. Consider this the CRFF Pre-Season Heisman Watch List. 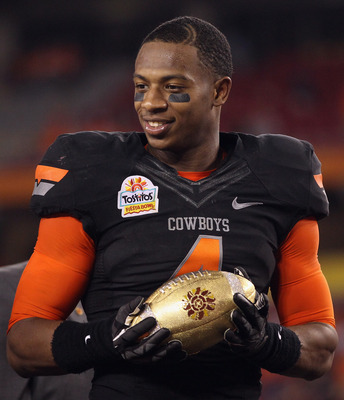 Gilbert made a living picking off NFL QB's in 2011. Can he continue that trend and dominate the return game? He's one of the nation's fastest players and really used his sophomore year to develop into a dependable college corner back. He's currently has 4 kickoff returns for a touchdown (tying the all time OSU record) and he's second all time in return yards at 1411. Oklahoma State hasn't been shabby in the return department, so that fact he's ranked so high says a lot. The junior is coming off a Fiesta Bowl defensive MVP effort and has an entire season ahead of him to improve defensively and develop into an even bigger threat in the return game. Is it a long shot? Yes. But Justin Gilbert is a special player that will do it all in 2012. His stat line could be insane. 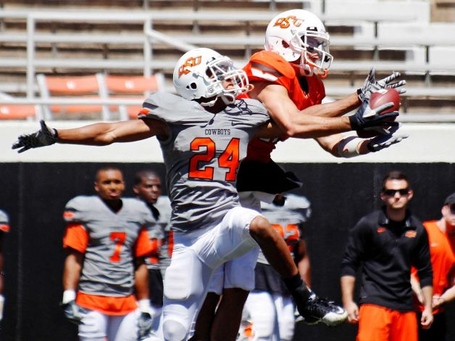 Here's what we know about Charlie Moore. He had a huge spring game, catching 9 passes for 243 yards and three touchdowns. His first catch of the game was a 59 yard touchdown pass from Wes Lunt where he outran Justin Gilbert. He played in every single game last year but was mostly a special teams guy. The dude made some unbelievable catches in that spring game. Can he continue the dominate receiver trend and make it to NYC?

This post was sponsored by EA Sports NCAA Football 13. Check out the video for the game below.