Share All sharing options for: 50 Shades of the Big 12 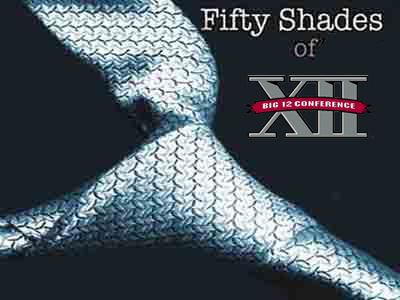 Inspired by this masterpiece from our friends at WRNL, I figured we needed a not-so-great author's version.

Hello Big 12 fans. My name is Anastasia Steele, protagonist of the sultry, cringy, clumsy, housewife moistening novel 50 Shades of Grey. One thing that the book series never delves into is that when I am not interviewing people, going to school, or totally thinking about wieners, I am really into Big 12 football. That brings me to why I am here, to give you my nervously sexual pre-season Big 12 football rankings. Mmmmm and stuff.

If I have learned anything from my relationship with Christian Grey, it is that dirty dirty sex is the only way to truly let your inner goddess loose and open yourself up to ranking the teams of the Big 12. Since this is the way to form rankings, the only way I can get this right is to hot-sex my way through the entire conference. What follows is the tale of me humping my way to the top of Big 12.

To get somewhere, you have to start at the bottom. For me, that means:

10) Kansas
It wasn't difficult to gain the attention of Kansas and get my sexual adventure through the heartland of college football revved up. Vroom vroom vulva. The second I saw Kansas, I could tell they had no defense for my advances. A team that gave up 44 points per game last year was no match for me, my provocative manners, or my sultry looks and boobs. One look and Kansas was all in... me. My inner goddess need not even awaken from her peaceful existence as within a span of two minutes Kansas had lustily tried to fulfill my Big 12 sexing desires, grunted a lot, punted, got dressed, then out of habit lined up to defend an extra point. It was time for my desire, and myself, and I guess my sexy bottom, to head south (hopefully metaphorically as well) to:

9) Texas Tech
Yummy west-Texas, dusty sex parts awaited me as I arrived in Lubbock. Before I could devour what awaited me though, I had to wade through droves of Red Raiders that could do nothing but speak of how much sexier this encounter would have been five years ago when a pirate was the ruler of this domain and would have pleasured me to ruin with his passionate air assault. Tales of this pirate moved my thighs to a constant quiver and my inner goddess was destined to explode if I couldn't be filled with a series of screens and slants at a pace of an air-raid-gasm per minute. Fortunately for me and my inner goddess, I eventually found the Texas Tech of the present and it poured itself into me. Specifically, the part of me where sex happens. It was super hot and fleshy and junk. Unfortunately, the encounter left me riddled with more herpes than a seaport brothel. Somehow the herpes were so strong they went back a generation and my mother had to go through a round of penicillin treatments. With the basement of the Big 12 having temporarily satisfied my desires, it was time to keep working up the rankings. I headed back north to attempt to conquest:

8) Iowa State
A plucky bunch, I could tell right away that these Cyclones would be entertaining. Upon entering Ames I was greeted with case-fulls of awful beer, low self-esteem, and bowls of "aw-shucks" kindness. Yes, I was appreciative... and so was my lady-boner. With names like Seneca, Steele, and The Mayor, these Cyclones were already inside of me long before they would actually be inside of me in a having sex kind of way. It wasn't long before Iowa State was on top of me, doing it. After it was over they said it was the best time they have had since last November when they won a game that didn't so much benefit them as screw up the losers season. Whatever, they seemed happy and I could now cross "make it with a bird looking thing" off my bucket list. I left Ames behind me with the soft light of the dumpster fires providing the backdrop for my journey to:

7) Baylor
My inner goddess was enchanted with the idea of an idealistic dreamer, a hopeful underdog, a sexually repressed churchy-type with an RGIII shoulder tattoo. Baylor was easy to tempt, someone that represented a Mr. Drew even kept offering me cash to stay in Waco. I didn't take the cash, but I did hold on for 90 minutes of the worst sex anyone has ever been a part of, then two minutes of fantastic, beautiful, and meaningful boning that abruptly ended with a shout of "Heisman". I was satisfied, Baylor was satisfied, and we agreed to pretend the first 90 minutes never happened. With the Bears behind me (sexually), I had to move onward and upward and inward. On to:

6) TCU
Horned Frogs. Oh wow! I need more horned things in my life... and groin area. There are very few things sexier than the new kid on the block, and these Frogs were ready to be introduced to the conference. (note: I sometimes nickname my privates "the conference"). Introduced they were. Hard. Real hard. Up and down and in and around and in other spots and.... oooh. Best of all, after it was over there was so much weed to go around. I loves my post-pork weed... sexily. Enough of this Frogging though, I needed to keep going. So up I go to:

5) Oklahoma State
Oh Cowboy. Oklahoma State had a sordid past. A history of mediocrity with sprinkles of greatness and probation mixed in, oh yes, these Cowboys were wild, and I was ready for a wild ride. I had barely arrived in town before I was saddled in and we were totally doing it cowgirl style. My inner goddess was clicking her spurs together as a Garth Brooks playlist began washing over us as if from heaven. We finished and I was covered in a mixture of sweat, hair gel, and chaw. Oh Cowboy, you were the hardest one for me to leave so far, but leave I must. For my lady divining rod was pointing back south to:

4) Texas
Where men are men, hipsters are hipsters, and 5-star QB's go to suck. Fortunately, sucking is kinda my thing if you know what I mean. Texas was cocky. Texas carried himself like someone who feels like everyone around them should just be thanking them for their presence at all times. And I was thankful... thankful and ready for a long horn. By the way, earlier when I said "sucking is kinda my thing", I meant that I do BJs. Did you get that at the time? I just realized that I left it a little vague. Anyway, Texas and I totally got it wet. It was nice. I assured him that he rocked me, he said "I know, and I understand if you want to move to a new conference". Maybe some day, but now I needed to move to the north to:

3) Kansas State
I was anxious to find the worm in the little apple, so I made my way across town, then back across, then around the circumference of the city, then hit every street in town. All of this took 9 minutes. But it was worth it because I found the worm in all it's purple glory and showed it where it could go. There is no way around it, the leader of the worm was old as sexy dirt and the worms quarterback was the most all-around talented performer I would see in my entire journey. The sexing was a balanced attack that kept me on my heels and had me squealing like it was the 90's. I left the encounter with massive respect for these Wildcats and my inner goddess had learned how to knit from the old coach. A skill learned and an ecocat banged, I packed up and headed back south to:

2) Oklahoma
This visit was a surprise as a few months ago I was sure the Sooners would be my last vagquest, but some unsexy guys had to leave the team and now I don't know what to make of them... but I do know that I will make it with them. In my flirting with these Sooners I was struck at how torn they are on their sexy-but-taken quarterback. I still do not know if they love or hate him, but I do know that they either love or hate him. There is no middle ground with the Landry. Soon though, the Sooners made their way to my middle ground. I moaned, ya know, like a sex moan, I screamed, I was ridiculed by fans for actually being in college, I enjoyed some paddling and two tiny horses, and I finally finished with a yelp of delight that didn't come from my mouth. Thankfully I caught the Sooners on their home turf so I got a decent performance out of them. I could see the finish line, so i turned east and started out toward:

1) West Virginia
Weeks later I arrived at my destination. A place where the red bull flows like a river and the only thing burning hotter than my lust were the couches. I could tell right away that everyone here was absolutely insane. It was moisteningly sexy and of course my inner goddess was totally pumped as there was no defense to be found. We did it in a casino hotel room and I have to admit that even I was pretty weirded out by the ever present bearded smile on the face of the Mountaineer. The aerial assault won me over pretty quickly though and I was moved by the force of the best team in the Big 12. My most moved body part, probably my lady bits, but the next most moved was the beard I instantly grew upon orgasm. I am a mountain mama. Take me home.