The Contenders For The Big 12 Crown And Their Flaws

Share All sharing options for: The Contenders For The Big 12 Crown And Their Flaws

Less than one week away, ladies and gentlemen. College football starts again. And in the Big 12, the parity at the top of the conference is stronger than I have ever seen it. Several teams can make very valid arguments for being the favorite to win the conference this year although it would seem that most of the national talking heads have it being a two way race between OU and West Virginia.

Idiots. All of them. Especially Kirk Herbstreit. The guy knows more about wearing his son's shorts in a deodorant commercial than he does about college football. 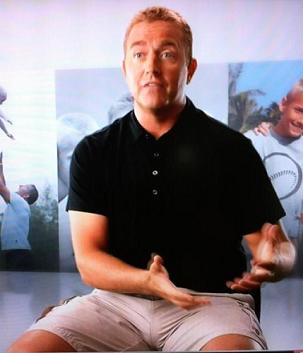 And while I can blow smoke up the collective asses of the five teams I think have a good chance of winning the championship, I think we all know that's really not our style here at CRFF. So instead, I will be breaking down the flaws of the contenders starting with the consensus favorite:

This one was actually pretty easy. Tell me which positions on the OU roster that will be better this year than they were last year. I can honestly think of only one: the corners. At every other position on the field (offense and defense), OU looks to either stay the same or is replacing players with ones of less talent. To me, that is not a recipe for a championship team. With a starting running back coming back from a season ending injury, an offensive line that lost two starters during the offseason, a wide receiver core filled with inexperience, immaturity, and attitude problems, and a quarterback that is known to be inconsistent, I don't see an offense running on all cylinders. And with a defense that lost its best talent to the NFL and a secondary that let Texas Tech (in Norman, no less) and Baylor throw the ball all over them, I don't see that side of the ball being solid either. Simply put, OU looked better on paper last year than this year and that team finished 9-3.

The rest of the contenders after the jump.

"Hey! Remember what they did to Clemson in the Orange Bowl?!" seems to be the reasoning for so many picking West Virginia so high in the Big 12. Well, I've got some other games to point out. How about losses to Syracuse and Louisville? How about barely beating Maryland, Pittsburgh, and South Florida by a collective total of ten points? It would seem that a lot of the talking heads have extremely short term memories. Not to mention West Virginia doesn't exactly have a great defense. My guess is that West Virginia will somewhat mirror Baylor's season last year. They will have some quality wins but well coached and disciplined teams will take advantage of their defensive weaknesses and one dimensional offense. And with a much more rugged conference schedule than last year, West Virginia will definitely feel the bumps and bruises accumulate throughout the season.

Let's just get down to it. Quarterback play. When Mack Brown's assessment of the QB position is "It is what it is" you know there is a problem. Texas plans on playing both David Ash and Case McCoy and the results of both will be interchangeably awful. There is no doubt that Texas is going to try to pound the rock. They have a stable of running backs that will help accomplish that goal. Still, a one dimensional offense will only take you so far. At a certain point, defenses will make the QB throw the ball and that is where the Longhorns will be exposed. On the other side of the ball, Texas returns a defense that was only second last season behind Oklahoma State in points allowed in conference games. And while the Longhorns have some great athletes (especially in the secondary), there are times when defensive coordinator Manny Diaz can be overly aggressive with his playcalling (2011 games versus OU, OSU, and Baylor come to mind). Similar playcalling this year could possibly get Texas in trouble against teams with solid offensive lines.

Quite possibly the most underrated team in the nation. There is no doubt that Bill Snyder knows how to coach. To win ten regular season games with the talent that was on that team last year was ridiculous. Now the question becomes "Can he take them to the next level this year?". For some reason, most think no due to the fact that they won so many close games in 2011. That those games were "lucky wins." While I don't personally agree with that theory, I do believe that there will be games where the K-State squad will find itself outmatched by superior athletes at most positions in the upcoming year. If these opposing teams have coaches that put together a good gameplan I don't think the Wildcats will have the talent to overcome their opponent.

Hey, I'm not a complete homer. Every contender has its flaws and the Cowboys certainly are no exception. The two most glaring are the losses of Brandon Weeden and Justin Blackmon. First off, I don't think the loss of Blackmon will be as big of a loss as some would try to make it seem. OSU will find another go-to receiver as they always do (Rashaun Woods to D'Jaun Woods to Adarius Bowman to Dez Bryant to Justin Blackmon to...). The loss of Weeden will hurt. That much cannot be denied. Especially when replacing him with a true freshman who has never taken one snap in a college game. However, that isn't the biggest potential flaw in my opinion. Last year, OSU had trouble against teams that had strong running attacks (Texas, K-State, Iowa State, Stanford). With all three starting linebackers returning, the added experience will help in run support but to what degree is still questionable. Another big concern is depth at corner. Brodrick Brown and Justin Gilbert are two of the best corners in the nation. But behind them waits two guys coming back from serious injuries (who still aren't game ready), two redshirt freshmen, and two true freshmen. When Brown or Gilbert need a breather, the edges of the field will become extremely vulnerable. And if one of them is to sustain a serious injury, the secondary will take a huge hit in a conference that is extremely pass happy.