I'm back bitches, and ready to start another season. Where had I gone? Working, I graduated last December and joined the workforce like a responsible adult. And it sucked, so I quit my job, found another student loan, and am going for my graduate degree. What does that mean for all of you? Well for one, I'll be posting a hell of a lot more, and for two, Picks from Joes will continue for a 3rd season (and at the rate I go to school, a 4th, 5th, 6th, and 7th).

So then, what have we missed? Well, Michael Bowie is gone, and that sucks, those team rules are such a bastard. Why am I not worried? Two words: Joe Wickline. As long as Wick is coaching the O-line, they could plug me in there and I wouldn't be worried (well, actually I'd be terrified, I haven't played football drunk since high school, and even then I wasn't very good).

What else do we have? The Wes Lunt era has officially begun, and from what I'm hearing we're fine at quarterback. Kid has an arm and a disposition like Weeden, and what is probably the best run game in the conference to support him. We also have a very favorable schedule early on, giving Lunt some time to get his feet under him. I'm looking at a 6-0 start to the season, and being 9-1 going into Bedlam. I'll go more into depth about Lunt and the offense in the season previews later in the week, but for now, get your boners thinking about another great season.

While we're talking about quarterbacks, I ran into Gundy this summer while at a conference for my job. He spent his vacation on the shores- 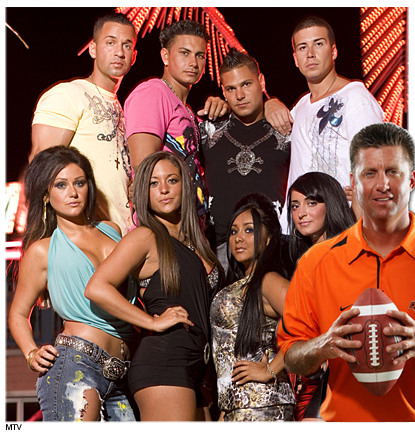 He may have the best tan, and the definitely has the best hair. I can't confirm, but I heard his Jersey name is Mikey G. Unit.

Shit, what else we got? Cowboy commit Luke Del Rio will be on ESPN's Elite 11. We are going to be stacked at qb for a few years, I think (fuck that, I'm sure). It's awesome so many of our recruits are finding their way onto ESPN, nothing like exposure to give me wood.

Anything else? I guess an update on our summer's, and perhaps an explanation why the content, has been, um, so "selective" (good word). Sam has been busy trying to invent a cure for AIDS (I told him barebacking Philipeno hookers was a terrible idea), and he's made some progress I hear. Cincy is currently on the run from the Payne County Sheriffs Office (I told him she wasn't 18- and she looked like Roseanne). Royal moved to Syria for cheap living and underage hookers, but hasn't had internet in several weeks. Yachoff has been deported back to mother Russia for making "unpatriotic statements", and probably won't escape the goulag before the first football game. As for me, I've been working while slowly succumbing to my various addictions.

Really, all we can do is say sorry we kinda sucked this summer, and beg your forgiveness. And post this NSFW link.