Don't Go Back to Tucson: A Look Back On OSU's Series With Arizona

Share All sharing options for: Don't Go Back to Tucson: A Look Back On OSU's Series With Arizona

Oklahoma State and Arizona hadn't met on the gridiron since 1942 when they were matched in San Antonio for the 2010 Alamo Bowl. OSU had added a future home and away series with the U of A in 2010 before the Alamo Bowl was picked, so it seemed a happy coincidence that our last game of 2010 would serve as a guidebook to the second game of our vaunted 2011 season. Beating the Wildcats by 26 in Texas, we beat them again by 23 points in Stilwater nine months later and it seemed as if we had the answer for Arizona, once and for always. We were wrong. After the jump is a look back at all three Arizona games over the last 21 months: 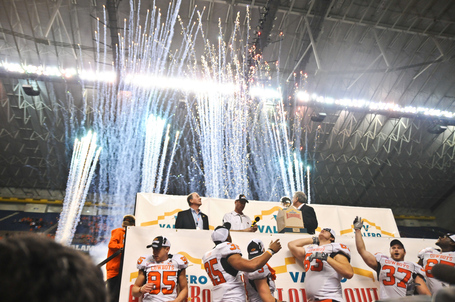 Summary: The offensive firepower that had defined the new era in Cowboy football was on full display on this late December evening. Arizona also moved the ball around accumulating more total yards than OSU, but was stymied by an inability to put it in her the endzone. Six redzone attempts in the first half produced Arizona's lone touchdown of the night as Nick Foles threw three interceptions. The game was a demonstration of how good OSU would become the next season, and how far Arizona had fallen since being ranked 13th five games before.

Highlight: Justin Blackmon, of whom many OSU fans feared might be leaving after this game, added his 12th consecutive game of over 100 yards passing and two touchdowns. Blackmon took one TD run for a extended tour of the goal line that drew the ire of everyone not wearing orange. 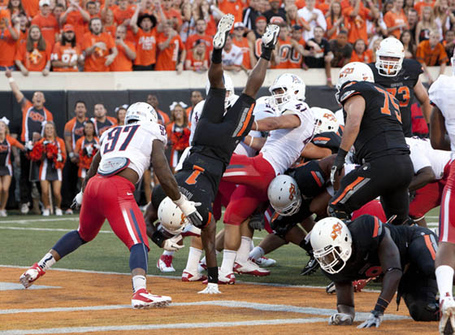 Summary: Showing why he will be thought of as the best QB to don an Oklahoma State jersey for a long time to come, Brandon Weeden completed a psychopathic 42 of 53 passes, mostly to Justin Blackmon who had 128 receiving yards. Arizona and QB Nick Foles were once again competitive in the yardage department, but not so much in the scoring department. OSU wins by having one of the best quarterback/receiver performances in school history, a performance that was only prologue to the tremendous season ahead,

Highlight: Cowboy punter Quinn Sharp runs 23 yards on a fake punt that takes the wind out of Arizona's sails and sets up OSU's 34-7 fourth quarter lead. Equally awesome is the fact that head coach Mike Stoops is jobless by that October after leading Arizona to a 1-5 start. 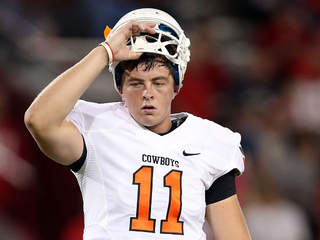 Summary: After the redlining 84-0 game that was Savannah State, OSU fans felt ready to see the unveiling of the 2012 model offense. And for ten minutes in the first quarter, it miraculously seemed as if the 2012 model had all the highly tuned engine and stylish European detailing of the 2011 Cowboy model. Unfortunately however, the second quarter reveled the highly tuned engine had sugar in its gas tank, and the "stylish" European detailing was similar to what you would find with a 1978 Fiat Strada. Jumping to a 14-0 lead behind a surprisingly cogent Wes Lunt, OSU was outscored 30-0 over the next two quarters under a barrage of penalties that at first seemed cute but quickly got ridonculous. The penalties were given out to OSU as if Sheriff Joe Arpaio were a guest official; It cannot be confirmed at presstime, but Mike Gundy may have been court-ordered to wear pink underwear until T. Boone-One crossed safely out of Arizona airspace early Sunday morning. The Cowboy playcalling was also cute, but the kind of cute that is so fucking cute you could just fucking punch it if it wasn't so pathetic already. End-arounds to nowhere. A flea-flicker that took 12 minutes to throw into three-deep coverage. Our new "Walsh-ing Machine" play was good for laughs and negative 1 yards. Our lone defensive superpower, take-a-ways, had been taken from us by Arizona and we were slapped around with it four times. OSU was quick to start, but with record setting penalties and a bad gameplan the formerly ranked Cowboys were humiliated in the desert by three scores.

Highlights: Wes Lunt was the question mark of this game, and shocked fans by being, until late, OSU's most consistant players. Leading two unanswered Tracy Moore touchdowns with Brandon Weeden speed, it looked as though OSU had yet another twenty point victory over U of A in the cards. But that was not going to happen with 15 penalties for 167 yards. While good in the first quarter, Lunt got a little more sloppy when the team really needed to start filling the gap, throwing balls that were too high a number of times. Then the picks came. To Lunt's credit, the constant penalties for offensive holding hurt his chances considerably on drives, and only one interception was wholly his fault. As a first impression, Lunt looks like he can mature quickly and has a good head about him. He'll bounce back and be better for it. Sometimes it's good to have your ass handed to you to remind you that nothing is given to you in college football.