When it comes to backup QB's, great news often leads to bad news. In relief of the injured prodigy, J.W. Walsh performed admirably in the ULL game turning in one of the best statistical performances by a quarterback in Oklahoma State history. Awesome. Here is the path most of our minds traveled after that game:

That is GREAT news.

Hey, the offense looked great when he played.

Ya know, maybe he should be on the field more even when Lunt is back.

And so begins a QB controversy (Texas performance pending).

The good thing for Oklahoma State fans is that this is a good QB controversy. It is a controversy that the nation is interested in, and that is rooted in questions like, "Which of these two uniquely skilled guys is better for the team?" instead of "Which of these OU/Texas reject recruits are physically able to heave the ball more than 15 yards?". We haven't always been so lucky.

Here is a look at some of the notable QB controversies over the past 15 years in Stillwater (post dark ages), ranked from least to most pathetic. Each one is assigned a controversy score which is an arbitrary number that attempts to take into account how undesirable the QB's in question would be to a decent team and in turn how embarrassing the controversy is to fans of the program. As an analogy, if you overheard a couple arguing about whether to eat at Mohogany's or Mickey Mantle's you would think that is a worthwhile argument to have, where if you heard that same couple argue about whether to eat at Taco Bell or to chew on a dead squirrel you would have a different opinion of them. Sadly we usually fall into the later category. 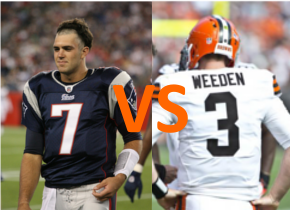 This one is recent enough where I think we all remember it. It is, to date, the least pathetic QB controversy in Oklahoma State history. When both QB's involved in the controversy end up on NFL rosters, you have yourself a non-embarrassing QB battle.
To briefly recap, Alex Cate pooed himself when he got the start in place of an injured ZRob for the Colorado game, Weeden came in for the 2nd half and brought the Cowboys back from a large deficit showcasing an arm we have never seen in Stilly, ZRob returned for the next game (Bedlam) where he was largely ineffective, and the controversy raged as to who should play in the bowl game. OK, it didn't really rage as we were too depressed about the bowl we were headed to after the Bedlam loss to care too much, but it was discussed. 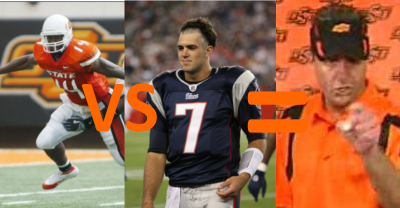 Based on only the talent of the two quarterbacks involved in this one, the controversy score would be an 8.1, but given the rant it induced, and how it ruined Reid as a QB, 0.6 points were deducted.
This controversy is now known the world over, but here goes anyway. Chronological history:
2006 - Bobby was good but erratic
Early 2007 - Bobby was the same, ZRob was winning over coaches in practices
Troy game - Zac plays, Bobby is fed chicken by his mom
Tech game - Jenni Carlson writes an article about Bobby, The Rant
Onward - ZRob is the permanent starter, takes every Stillwater female's virginity 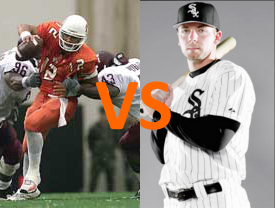 Pogi only played at Oklahoma State for 3 seasons, but somehow was in the middle of 73 quarterback controversies. He was just talented enough to be in the mix, but not enough to ever firmly plant himself into the starter role (even though he was the primary starter in 2000 and 2001). Fields somehow released the ball behind his back, arched every pass like a softball pitch, yet was one of the most effective QB's we have seen. 2001 was a terrible season, the Cowboys started the season 2-7 then lost their starting QB (Pogi) in the Baylor game. A freshman (Fields) was the backup and all he did was march into Norman and help defeat the #4 ranked Sooners with the pass that will forever be known as "the time I crapped my pants", or "Fields to Woods". Immediately after the win the 2002 QB controversy started as Pogi was going to be back for his 24th junior season. Luckily it was quelled before the season even started, Fields was the starter for the next 2 years and all was peaceful in God's Country. 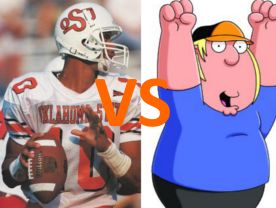 Big jump here. All the controversies before this one involved guys that could play in the NFL, MLB, or were highly touted recruits, from here down there will be none of that. Also, it is really hard to find game stats from before 2002 so most of the ones before that are based on fuzzy memory. This was the Alamo Bowl season (hence the slightly higher score than the ones below here). Chaloupkah began the season as the starter and the Oklahoma State O-line tried to provide him a pocket to pass from. This didn't work very well. Eventually Linsday started seeing some time and it was discovered that his legs and horrible-but-serviceable passing were way more effective than Chaloupka's ability to get sacked. The two split time for a while before Lindsay was finally named the full time starter who lead the Cowboys to 8-4 and their first bowl game in one million years. 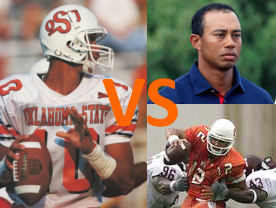 Linsday was alright for the Bob Simmons era offense which mostly consisted of, "Nathan up the middle, "Nathan off the right guard", "fans booing and wanting Fobbs in the game", "Nathan up the middle", but he wasn't that great overall and was really good at getting hit hard, falling funny, and getting injured. This brought up the inevitable QB debates when everyone saw BJ Tiger run a sub-3.0 100-yard dash, and when Pogi came in on passing downs in 2000 and Cowboy fans got their first glimpse of a spiral with a little touch on it since the late 80's. Pogi/Lindsay was the most mediocre attempt at a QB rotation that the Big 12 has possibly seen, and not shockingly, Bob Simmons was fired after these two messes of seasons. 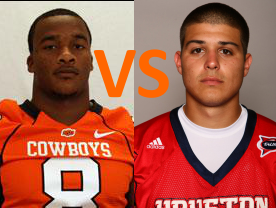 This one might not be as widespread of a QB controversy as it seemed there was more of a grumble for Pena than an outright demand, but it is the funniest one so I'm including it.
Donovan Woods was a remarkable safety, as a QB he left a lot to be desired. This was during The Hat's final year in Stillwater where he spent half the season talking to LSU, half yelling at his own reflection in the mirror, and zero time evaluating quarterback talent. Vernand Morency was the offense this season and for five out of twelve games Donovan had less than 10 passing attempts. The offense only averaged 140 yards per game through the air. This worked well getting the Cowboys to 5-0, then defenses figured out that Donovan couldn't throw the ball in a forward-ish direction with much accuracy, started stacking the box and the Pokes only won 2 games the rest of the season (the defense didn't help much, but that is another story). Many fans saw Pena come in for mop up duty in a couple of early blowouts and thought, "Hey, that guy's passes don't look like punts, maybe he should play QB to keep defenses more honest". Sadly it was never to be as Pena finished the season with only 11 attempts. 2005 gave us a glimpse as to why he stayed off the field as Pena, in the starting role, managed an 8-13 TD/INT ratio and mostly looked lost. Yes, a controversy so bad that one of the guys converts to defense and the other transfers to Houston earns this consideration as not only the worst QB controversy of the last 15 years, but as the worst QB controversy in Oklahoma State history.