O Running Game, Where Art Thou?

For the first time in Mike Gundy's tenure at Oklahoma State, the Cowboys are struggling to find a running game.

Share All sharing options for: O Running Game, Where Art Thou?

The popular perception of most fast-paced spread/air raid offenses is that they are predicated on their ability to throw the ball, but the reality is that all of the space and tempo that these offenses generate is meant to bolster the running game. When Chip Kelly was hired by the Eagles this off-season, a lot of people believed that his hiring was a result of the NFL becoming a pass happy league, but instead, Kelly has reinvigorated the reliance on the run in Philly, and the Eagles are averaging the most rushing yards per game since the 2006 Atlanta Falcons (not so coincidentally, Mike Vick was the QB of that team, too).

Make no mistake, most spread offenses with great running attacks also wind up with prolific passing attacks and quarterbacks that put up video game numbers, but that's partially a result of the inflated number of snaps these offenses have and heavily reliant on the amount of attention the defense pays to the running game. At the end of the day, almost all spread offenses operate based on box count, and all of those complex signals and funny signs on the sidelines essentially boils down to counting how many players are inside the box and how many players are outside of it and calling a play based on something as simple as addition and subtraction.

Mike Gundy's Oklahoma State teams have always excelled at running the football. While the best season in school history came about when a pure pocket passer and dominant receiver paired up in 2011, throughout most of his tenure, the focus has been on piling up yardage on the ground. In the past six years, Oklahoma State has ranked in the top 20 nationally in yards per rush attempt five times and in the top 40 in rushing yards per game five times. With the exception of Weeden's two seasons as the starter, Gundy's teams have always ran the ball more than they've thrown it, and sometimes the gap as been as many as 200 more rushing attempts than passing attempts.

Here's a year-by-year look at those numbers dating back to 2007.

As you can see, one of those seasons is not like the other. Only twice in Gundy's tenure has his team failed to average over five yards per carry (2005 and 2009). Right now the Cowboys are averaging just 4.1 yards per carry, which would be the second worst average in the past nine seasons, and their rushing yards per game average has dropped from elite/great to average in a hurry.

What's worse is that OSU's rushing offense is failing them early in series, which is what is leading to those unfavorable third-and-longs. The Cowboys are averaging 3.8 yards per carry on first down this season and 3.69 yards per carry on second down.

The lack of a dynamic playmaker in the backfield is one of the reasons (we'll get to a couple more in a second). Here's a look at the Pokes' primary backs dating back to 2007 and how many all-purpose yards they averaged per play and per game.

Yet again, Oklahoma State's 2013 representative leaves a lot to be desired in comparison to his predecessors. Smith has not had the easiest go of things this year because of his offensive line and the numbers game that the Cowboys are almost losing inside the box, so he's far from the only reason for the struggles in the running game, but he does lack the explosiveness and the dynamic ability of someone like Hunter or Randle.

It's worth noting that all of these numbers for this season are based on a five game sample size, but this also means that games against cupcake opponents like Lamar and UTSA carry additional weight, and yet the numbers are still lacking. It's also nice to examine these numbers near the mid-point in the season so we can evaluate it against later in the year.

I loved Smith in the role he had played for the past three seasons: the downhill runner that changed up the pace while elusive and versatile weapons like Randle or Hunter carried the primary load. As a touchdown thief and supersub, Smith was able to put up some pretty good/great per play numbers. But as a the starter and the primary back on a team that's struggling to open up those same holes as in year's past and with a quarterback that defenses are disregarding in order to load the line of scrimmage, he's not someone we should be expecting to replicate what others have done in the past (oddly enough, I do think Smith could be a useful NFL player in some capacity). 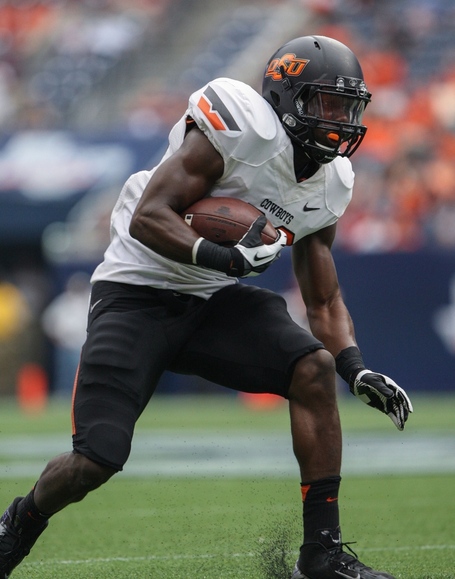 It may even be time to consider shifting the role of primary back to Desmond Roland. While Smith's struggles aren't totally on him, he's had all of 131 yards on 48 carries (2.7 yards per carry) since the Mississippi State game, including 15 carries for three feet against West Virginia and 12 carries for 34 yards against UTSA, and until the offensive line or Walsh improves, his life is not going to be any easier. Roland has shown a better ability to escape the backfield when placed in less than ideal situations and he's a more effective pass catcher.

That said, no running back in the program is going to come close to matching the level of production we've seen in the past if something doesn't change with the offensive line and quarterback, which are two more problems we haven't had to endure a lot of during Gundy's time here.

The offensive line conundrum is the most difficult to understand. It may or may not be correctable. I'm not an expert on protection schemes or anything like that, but I do know that the amount of penetration and missed assignments and the lack of push is very different than in years past. Joe Wickline has been here throughout Gundy's entire stay and he's gained the respect of many for his tremendous work. I'm not sure if his message has yet to stick with this particular group or if he simply doesn't have the talent year, but it seems like things have been going downhill for the O-line ever since Devin Davis tore his ACL in training camp.

Of course, things would be a little bit easier for Wickline's troops if defenses weren't completely disregarding Walsh's passing abilities and loading the box on a large number of OSU's snaps.

This, I think, is the best argument for those who feel like a QB change is needed (I may or may not be in this group). The perception of Walsh is that he struggles to throw the ball and teams have been playing him like so, daring him to beat them deep. Whether or not Walsh can do that consistently remains to be seen, but I'm not sure that Walsh making one of those throws (as he did to Stewart against Kansas State) is going to change much. Forcing Walsh to beat you vertically is still a lesser evil than putting less pressure on the Cowboys running game.

It's also worth noting that Walsh's dual-threat ability has not been on display as much as it was in the season opener. Ever since Walsh went for 125 yards on the ground against a Mississippi State team that termed the diamond formation that Walsh ran out of a "novelty," Walsh has run for just 140 yards on 39 attempts in the past four games, picking up just 3.6 yards per carry (for reference, Clint Chelf averaged 5.2 yards per carry last year on 31 attempts).

There a few factors that have led to Oklahoma State's poor showing on the ground this season. Not having a potent threat like Randle or Hunter may not be fixable this season (unless Roland is the answer; I'd also like to see some more of Rennie Childs) and the offensive line may simply be having a down year, so the one thing that the Cowboys can do to improve the output of their running backs is to get better play from the quarterback position.

Having the most important player on the field play better to help the team seems like a novel idea, I know, but a lot of the run plays/run-pass options are dead the second they are signaled in because of how many defenders the opponent is committing to the run. Right now the Cowboys are seeing a lot of single high safety (and even some cover-O's) with man coverage on the outside. Throws against man coverage are tougher to make then the ones against zone coverage where the throwing windows are very clearly laid out, and the offensive line isn't always giving Walsh a clean pocket.

Whether or not the perception matches reality, Chelf is more respected as a passer and would likely prompt different coverages and more double high safety, but it would take something truly catastrophic for the senior signal caller to get the keys to the offense back.

That puts the onus on Walsh to start giving the defense some anxiety about his arm (rather than giving us anxiety about his arm), because until the Pokes' passing attack is something to be feared, with this particular group of linemen and running backs, that well-oiled offensive machine we've become used to may not be making an appearance in 2013.