Oklahoma State's offense got poor play from everybody on the field against West Virginia.

Share All sharing options for: Upon Further Review: Issues Everywhere On Offense

Going back and watching the West Virginia game again was probably hazardous to my health, but seeing a Mike Gundy team struggle so much to find a rhythm on offense made an investigation necessary. Criticism for the Pokes' poor offensive performance has been distributed around much more efficiently than the ball was on Saturday afternoon, and the most troubling thing about it is that all of the flak, to some extent, is warranted. Whether it's Yurcich, J.W. Walsh, the offensive line, the running backs or the wide receivers, everybody had a hand in Oklahoma State's letdown loss in Morgantown, and having several small problems is often times worse than having a single major flaw.

Let's start with Walsh, since the quarterback is always the most polarizing figure on any football team. Walsh confirmed suspicions about his arm strength and accuracy against West Virginia when he missed several game changing throws by either floating the ball or tossing a bounce pass. I wondered why Yurcich didn't give Walsh the chance to throw the ball down the field a lot against Lamar, but it appears as if the reason is as simple as Walsh not having the arm talent to get the ball down the field anywhere other than up the seams. Throws to the wide side of the field require additional zip and accuracy, and Walsh has yet to show he's capable of making these throws.

Here's an example of Walsh missing a wide open Josh Stewart on an out route on third and long. Now, one of the main goals of this offensive system is to never have your quarterback in these situations, but with West Virginia rendering OSU's running game non-existent, third-and-8 and third-and-10 was a common sight on Saturday. While it's a less than ideal circumstance for a QB that struggles throwing the ball (that was weird to type), this is a throw that has to be made.

West Virginia, as they did all game long, dialed up pressure on this down and distance, but the protection is actually good in this instance, and Walsh has a clean pocket and time to step into a strong throw. Instead, it looks like he's skipping rocks on a lake.

Here's something I noticed on a third-and-8 in the first quarter (notice the trend?). 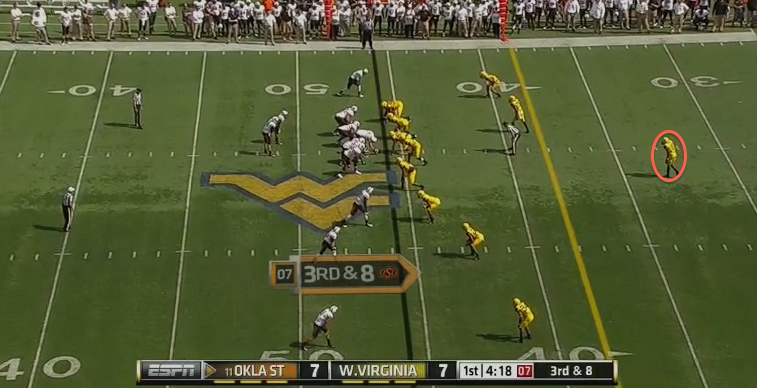 West Virginia is showing blitz and a single high safety, indicating man coverage on the outside. Outside of the down and distance, this is generally a situation that the spread offense loves because it's an even numbers matchup on the outside and all they need for a big play to happen is for one of their playmakers to find space quickly. The hot route vs the blitz is David Glidden in the wide slot and he's going to run a quick slant. I'm not sure if this was the only read on the play for Walsh and he was instructed to only make that throw, but an interesting option opens up as soon as the play develops.

West Virginia's two slot corners get mixed up as Tracy Moore (I think) runs what amounts to a pick route and both corners end up shadowing Glidden while Moore is about to become wide open on the corner route. Again, I'm not sure if Walsh's only real option on the play was Glidden, but if he had read the field for one beat longer, he would have had a shot a big play to the outside. Of course, who knows if a corner route from the far hash is a throw in his repertoire right now.

Yurcich has already been absolved of some of the blame for the playcalling as more folks are realizing that one "play" for the Cowboys has several options and that a handoff to the running back isn't always decided by Yurcich or even Walsh, but instead of how "key" players on the defense react at the snap.

Below is a packaged play that the Cowboys run all of the time. The end result was a handoff to Jeremy Smith that went for negative yards (we'll get to the offensive line in a second), so the natural reaction is to question why OSU ran the ball. Well, it all comes down to the backside defensive end on this play, as Walsh is reading his reaction. If the DE crashes on the handoff, Walsh pulls the ball back and runs and if the DE sits down (illustrated here), Walsh can hand it off to Smith. However, there is one more option here: the play-action pass.

The thing that makes me believe this particular play was more than a straight run read-option is that the receivers seem to run routes rather than firing off and blocking right away (although they were horrendous at this on Saturday). The wide receiver split wide right (Seales) immediately jumps back as if he was anticipating a screen pass while the three receivers on the left seem to break into routes before they turn back to block.

I'm not entirely sure what Walsh's next coaching point is on pulling the ball back to make a pass, but knowing the situation and the success of the line on this day, I would like for Walsh to explore the passing options out of these packaged plays. With the DE ready to burst at him, they'd have to be quick hitters, but those are the type of rhythm throws he desperately needs right now. 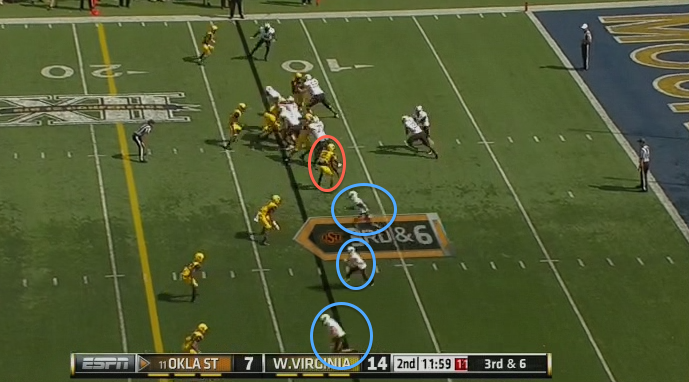 Instead, Walsh makes the handoff, which isn't the "wrong" decision, but if there are pass concepts out of this playcall, I'd like to see them used more often, particularly if our offense line continues to surrender ground.

And there's the much ballyhooed fade throw on second-and-goal on what could have proven as a game winning drive for the Cowboys had they been able to punch the ball in from one yard out. We've now learned that the play was an inside zone run with the option for a fade built it. So, the one time that everybody thought that the Cowboys should have called a run, they actually did, but Walsh had the power to check out of it to a fade to Tracy Moore (the fact that Walsh was given this option was made funny when Gary Kubiak said Matt Schaub did not have the authority to audible out of that laughable bootleg play on Sunday afternoon).

Here's what Walsh saw before the snap. 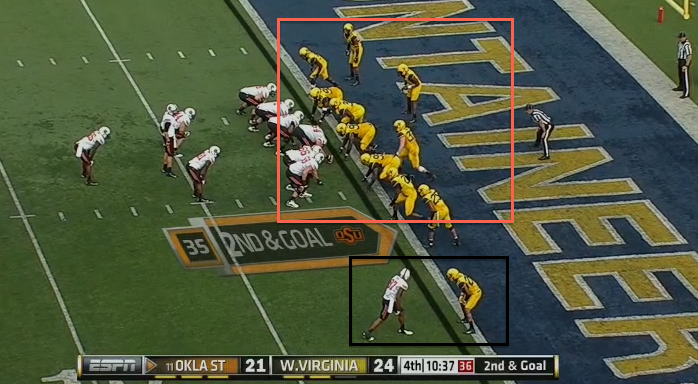 Each team has 10 players in the box, so Walsh correctly diagnoses that the one-on-one matchup on the outside is suitable for the fade route. That said: 1) It's one-yard, 2) Walsh doesn't have the touch to throw this route consistently, 3) Why not have Marcell Ateman in instead of Moore in all fade situations (I imagine this is Yurich's call)?

Granted, the offensive line could not be counted on to hold their ground in order for the running back to get a one-yard gain Saturday (boy is that sad), so taking a chance through the air at the goalline isn't the worst idea on second down. However, if I'm throwing it here, I'm doing so by spreading out the defense and giving Walsh several options rather than forcing him to make a throw that some NFL QBs struggle to make consistently. If it's Dez Bryant or Justin Blackmon on the outside, then fine, I could throw it up there, but with a neutral matchup outside, I hate the fade call only slightly less than the fact that Walsh had the power to make that decision.

I'll start by saying that I don't think that Jeremy Smith is a tremendous option as an everydown back because I don't think he's all that effective of an edge rusher, and a lot of this read option stuff is going to require him to bounce it outside. He is certainly someone who can earn a tough yard if presented a lane, but I'm not sure why Desmond Roland hasn't been getting more touches. He's more explosive and can make quicker cuts that give him a better chance of getting out of predicaments like this one.

I could have pulled several clips of the line failing to get any push and actually surrendering space at the snap, but look how the wide receivers get blown by as the West Virginia defensive backs shoot into the backfield. That's awful technique and poor effort and goes to show that Jeremy Smith's struggles in that game were not all on him. 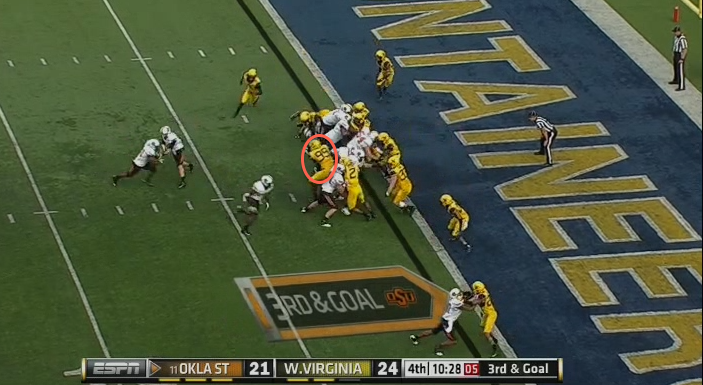 On the third and goal call, Smith may have a lane to the endzone on the outside on this stretch play as the wide receiver does a good job taking care of his man and as the lead blocker out of the backfield shoots out at the SAM linebacker, but Daniel Koenig gets beat on the inside and the instant penetration blows up the play.

The only things that went right on Saturday involved either Josh Stewart getting the ball or seam routes.

Oklahoma State's first big play of the game came on a tunnel screen, or, as I like to call it, "The Michael Crabtree screen," that has Stewart drag behind the line of scrimmage from his off alignment before catching the ball and escaping up the field. Getting Stewart the ball in space is when this offense is at its best. OSU went back to this play later on in the game, but Walsh's pass was batted down at the line (this seems like it may be becoming an issue).

Here's another example of finding Stewart in areas where he can make plays. 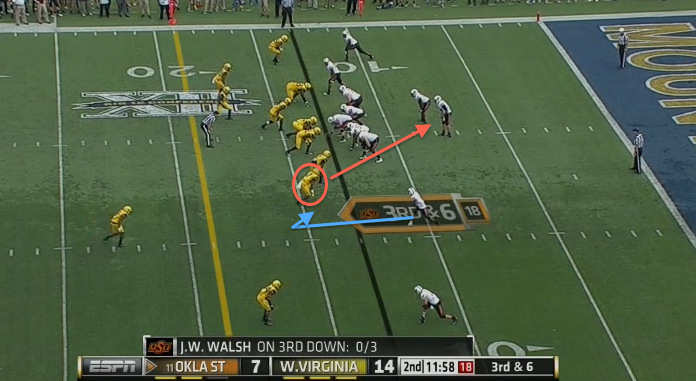 On one of the few third downs that the Cowboys converted, they go to one of the most common spread concepts in the playbook. They have a double post look from the two right receivers a go route from the wide left receiver and a stick/hitch route from Stewart in the slot. West Virginia is bringing pressure again on this play and they show early that it's coming from the slot corner. This is going to give Stewart a clean release and enough space between he and the safety to make a move and get up the field.

And then there's the seam routes. Even in the UTSA game, this has been the area of the field where Walsh has been most comfortable and most effective attacking. 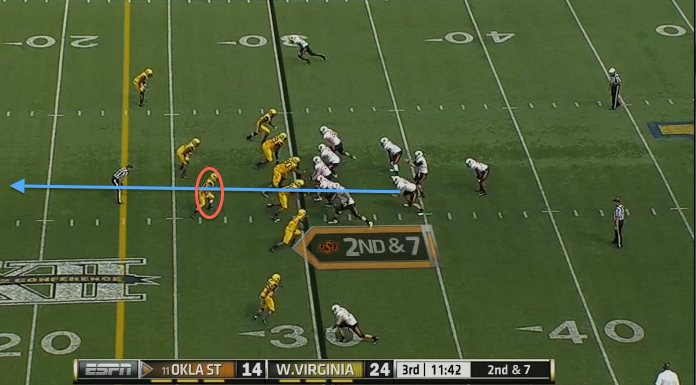 Here the Cowboys go with a play-action pass out of the diamond formation, with the dummy action stretching right while Jeremy Seaton streaks up the left seam. 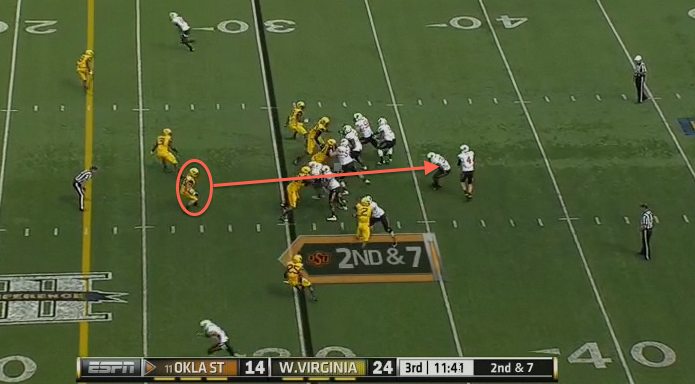 West Virginia linebacker Jared Barber steps towards the playfake initially and once he reads pass, never gains any depth in his drop, allowing Seaton to get behind the defense and walk into the endzone.

Were my eyes poked?

Sadly, no. This was a very disappointing game in which every facet of the offense failed to some extent. These are mostly correctable issues and West Virginia has a solid defense, but this offense seems like it's going to be a large step down from the well-oiled machine we had gotten used to.