For those of you clamoring for Chelf, after reviewing the tape, I will respond with an emphatic "NO."

So everyone got excited when Choo Choo got another shot. I was excited to see what he could do, not that Walsh wasn't doing.

You see, with just a little effort and the DVR, it was easy to determine that Walsh got yanked for one mistake.

The interception in the end zone.

And I don't want to hear about dink and dunk bullshit. The ball got thrown down the field. Plenty.

The first drive of the game demonstrated who was ready to make plays and that Tracy Moore has a case of the "Blake Jackson" hands.

After 4 straight completions to Josh Stewart, Walsh rolled left, set up, and heaved a PERFECT bomb 56 yards in the air to Moore. This is what we got...

Moore horribly short arms this catch on what would have been a TD. Everyone who wants to bitch about Walsh's arm can shut it right now. Walsh is not the problem.

TCU blew up the next play, a screen pass to Smith. On 3rd and 10, Walsh was hit as he released the ball, resulting in an errant throw and interception... 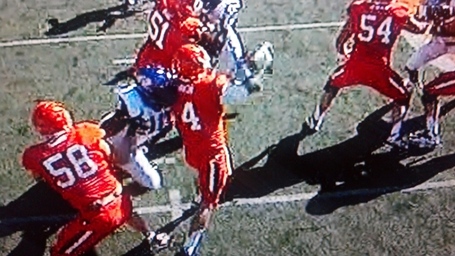 On the next drive, Walsh and Seales aren't on the same page. J.W. throws perfectly into the gap in the zone, but Seales continues to slide inside, resulting in a ball thrown behind the receiver. I'm putting that one on Seales as Walsh threw the ball before the WR made his cut.

The next play, Walsh throws perfectly behind Stewart, who adjusts and makes the catch, continuing for a 28 yd gain. On the next play, J.W. scrambles and throws a perfect pass to Stewart who makes a tremendous one handed catch...

Unfortunately, this is negated by a penalty on the offensive line. An incompletion deep left to Shepherd, who fell down in coverage, and a delay of game penalty (HOW THE HELL DOES THIS EVER HAPPEN WITH THIS OFFENSE???) put OSU in a 3 & 22. Walsh and Steward hooked up again for 14 yards.

After another fruitless TCU possession, this happened...

With one minute left in the first quarter. Walsh would complete his first pass to someone OTHER than Stewart, finding Tracy Moore for 9 yards.

I could keep cataloging his throws, but I don't need to. The only poor decision he made was the interception in the end zone. The only really poor throw he made was a deep in that was behind Seales, but on the very next throw he threw another PERFECT ball to Steward down the right sideline for a big gain. Overall Walsh generally threw the ball where he needed to in order for his receivers to make a play. He ended up 9-18 with a WAY better QBR than Chelf (56.4 vs 28.0)

And of course, on his very first pass, he throws and interception. Not on him, as he was also hit as he threw... 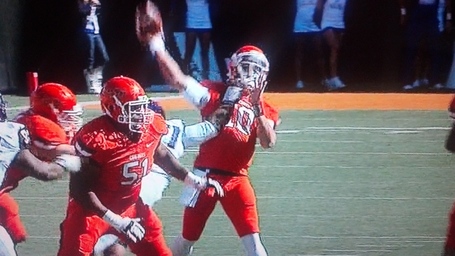 While Chelf gets a pass on this one, the rest of his day was not so hot. He managed just 10-25, and only twice did he complete 2 passes in a row. He also was the victim of drops, as Tracy Moore and Seales couldn't hold on to decent throws. But he was often WAY off, mostly overthrowing his targets. It may look prettier, but Chelf is definitely NOT more effective than Walsh at running this offense. He did have 3 big completions...40+ yards to T. Moore...30 yards to C. Moore, who made a great catch in coverage...and this little nugget from our hero of the moment, Rennie Childs...

The Diamond formation popped out of Punxsutawney Phil's den, scored a TD, then saw it's shadow and would only come out once the rest of the game. That second appearance did not go well...

If we look at the formation pre-snap, I am totally amazed that Chelf wouldn't check to a run to the right given TCU's defensive formation. Instead, OSU ran right into the strong side of the defense. I REALLY don't understand this, as I was under the impression that much of what goes on is all about the read at the line of scrimmage. 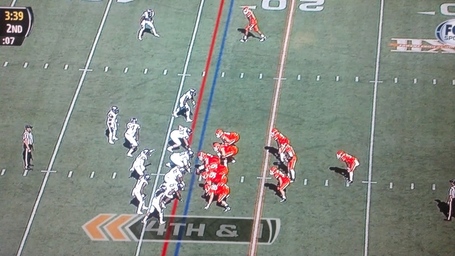 All in all, a pretty strong performance from the defense, allbeit expected, as TCU's offense is horrendous. I will take issue with some tackling, and why the heck did Spencer call for the all out Psycho blitz on TCU's only touchdown? Yes, Barnett had a major whiff on the missed tackle, but still, if OSU's defense has been able to stop them out of regular formations, why expose them to exactly what happened? One missed opportunity and there is no help.

How about Rennie Childs? For the first time all season (probably due to Smith getting dinged up) we get to see a RB with VISION. He is definitely more of a cutter than Roland or Smith, and exhibited the most valuable of running back traits...the ability to get past first contact, which is what results in chunks of yards. Just look at the aforementioned TCU TD for proof of how valuable that is.

If you go to the last drive, which was only 4 plays, you get a handoff to Childs, a zone read by Chelf, the TD run by Childs, and the ghost of TD Bryant summoned by Charlie Moore and Josh Stewart...

Let's have a look at that in slow motion...

For me, this game boiled down to Stewart and Childs making plays, the defense doing what it should have done, and a hasty QB decision made by Gundy that in the end had little to do with the outcome.

The good things that come out of this?

How in the world did TCU score 17 on OU?
Hopefully Gundy stays with Walsh and Childs, and the Cowboys proceed to Ames and take care of business against an offense similar to the Horned Frogs and a defense that is not as stingy.
A win is a win. OSU is 5-1, and still controls it's own destiny in the conference race. Let's hope the offense has found a spark.
GO POKES!!!