Once upon a time I bought a new car. It was shiny and new and had lots of bells and whistles. It only took one drive to work before I wondered if I had made the right choice. I have 30 days to return this thing right? Shoot...

It's natural for competitive people to wonder how much better they can be. "I did good, but I can do better" "If do one more set of box jumps, I'll have that extra edge next game." They downplay their successes and focus on what they can improve on.

Myth #1: The Grass is Always Greener on the Other Side

1a) Chelf vs Walsh. Sigh. Are we really here again? Okay, let me paint a picture for you.

Just envision the following scenario. The first stringer' is doing okay. He's not going great by any means yet no one is really sure where the problem lies. Is it really him, the QB? Maybe it's the Coaches? While some may argue over the exact cause others keep hearing great things about the second stringer'. Coaches and player seem to like him enough, and his past resume isn't bad. Maybe in just the right moment, we'll throw in the the new guy and he will be able to excel, nay, surpass all before him.

Then, in the middle of a game, we watch a few errant passes; one into the endzone for an INT. Things are just not looking good. Frustration is peaking. You know what, I'm down, let's do the damn thing already. Throw in the second guy. It can't get any worse, right? This New Awesomesauce guy has to be better than what is already out here, its just a fact. This guy we're used to is awful, so the new guy must be better.

Wait. QBR says "That Guy We're Used To" to is better? Oh shit - It also says neither one of them is in the top 45 this week (Okay, adjusted QBR has That guy we're used to at #24). That's not how this was supposed to turn out.

All drama aside, this says two very obvious things: Chelf was not better and no matter who you think is better, neither is that great to begin with. It is gut wrenchingly apparent that we are just picking the lessor of two evils here. It's who's the backup, not who's the starter.

Please don't get me wrong though, I'll stand behind either one of these guys. But that's the point, either one.

Just for comparison, here is the TCU game last year.

ICYMI: okc_dave had a great write up on College Football QBR and Winning Percentage.

Conclusion: Busted. Look. The grass is not greener on the other side - no matter what side you start with. Both of them need help and neither one is the answer. Consider this one busted. Please?

1b) Childs vs Smith. According to you our readers Childs wins this by a landslide. There was a time when I thought the world would sit back and just say "Man! Smith can run! Let's erect a statue in honor of those biceps!"

Sadly (and I really mean that) this is not the case. Smith is by all accounts a great guy, and could be a great change of pace back that just isn't getting the job done as the lead.

Conclusion: Confirmed. This is the second game of the year where Smith averaged below 2 yards per carry and third game where he averaged below 3 yards per carry. Childs has earned a higher spot on the depth chart against Iowa State this week, period. Let's see what happens and go from there.

Myth #2: Defenses are not scared of Walsh's arm so they play press coverages that stuff the run game. When Chelf plays they fall back and watch the entire field

Alright. I'll bite. You're telling me that if we ride the Choo Choo Train we'll have a QB that might not actually be better, but he plays so differently that defenses are forced to defend more of the field and hence opens up the running game. Great, I'm sold, let's see it in action. 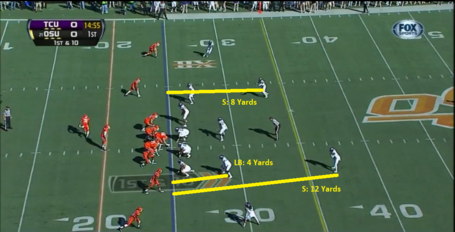 This was the first play of the game with Walsh at QB. As you can see from the pic, TCU did not play very close to the line. 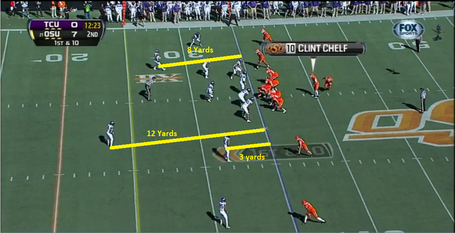 And this is the first play of the game with Chelf at QB. Same exact package by the TCU D. No difference.

Okay, that was just one play each. Let's look at the stats.

Damn it. I really did think there would be some truth in this one. 0.1 YPC is indeed something, I'll give you that, but It's just not as much as I wanted to see. (Note, This includes QB sack/rush yards since those correlate with pressure)

As we stated above, a game changer for the running game was Childs. He didn't play with Walsh earlier in the game. Let's factor out his plays and recalculate.

Conclusion: Busted. Chelf did not help the run game. Childs did. This notion that defenses are scared of Chelf's arm and therefore back off is bogus - or if it's not completely bogus it should at least be considered a non-factor.

Fun article, but I didn't find any truth I was hoping for in the myths. Oh well.