THE QUANDARY OF THE DIAMOND

They may be a girl's best friend, but Yurcich seems to have lost his in the rough.

Share All sharing options for: THE QUANDARY OF THE DIAMOND

Continuing my analysis of the Cowboys during games against "legit" Division I opponents (Miss St, WV, KState), I have decided to look at the use and production of the much loved, but seldom seen diamond formation.

So let's cut to the chase...for clarification, I'm using only snaps where the play was actually run from that formation. No shifts or motions. 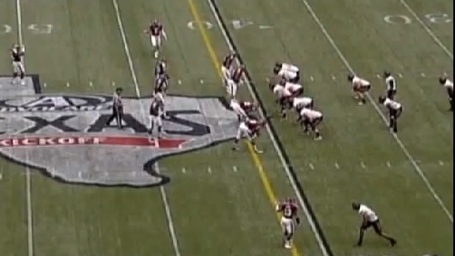 This was the Walsh 46 yd dash that woke up OSU's offense. Notice the line is heavy to the right, but the play goes left.

Here's the GIF of that play, courtesy of Steven Godfrey...

During the game, one of the announcers commented that OSU should go back to the diamond formation because it has not been stopped. 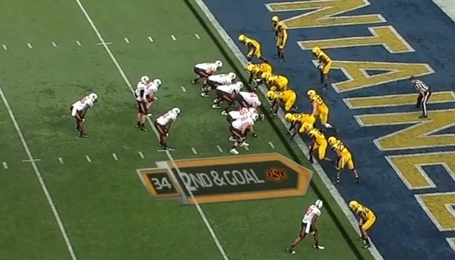 This is the infamous "check to the fade" audible that Walsh called. Notice the same formation but the opposite side of the field as the play against Mississippi State. My question here would be how many options running the ball there must be out of this set, not to mention the play action roll out pass. Walsh definitely sees the overloaded ends on both sides, but based on the DB lined up just inside the DE on the right, why not check to an inside handoff or QB sweep going left where you have the blocking advantage, and features the best part of your offensive line?

-was used 7 times (was in the formation an eighth time after the "fade" route, but motioned out of it. The announcer commented that he couldn't believe they shifted. Also couldn't believe they checked to the fade on the previous play)
-7 plays for 66 yds (9.4 yds/play)
-4 rushes for 11 yds
-2-3 passing for 55 yds and 1 TD 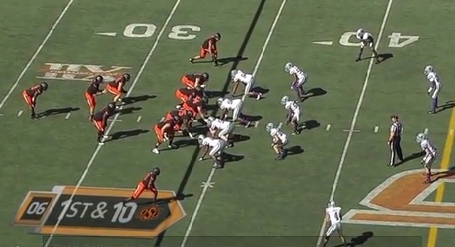 Here is a different alignment for the diamond, where the line doesn't go heavy to one side. This resulted in a handoff to Smith over left tackle for 6 yards.

The Cowboys have gone "exclusive" diamond only once, and that was the flea flicker drive in the first half against Kansas State.

When OSU has gone to the formation 3 or more plays in a row, it has not been stopped and has resulted in 3 TD's.

Seems pretty clear to me. I'll admit that OSU did just fine on the last drive against KState without it, but this just confirms for me my confusion as to why this formation isn't utilized more often during regular game situations. Announcers have stated almost every time they see it that it forces the defense to declare their coverage, usually man-to-man, yet it has been trotted out less and less each of these games. I also understand that it's about personnel, but the Cowboys have some large, physical wide receivers that could work out of this formation if you wanted to line them up in the backfield.

I'm going to leave it at that. It's up to you guys to tell me if I'm off the reservation with this.

But I have to say I would be a lot more comfortable if Yurich would talk about diamonds more than my wife.