Our first installment of Pro Pokes takes an in-depth look at Justin Blackmon and Dez Bryant's success in week five.

For the rest of the NFL season I will be bringing you guys comprehensive reports on how the Pokes in the pros are doing by breaking down the All-22 film. When the coaches film becomes available for these games varies, but I will try to have it up on Wednesday or Thursday each week.

First up, I take a look at Oklahoma State's two star receivers who had huge week fives.

Blackmon made his season debut on Sunday against the St. Louis Rams after missing the first four games of the year due to suspension. It didn't take Blackmon long to make his presence felt, as his first catch of the year resulted in a 67-yard touchdown less than five minutes into the game. 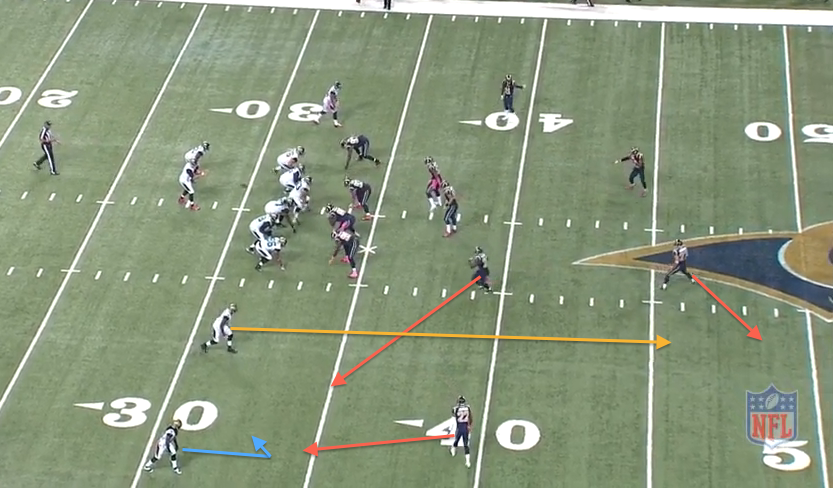 The Jaguars line Blackmon up in the slot here and have him running right up the seam. Usually the middle of the field is closed down against a single high safety look while the weak spots are generally verticals on the sidelines, but this play is going to work because of a subtle playfake by Blaine Gabbert. Gabbert may be terrible, but he actually does a pretty good job selling the quick hitch to Ace Saunders on the outside here, and it pulls the nickel corner away from the hashes and allows Blackmon to get a huge opening in the middle of the field. 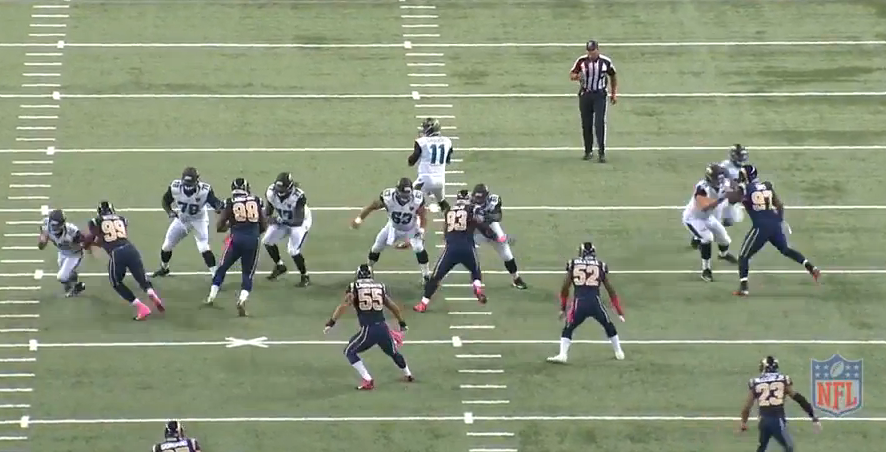 With Blackmon wide open, Gabbert makes the easy throw and Blackmon makes a move to beat safety Matt Giordano and he's able to put on the afterburners and beat a herd of Ram defenders in a race to the endzone.

Blackmon also beat man coverage a couple of times against the Rams and Gabbert and Henne actually made some good throws into some tight windows to get him the ball. Janoris Jenkins drew the Blackmon assignment for the majority of the game and Blackmon wound up catching three of the four balls throw to him for 60 yards while Jenkins was covering him.

Here Blackmon encounters press coverage from Jenkins and purposely gets outside position. As soon as he gets to the sticks, Blackmon turns and gets in position to make a tremendous grab for a first down. It's a simple timing route against man coverage and Blackmon wins the route and finishes the play with a great release from his break and stellar hands.

There's no denying that Blackmon is a tremendous talent and the only thing holding him back from becoming a star is who is throwing him the ball and how he has behaved off the field (and sometimes even on the field). If Blackmon can get his character issues under control (still hard to believe the trouble he's had after those heartwarming stories about he and Gene Frenette), he'll be set to take a path to stardom very similar to the one Michael Crabtree, my favorite college athlete of all-time and the only other two-time Biletnikoff Award winner besides Blackmon, has.

Crabtree had some questions about his character arise when he held out as a rookie for a bigger contract and had to bide his time before becoming a super productive receiver. With Alex Smith at quarterback, Crabtree never found a place in San Fransisco's offense. Crabtree got twice as many targets and had five times as many 100-yard games when Colin Kaepernick took over at quarterback, and he would have caught the game-winning pass in the Super Bowl if Cary Williams didn't hold him.

As soon as Jacksonville finds themselves a quarterback, Blackmon will be poised to experience a similar rise in the hierarchy of NFL receivers.

How high Blackmon can rise remains to be seen, but he can only hope that he can reach the same stratosphere that Dez Bryant finds himself in nowadays.

With Calvin Johnson and Julio Jones both banged up and A.J. Green saddled by Andy Dalton, Bryant may be the best wideout in football right now. According to Football Outsiders, Bryant ranks fifth in the NFL in DYAR (Defense-adjusted Yards Above Replacement), second in touchdowns with six behind Wes Welker of Peyton Manning's Madden offense and tied with Jimmy Graham and Julius Thomas, also participants in video game offenses, and third in first downs with 24.

And keep in mind that Bryant can only compile stats when the ball is thrown to him, and often times defenses have employed bracket coverage on Dez to take him out of the game. But because he doesn't pick up a stat for a particular play doesn't mean his impact wasn't felt. Bryant, as well as fellow Cowboy star Jason Witten, both make this 82-yard touchdown happen for rookie wide receiver Terrence Williams. 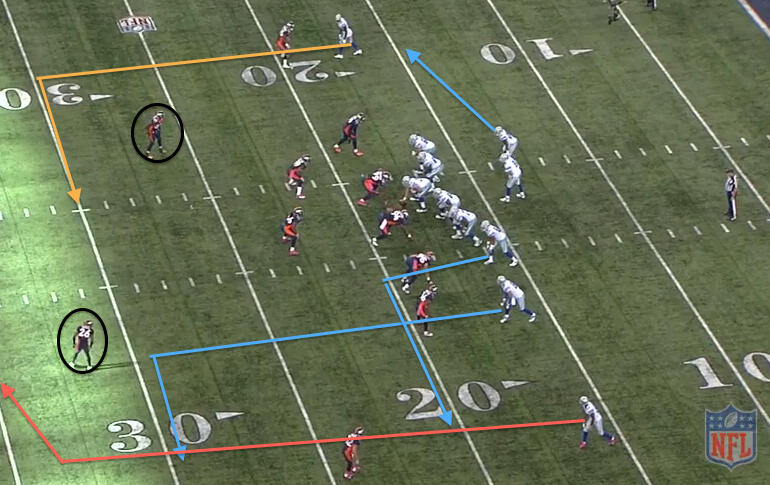 The Cowboys are going to flood the strong side here with two outs on the left side of the formation (Witten releasing deep from the outside and James Hanna releases from the slot) and a deep in route from Bryant on the right. Meanwhile, Williams is going to run a deep post route, running all the way to the 35 before making his break. 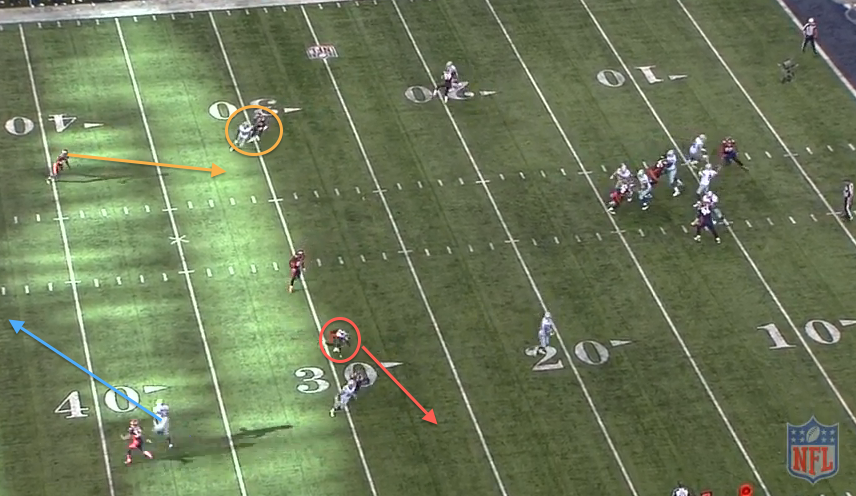 Here you can see how Witten and Bryant have made this play work despite not getting the football. Both of Denver's two deep safeties are going to bite on their in cuts. With Williams cutting across to the right side of the field, it is the safety on Bryant's side of the field (Duke Ihenacho) that is responsible for providing over the top help on the deep route, but Bryant has already killed the Broncos enough in this game to warrant additional attention (it looks like he beat his man on this in cut).

The result: a tremendous throw from Romo and a nice grab from Williams gets Dallas six quick points.

Now let's take a look at the plays Bryant actually gets credit for because, even though we know he's incredible, it's always fun to text your friends that THAT guy went to your university every time he makes a sick play (I'm going to do this roughly infinity times with Marcus Smart). 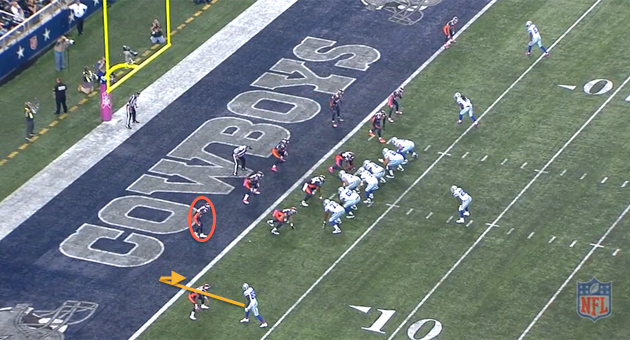 This is from Bryant's second touchdown on the day. Dez has become excellent at going up to catch the fade route in goal-line situations (coulda used ya in Morgantown, Dez), but here Bryant makes the jumpball unnecessary. With Dominique Rodgers-Cromartie ceding some ground and expecting Bryant to go for the back pylon, Bryant uses his preconceived notions against him and catches the backshoudler throw without having to leave the ground. Safety Rahim Moore could have provided some more support here, but it appears DeMarco Murray's movement out of the backfield (though he didn't run a route) froze Moore just enough for Romo to take advantage of the one-on-one matchup.

Here is Bryant's first touchdown from this game, which also came in the redzone.  Dallas is going to run a double crossing pattern (drags) with Dez breaking towards the right corner and Williams breaks towards the left corner. With Witten releasing to the left after his blocks, the zone coverage is completely spread out, and safety Rahim Moore is isolated against Bryant as he makes his horizontal trek across the endzone.

That's not even really a good decision or a great route against zone coverage in this situation. The Broncos were able to pass Bryant off and give him the smallest possible window of getting the football. But when you have a tremendous quarterback in Romo and an elite receiver in Bryant, these are the kinds of plays you can magically put together.

The Cowboys were also able to find Bryant in space by taking advantage of zone coverage with a drag route. In this case, with no endzone compacting the field and a linebacker responsible for covering the middle of the field, Bryant has a ton of room to work and he's isolated against a mediocre cover linebacker. 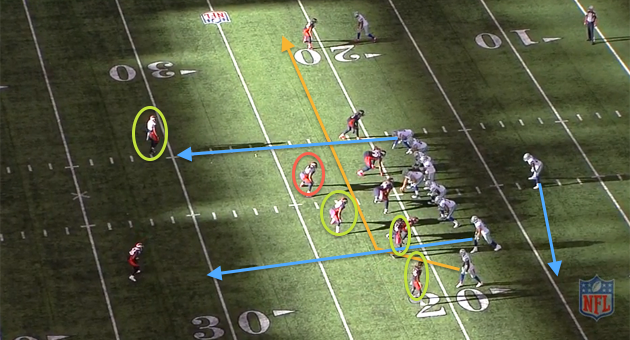 The defenders taken out of the play are circled in green and the defender zoning off the short middle is circled in red (Nate Irving). With three vertical routes and Witten releasing from the slot, the defense is going to completely vacate the right side of the field, and Dallas' scheme puts Bryant in a great position to make a play.

Finally, we'll take a look at what may have been Bryant's most electrifying play: In the fourth quarter he straight beats Rodgers-Cromartie on a go route up the left sideline, makes the safety dive at his feet and miss and then forces Rodgers-Cromartie to run into his own guy before being brought down after a 79-yard gain.

I may be getting carried away with myself, but at this rate, there might be a second #88 on the Cowboys Ring of Honor in a couple of decades.