What started off with a bang quickly devolved into a snoozefest as the Cowboys methodically dispatched the worst team in the Big 12 and turned their sights towards the showdown in Austin.

-Is it ironic that Roland is back to return with Gilbert? I mean, you have a guy that epitomizes speed in motion with a guy that looks like he's running in molasses.

-Speaking of speed in motion, how about the Jayhawks slowing Gilbert down at the 50 and they STILL couldn't catch him.

It was pretty much downhill from there.

After piling up the rushing yards the previous two games, the Cowboys mustered only 85 yards on the ground, instead relying on Clint Chelf's arm to grind up Kansas.

Yes, you read that correctly.

Choo Choo produced his usual 51.4 completion percentage (19-37) while tossing 3 TD's and 265 yards (almost 14 ypc), along with no interceptions. Let us note that the Jayhawks do possess the #9 defense against the pass, and also in pass efficiency.

OSU produced only 1 drive longer than 7 plays, and 9 drives of 5 or fewer plays.

Kansas' offense was pretty anemic, although they did manage several decent drives.

Enough of this, I can't really find anymore motivation to analyze this game. It was a win that we expected.

Instead, let's look at some of my favorite moments...

I can't say enough about the development of Tyler Johnson. His speed off the edge, while not necessarily resulting in a lot of sacks, does result in plays like this. Watch how fast he comes off the backside to make the stop:

This next play was so well designed it allowed the Cowboys to get away with what might normally be called as a "pick." Desmond Roland runs a wheel route out of the backfield, while Charlie Moore runs a short hook directly in the path of his route.

The Kansas defender doesn't recognize the route or the obstacle and gets tied up with Moore. By the time the CB covering Moore realizes what's happening, it's too late. Easy lob to Roland for the TD. Very well designed play.

Later in the game, while the outcome was definitely NOT in doubt, no one should ever question whether or not Glenn Spencer is still invested in what goes on...

With Roland assuming the starting RB role and Rennie Childs getting carries, Jeremy Smith's impact has greatly diminished. That's why it was nice to see this:

He showed patience, vision, and the burst we remember.

Last but not least, there's been plenty of material noting my love for the diamond formation, which reared it's ugly head yesterday...

@RobertW_CRFF happy about that formation?

Which brings us to the last video.

It has been well documented that lining up in this formation, or some variation of it, almost forces man coverage on the outside, which then allows you to essentially throw it up and let your guy make a play. When you have the Moore Twins out there, that's to OSU's advantage. But the Cowboys have another weapon that may turn into quite the monster for just such situations. Watch how the LB's roll up on the line of scrimmage on the play fake...

Chelf would go under center in the diamond a couple of plays later and it resulted in a fade route TD to Tracy Moore.

This was the most we've seen the diamond since a long freeking time ago. I'm putting this on continuous loop along with the Mississippi State game.

And now all eyes turn to Texas.

Everyone thought the game in Austin was going to be a big one for OSU, and we were ALL ABSOLUTELY RIGHT.

As noted here, the top three teams in the conference all play each other from here on out: 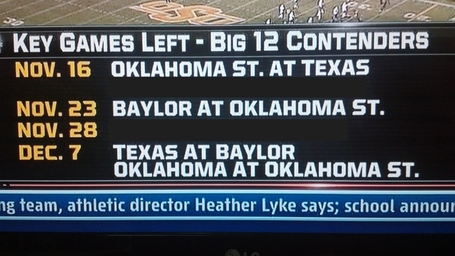 I blacked out games involving Texas Tech (@Baylor, @Texas) because, well, I don't need to explain that.

While I want the Cowboys to win any way they have to, l'm also about Baylor NOT winning the Big 12 title. That's why Texas escaping West Virginia last night was huge in providing the most obstacles. If we want truly epic and compelling football on that last weekend, OSU needs to beat the Longhorns and Baylor. At that point either the Cowboys or Texas could claim the championship by winning. Any loss by Oklahoma State leaves things in the hands of Texas and Baylor.

And just in case there are those of you who say "Screw Texas," well what could be bad about the Longhorns winning the title and trying to figure out how to get Mack to retire because NOBODY fires a national championship winning coach who might have just gone undefeated in conference play. I would much rather live with that than Baylor prancing around for a year trying to figure out how NOT to use the tarp in their shiny new home.

So let's get about the business of developing our collective anxiety for the trip to Austin next Saturday.