Share All sharing options for: Picks From Joes: #IHateBaylor

Are there other games on this weekend? There may be, but who cares about them? The Big 12 Championship will be decided this weekend at Boone Pickens Stadium. It will be wet, it will be cold, and they'll only be about 18 Baylor fans in attendance. Time to put on the long johns, hide the pocket shots in the jacket, and party like we're all Rob Ford. Let's pick em.

Oklahoma at Kansas State: I hope Bill Snyder has kept that Cotten Bowl jacket close, it's gonna be cold in Manhattan. Both of them. Jack Frost will be nipping at noses, nipple,s and ballsacks this weekend. Luckily for Stoops Mack Brown took his balls a few weeks ago, so at least he doesn't have to worry about that. Oklahoma wins 28-27

Kansas at Iowa State: Charlie Weis is fat. Round here we like making fun of fat people. Cause they're fat. But aside from the fact Weis single handedly supports an entire Wendy's franchise, there is nothing funny about this game. Just sadness. Kansas wins for the second time in two games, 24-10.

Baylor at Oklahoma State: I have learned a couple things about Baylor fans this week. First, they have absolutely no sense of humor. They live a pompous, limp-dicked experience. Case in point, they won't find this next picture funny: 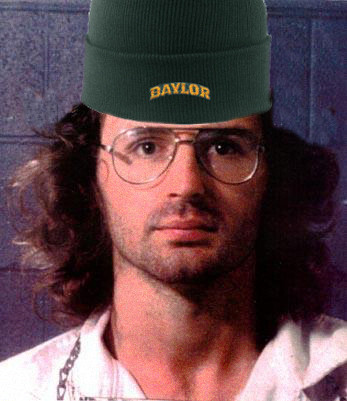 See, they're currently on some Baylor message board trashing me and my family and blowing us up with new members who only exist to troll us. That's not even a good photoshop job, I spent under two minutes on, but some Baylor fan will get his speedo in a twist and tell me what a dick I am. It's amazing to me that these people get so offended at the slightest joke. I suspect the residual toxins from the Dr. Pepper plant are to blame.

The second thing I've learned is they don't make sense as a fan base. They're having their greatest season, ever, and they won't even come to the damn game tomorrow. They returned the majority of their tickets to Saturday's game. What's a majority you ask? 86 percent. Why? I don't know, we sell Dr. Pepper at the Boone Bowl. From what I've read on Baylor websites they're going to avenge the beatings we laid on RGIII and they won't even show up to watch it.

You see, hating Baylor is just too much fun. Both their basketball programs are on probation, which is probably comforting to them, as being in trouble with the NCAA is how Baylor athletics prefers to live their lives. Hell they went from 4-8 in 2009 to 10-3 in 2011. Where the fuck is Sports Illustrated on that shit?

The best part about this game? If we lose then nothing happens, we lose peacefully, quietly. We'll enjoy it. But if we're badass, and we can win this thing... Baylor fan's, you will look like jerkoffs in the eyes of millions of Harris Poll voters. There is absolutely no pressure on us. And I love that.

So Baylor fucks I leave you with this. Enjoy your success, enjoy your team, enjoy your Dr. Pepper. Support them (which would include going to away games unless you're all pussies. Which may explain why most of you will stay in Waco) and ride this season into the dirt. Because with your basketball team putting you on probation, your one more Lache Seastrunk away being piledriven straight to hell by the NCAA.