Oklahoma State grades and commentary for the Baylor game

Share All sharing options for: Oklahoma State vs. Baylor: Grading the Game

Holy domination Batman! Baylor finally plays "someone" and suddenly the ESPN darlings are Baylor again; as in the "RG3-and-out" Baylor we've become accustomed to in the Briles era. The Stillwater curse continues for Art Briles and the Bears as the OSU offense and defense each played their best game of the year on the Big 12's brightest stage. Welcome to Stillwater Baylor!

Without question, the offensive performance against Baylor was the best of OSU's conference schedule – by a substantial margin. Yurcich opened the playbook, Chelf was unconscious passing the ball, the offensive line provided running lanes and good pass protection, and the receivers simply abused the Bears secondary.

As I mentioned on the Cowboys Recap for Free hangout, OSU gave Baylor several new plays and formations they hadn't seen on film. Using the first drive as an example, LEGO guy debuted a quick pitch to Roland for a five yard gain on the first play. Kye Staley then became the go-to guy on the ground and the double tight-end set was resurrected from the Fedora play book. And check out the zone-read run look Chelf gives on this huge pass to Ateman:

As the game wore on, several new trick plays also went for big gains and tendencies established in the previous 3 games (i.e. Chelf as a runner) fell to the wayside. Other than a few questionable calls on manageable 3rd down situations and an over-reliance on run plays around the edge, Yurcich called a masterful game.

The Cowboy's offensive line dominated the Baylor front and linebackers - especially in pass protection. Chelf had time to throw, defensive linemen did not block many passes at the line of scrimmage, and running lanes were opened early and late in the game. The one negative was OSU's inability to run for short yardage in obvious run situations. Faced with 3rd and short (and one 4th and short) several times in the first half, the OL was unable to get a push, causing the play to be stuffed for a loss or no gain.

Similar to Walsh's game against UTSA, Chelf simply could not miss, going 19/25 (76%) for 370 yards and 3 TDs. Chelf outplayed Bryce Petty in every facet of the game and gave OSU fans a glimpse of his potential. I've been hard on Chelf in the past, but he has improved continuously since earning the starting nod - this week, markedly so. Sooners beware.

Desmond Roland and Kye Staley opened the game on a torrid pace, laying the groundwork for an effective passing game. After Roland's touches were limited (shoulder injury?), Jeremy Smith alternated between hot and cold as he would follow a big run with a 49 yard dash to the sideline for a 3 yard loss. Before being knocked unconscious, Rennie Childs impressed (again) with his talent and running style. Overall, the yards per carry weren't great, but considering the unit lost 2 contributors during the game in Roland and Childs, the running backs were very effective, didn't turn the ball over, and kept Baylor's focus while Chelf was unloading on the secondary.

Simply put, the OSU wide receivers abused the Baylor secondary all night long. The Cowboys were bigger and more physical across the board and it showed up big on the long ball. Seales, Ateman, Sheperd, and the Moore twins almost let Cowboy nation forget about Josh Stewart for a game. Almost.

For a unit that struggled mightily early in the season, the receivers have performed at a very high level in consecutive weeks against two of the better secondaries in the league. The OU secondary will provide another big opportunity, but Mikey Stoops has to be concerned about what this group brings to the field. Personally, I'm looking forward to Stoops' "ants-in-the-pants" sideline dance as the OSU receivers showcase their skills during Bedlam!

Given the stakes and opponent, the OSU defense played perhaps its best game of the Gundy era. While in many ways statistically similar to outings by both Kansas State and Oklahoma against the Bears, the outcome differed vastly. The chart below graphs Baylor's total yards on the ground and through the air. Notice the three low points against KSU, OU, and OSU are all nearly equal: 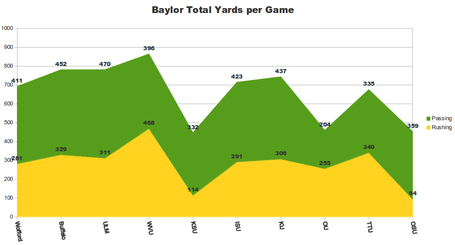 Despite the yardage similarities to the KSU and OU games, the OSU defense confused Petty for much of the game and was opportunistic in in the red-zone, forcing two turnovers and scoring on a third. In addition to the "Psycho" look, the Cowboys appeared to have several special defensive personnel packages prepared for Baylor. While the referees interfered some with the substitution patterns (the coaches were pretty animated about this on the sidelines on at least 4 occasions), the different schemes and personnel caused Baylor significant problems.

Baylor went 3 and out on 4 times and picked up the majority of their points after the rest of the nation had already switched channels. A great ESPN article puts the defensive performance in perspective and is well worth the read.

By any measure, this was a fantastic performance by Glenn Spencer and his defense!

Historic side note: In 2011, Bob's Bears netted 622 total yards and scored 24 points with 5 turnovers. Entering the game with OSU, Petty's Bears were on pace to break all of Bob's records – yet they managed "only" 453 yards and 17 points on 3 turnovers.

Entering the game with Oklahoma State, Baylor's run offense had gained the majority of their yardage on runs between the tackles. Bears' fans can complain all they want about the absence of Martin and Seastrunk, but the reality is their run game played right into the strength of the Cowboys defense. As such, Shock Linwood and the BU run game fizzled – to the tune of 205 yards below their season average. Baylor quickly became one-dimensional in their attack, sealing their fate. Defensive ends Jimmy Bean and Emmanuel Ogbah brought pressure off the edge on key passing situations – often from a 3 man rush (both Ogbah and Bean are now tied for the sacks lead with 4 apiece). James Castleman more than held his own against the much ballyhooed Cyril Richardson and his forced fumble on the 1 yard line was a huge difference maker.

While the linebackers did not show up large on the stat sheet, they were very effective in pass coverage while completely stuffing the BU run offense. Despite registering only 2 tackles, Ryan Simmons was a physical presence on the defense who garnered mention from the broadcast booth. Shaun Lewis had 8 tackles and Caleb Lavey recorded 6. Lyndell Johnson and Joe Mitchell replaced Lavey and Simmons on several third and long situations, providing the defense with improved pass coverage without sacrificing much run stopping ability.

For the first time all year, Lavey dropped a sure interception – which was tipped in the air and completed to a Baylor WR for a big gain. Later in the game, however, Lavey atoned for his drop by forcing a fumble which was recovered by the Cowboys.

Baylor likes to attack the safeties on opposing defenses – forcing them into unfavorable coverage match-ups through their insane wide receiver splits and a well executed zone-read play action attack. With a few exceptions, Lowe and Gary rose to the challenge, limiting Baylor's big play ability while helping in the run game. Lowe had a highlight-of-the-night in one-on-one coverage, but he was also flagged on a pass interference call that extended a drive. Gary also bit on a fake and slipped in coverage, permitting the first big "chunk play" of the game.

Despite missing Justin Gilbert for much of the game, the corners did a great job in coverage. Patmon especially showed up huge for the Cowboys, continuing his streak of great performances. Peterson was burned once or twice and Gilbert didn't have a particularly good day, but overall, the group was very solid against a strong Baylor passing attack. For the game, Baylor passed 17 more times (!!) than their season average, yet recorded their lowest rating of the year.

In a rarity on the season, special teams were not very special. Punting was average to poor and included a shank and a touch-back or two. The punt return game was hampered by Stewart's limited touches and an illegal fair catch call which negated what was sure to be a big return. Gilbert was not used in the kickoff return game, and Baylor broke a couple of long kickoff returns (30-40 yard line) of their own. Overall, a very average outing for the special teams. Thankfully, none of it really mattered.

Despite the cold weather, the OSU home crowd played a key role in this win. Standing for most of the game, the crowd brought the noise on every down. Once Baylor began falling behind on the scoreboard, crowd noise seemed to wreak havoc on their offensive tempo, causing the Bears to uncharacteristically burn through timeouts and play clock time. Towards the end of the game, with Baylor driving at a torrid pace, the crowd noise also seemed to cause the Baylor center to snap the ball before Petty was ready - resulting in a turnover and Patmon's 78 yard run back.

If you were a part of the crowd, be sure to pat yourself on the back and sign up for the Gigapixel (26B pixels) photo that was taken. Well done Boone Pickens Stadium!