Marcus Smart decided to throw in a bit of a clunker, including missed free throws down the stretch, but OSU managed to survive a scare from a solid Butler squad.

This was the dud.

They didn't shoot all that well. Made a number of poor decisions. Once again gave up a decent half time lead. Missed a number of key FT's that would have iced the game.

But Butler also cooperated, missing on a couple of chances to tie or take the lead late.

So when Michael Cobbins sent Butler's last ditch effort at a game winning 3 into the seats at the buzzer, the OSU faithful breathed a collective sigh of relief.

The Cowboys were notably sluggish on both ends of the floor, but found their stride late in the first half to surge to a 14 pt lead at the break. Butler definitely retained much of the identity instilled by Brad Stevens, recently departed for the NBA. They play hard, disciplined basketball, and shot well across the roster.

Le'Bryan Nash and Kamari Murphy gave the Cowboys a little boost early, and I would love to see this kind of scoring line early in a game... 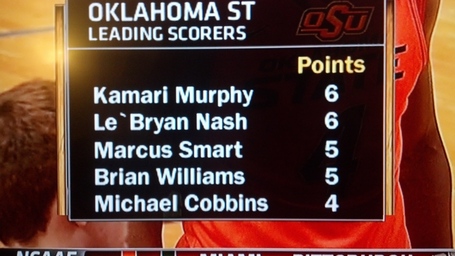 Coach Ford gave us a brief moment of levity...

It was interesting how OSU got out to their lead. It was like a slow bleed, with a 4-5 point margin ballooning over 4-5 possessions.

But once again, one thing was abundantly clear....

Phil Forte has the ability to be an offensive presence coming off the bench, but if you don't also bring in someone with the ability to break people down at the point, his presence doesn't have the desired effect. Again, Markel Brown can be a serviceable PG, but only to protect the ball. You need someone who makes the defense pay attention at all times. Brown is NOT a dribble-drive threat at the point.

Clark has already demonstrated that he brings both offensive and defensive presence, giving Smart valuable relief.

The Cowboys missed a number of close shots and left Butler a BUNCH of wide open looks. It's amazing how OSU can look so in sync one moment, and so stagnant the next. They were horrible on a number of defensive switches, and Smart made quite a few poor decisions in shot selection. They showed themselves to be very vulnerable to a disciplined, well coached team.

It was never more evident than this...

Here was the score and time left after Forte's last three pointer: 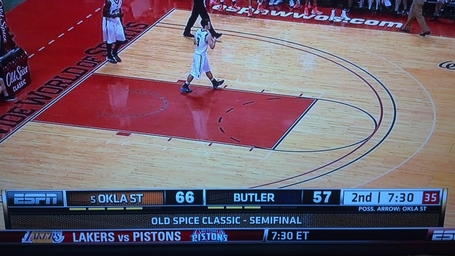 The Cowboys then proceeded to do the following...

Do that against a better team (Kansas?) and they walk away with a loss. Essentially two players off the bench (Hammonds' 1 minute doesn't count), and 4 starters playing 32+ minutes (3 played 35-36 minutes). OSU will die down the stretch if they don't get more production from the bench.

Regardless of what happens Sunday in a rematch against Memphis (you don't think they'll be fired up for it?), my prediction is this...

With Clark in the lineup, this team could win the whole enchilada.

Without him, this is an Elite Eight team at best.

That one extra player in the lineup makes all the difference.

No matter what, Sunday vs Memphis should be fun.