Before we celebrate the 25th anniversary of Barry’s 1988 Heisman season this Saturday against Kansas, let’s look at what made that season so great.

• 373 – Rushing attempts...OSU’s leading rusher, Desmond Roland, is on pace for 151 attempts this season (including a 13th game)

• 39 – Rushing TD’s (NCAA Record)...Would place him 10th among teams during the 2012 season, ahead of teams such as Wisconsin, Alabama, Ohio State, Texas, and Georgia.

• 237.5 – Yards per game (NCAA Record)...OSU averages 180.2 as a team through 8 games this season. Would place him 13th among teams during the 2012 season, ahead of teams such as Wisconsin, Alabama, Florida State, Clemson, and Notre Dame. 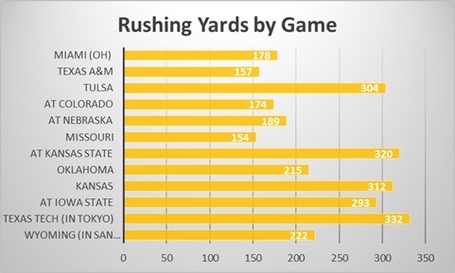 With the Kansas game upon us, what about the O'Colly's coverage of that game back in 1988. Well, thanks to Pokelahoma, we have some of that: 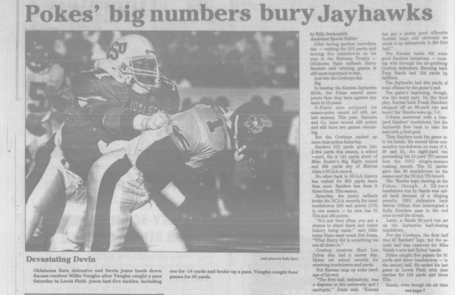 By the time the Kansas game rolled around in November of 1988, Barry was well on his way to the Heisman….at least the O’Colly thought so. Everyone’s favorite shape shifting running back racked up 312 yards and five touchdowns. A number so insane he overshadowed a three touchdown day by wide receiver Hart Lee Dykes.

I almost feel sorry for Kansas running back Tony Sands. You’ve never heard of him, and he ran for 154 yards in the first half of a game no one will remember he played in. That’s a remarkable performance and should be commended. It’s not his fault Barry broke NCAA records for touchdowns, points, and a school record for yards.

Backup sophomore Gerald Hudson finished with four attempts and one hundred and twenty one yards. Our very own 40 year old man went 13 of 19 for 181 yards. Quite business like. Coach played football like he gives press conferences.

The defense graded out poorly at a D- for everyone but the secondary. Coach Pat Jones, not a fan of hyperbole or poorly placed and confusing sarcasm said "The first half, defensively, was a disgrace to this university and I apologize." I’d say it has taken 25 years for that to change around here.

Anyways, Barry was incredibly special and we don’t do enough to remember that season. I hope this year changes that. Side Notes: O’colly ads that caught my eye included a PC with a meg of memory for $2699, but you could get four nights and three lift tickets in Vail for less than $200. Odd how much those have flipped around. Beer specials haven’t changed much with quarter draws at Joes available for any Kansas fan who might have needed one.

We know the numbers, and we have an OLD newspaper article, but what was it like to actually watch him play? In order to get that answer, we look to an OLD person...Robert what can you say about how special that season was?

Thanks for the "introduction." First, I want to say how special it would have been if we actually had TV coverage back then. Network exposure was still extremely limited, so watching Sanders live was a treat you didn't pass up. Bob Barry Sr was my "TV." His descriptions were magical. He use to call EVERY yard line, "He's at the 20, 21, the 22, all the way out to the 23 yard line!" With Sanders, his single yard would suddenly turn to 5 and 10 yard increments. You literally sat on the edge of your seat every time he touched the ball. Imagine Michael Jordan times 100. It was that special.

The story that sticks in my head from that year is still clear as a bell.

My first wife and I, and my parents, flew to Los Angeles the weekend of Bedlam to be a surprise part of an engagement party for my life long best friend, who happens to be a Sooner Loyalist. The day of the game we all had lunch (including his parents), and proceeded back to the hotel TOGETHER to watch the game in our room (whatever possessed us to do such a thing still baffles me).

So here we are, in a decent sized room with two double beds. My friend, his fiance, and his parents are all sitting around or laying on one of the beds. My side of the crew is gathered on and around the other bed. As the game got under way...yes, the tension in the room was rather "thick"...my first wife decided she wanted to sit next to me on the bed, which would place her BETWEEN me and my mother. This mother. The same one that made her pee her pants a couple of years before while watching a Dallas-NYGiants game on a "calm" Sunday afternoon.

I said "Are you sure you want to sit here? This isn't going to be a calm place."

She said that she would be fine. I said ok.

When that play was over, she was no longer on the bed. I'm pretty sure her exact words were, "You people are fucking nuts."

After Barry left for the NFL, Thanksgiving became my favorite holiday of the year, as Detroit ALWAYS plays on Thanksgiving Day. I lived for the opportunity to watch one of his games. His 2,000 yard season was so awesome, especially since the Lions never really blocked for him. If he had ever played for a team with even a mediocre offensive line, who knows what records he would have set. But that's not what he was about, and that was probably the most spectacular thing about him. It broke my heart when he retired from the NFL, and it took almost 5 years before I even cared to watch more than the occasional game, with the exception of the Super Bowl.

We like to talk about the "great" ones...Michael Jordan, Wayne Gretzky, Mariano Rivera, etc...but Barry Sanders set a standard that in my mind will NEVER be matched, much less surpassed. To possess that ability, which is purely God-given, and yet carry yourself in such a manner that if you met him in public you would never guess the greatness you were standing next to...that combination of extraordinary talent and humility may never be seen again.

And I got to live through all of it.

THE greatest pure athlete of all time, and he was an Oklahoma State Cowboy.