With a new offensive coordinator at the helm, every week seems to be an unveiling of what this offense is as a whole. Is it a zone running team? Is it an air-raid team? Is it both? Well, from what it seems to me, the OSU offense does not have an offensive identity that is set in stone; instead, they alter their offensive plan each week to put themselves in the best chance to win. Now not only is this obvious by now, but you'd have to imagine that OSU would have a very conservative approach coming into this game. Still, this game was very important was because it showed that O.C. Mike Yurcich can change the game-plan during the game. Today, we'll take a look at OSU's simple-yet-effective run game and enhanced passing attack.The first play from scrimmage for OSU, they came out in a new formation. 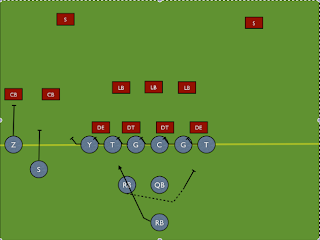 This is a Pistol Strong Twins Over formation. Since the left tight end (Y) is the first of two men on the line of scrimmage and there is no eligible receiver on the right side, he is ineligible. This limits you in the passing game, but helps in the running game. Immediately after this play (above), the Cowboys came up in a slightly different look. 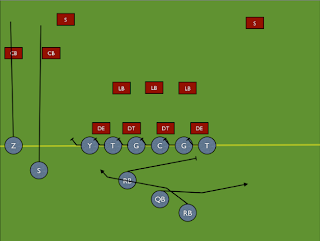 Same formation, different backfield. This will be a recurring theme in the OSU offense, with OSU using the same formations but altered backfields. This outside zone read, which is now the Pokes' bread and butter, got Chelf a first down on the second play. This later set up for a play-action pass in the first half (below). 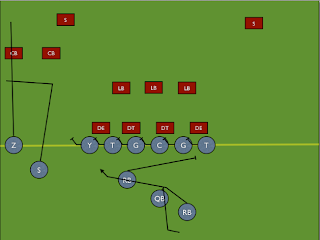 This same outside zone read was featured in all kinds of formations by the Cowboys. In a gun offset (above), in a gun split (left), and in the pistol slot (right). 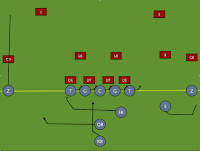 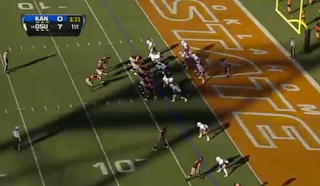 Another addition to this offense features a screen with most running plays. 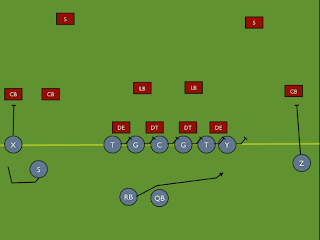 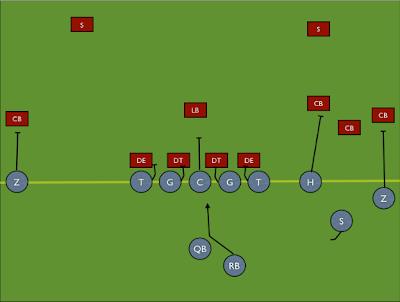 As far as the passing game is concerned, OSU had great success with three main concepts/plays: the shallow cross/verts, the double inside route, and the fade.

First the shallow cross and verts. The Shallow cross, below, is a zone-beating concept where the quarterback reads the middle linebacker and throws it to the man that he is not covering. For example, if he jumps on the shallow cross by the "S" receiver, the QB throws behind him on the dig by the "H" receiver. This also works the other way around. Chelf didn't really throw to either of them; each time this play was called, he threw to the "Z" receiver (Seales) on a 10-yard out. 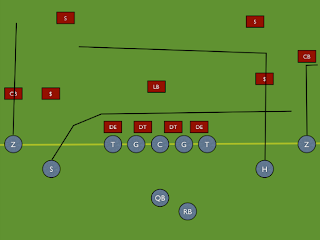 This shallow concept also appears in the verts, or verticals concept. 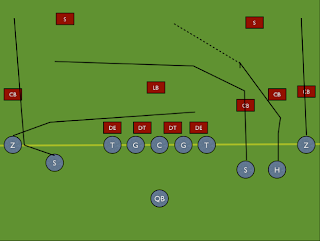 Now here, the shallow cross is being run by the "Z" receiver, and the dig is converted to a crossing route by the right slot receiver. The two times that this play was run successfully, Chelf targeted the "H" receiver (Glidden, I believe). The first time, Glidden saw a hole in the coverage and stopped in the "soft spot" of the zone. The second time, with about 20 seconds left in the first half, he kept running behind the crossing route, and he caught the ball inside the 10 yard line. 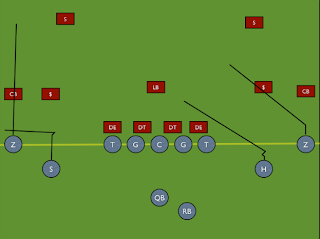 The second concept, the double inside, is something that the Cowboys practice before every game in warmups. The double inside route combination features two receivers both running routes to the inside (the middle) of the field. In the play above, it's just with two quick slants. 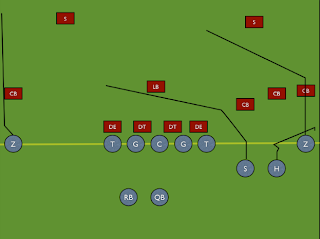 Here, it's in a trips formation with the inside routes by the inside slot and the outside receiver. Still, when they ran this play, Chelf targeted the isolated receiver on the left side and drew a penalty on the Jayhawks. 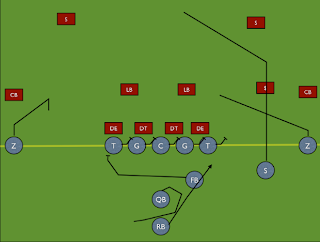 The fade was used twice by the Cowboys, with the first time from this interesting formation- 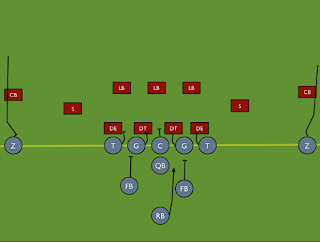 It looked like it was an inside zone called with Tracy Moore running a fade off the right side. If you also noticed, this is the same play (and the only running play) that they ran out of the Pistol Diamond today, bringing the amount of different plays out of the diamond to two when you include a play-action pass called in the third quarter.

The final play that I'm going to talk about resulted in a big touchdown for the orange and black. That play just happens to be one that we are all too familiar with - the stick.
The stick has been used extensively throughout the OSU air-raid era, usually combined with a draw play. Since Holgorsen is gone and Yurcich is here, he calls the play with his own personal twist. 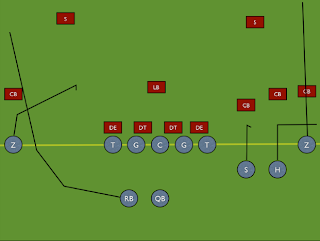 Instead of the stick being paired with the draw, he uses a "snag" concept on the backside. You're probably asking yourself, "how in God's green earth did he get that wide open?" Why don't you pay attention to Charlie Moore on the left.

This is the beauty of the rub route. It's not technically illegal, but you still have to be sneaky about it. If the gif didn't load, or you just have terrible vision, the gif clearly shows Moore as he purposefully stands in the way of Roland's defender. This prevented the defender from staying on Roland, giving Chelf a throw that Betty White could make.
Well hopefully you've learned something from this blog, and your eyes aren't too damaged from the constant gifs. The entire point of these analyses are to educate the average joe on what he's watching, and have some fun in the process. Who said X and O's can't be fun too?
Let's all hope the Cowboys can keep up this offensive success for the rest of the season, with games against the Horns, Bears, and the Sooners. I hope you liked this post, and as always, keep lovin' football. -TF www.cfboffense.blogspot.com