Bedlam Preview: When Oklahoma State Has The Ball

Oklahoma State will have to come close to matching their offensive efficiency from the Baylor game in order to defeat the Sooners defense, as well as the awful conditions.

Share All sharing options for: Bedlam Preview: When Oklahoma State Has The Ball

Oklahoma's defense should provide considerably more problems for the Pokes on Saturday than their offense will. Oklahoma shut Baylor's high powered offense down for the first 28 minutes of their game before some wackiness and offensive ineptitude allowed the Bears to turn it into a blowout and some of the advanced numbers have their pass defense rated right around the top 25. Add in the tumultuous conditions, which should make both teams more reliant on the running game, and thus more one-dimensional, as well as the stakes and the pressure on the Pokes, and Oklahoma State is likely facing its toughest test of the season on offense.

After taking a look at all of Oklahoma's games from this season, it's obvious that Mike Stoops has a lot of faith in his secondary. Against Baylor, he used a ton of man coverages, mixing in some underneath zones and even some robber concepts with some single high safety looks. For about half the game, Oklahoma's ability to man up on Baylor's receivers troubled the Bears just as much as the Cowboys did, but Baylor was able to make some adjustments and, because Oklahoma's offense didn't put any pressure on them to score, run the ball often.

Same goes for the Texas Tech tape. I saw a lot of man coverage in this game with some cover two, some cover one and even some cover zero on blitzes. When Texas Tech went five wide, Stoops often went to a cover zero look, forcing Davis Webb to get the ball out quickly on predictable routes. I actually thought Webb played pretty well in this game given that TTU couldn't really run the ball, and freshman corner Zack Sanchez really hurt the Sooners, especially when the Red Raiders were able to isolate him without safety support.

Those single high looks will give the Pokes a great opportunity to attack the seams, or at least to use vertical concepts with their slot receivers. If Clint Chelf can look off that safety to either side, Oklahoma State has the playmakers in the slot to make things happen down the field. I can see Oklahoma State procuring some big plays by putting Jhajuan Seales and Josh Stewart, who should be a lot closer to 100% after the bye, in the slot opposite each other in four wide sets. Getting the safety to bite either direction would allow Seales or Stewart have a one-on-one matchup going down the field, and that's a matchup they've won often this season.

Here's a look at Baylor getting that look and finding a way to pick on the slot corner, usually a safety but occasionally a nickelback, by taking his over the top help out of the play, drawing a pass interference flag.

Oklahoma likes to play off man coverage most of the time, leaving them susceptible to quick hitches and outs on the outside. They do tend to get physical in the slot if they can, which helps eliminate some quick slants, but Baylor was able to use some route concepts to create space in the middle of the field against man coverage, and the Pokes should use similar combinations to get their players the ball in space.

Exploiting the middle of the field should be Oklahoma State's focus in this game. We've seen them do this a lot this season out of the diamond formation by utilizing play-action, and now they can start taking advantage of that area of the field from some of their spread formations. If the Cowboys can run the ball effectively, get some big pass plays out of the diamond and get a few chunk plays by taking advantage of Oklahoma's man coverage, the Sooners may be forced to change their gameplan, which would allow for the Pokes to attack the zone coverages that the offense is designed to defeat.

Oklahoma also uses the psycho formation that Glenn Spencer has become fond of this season. 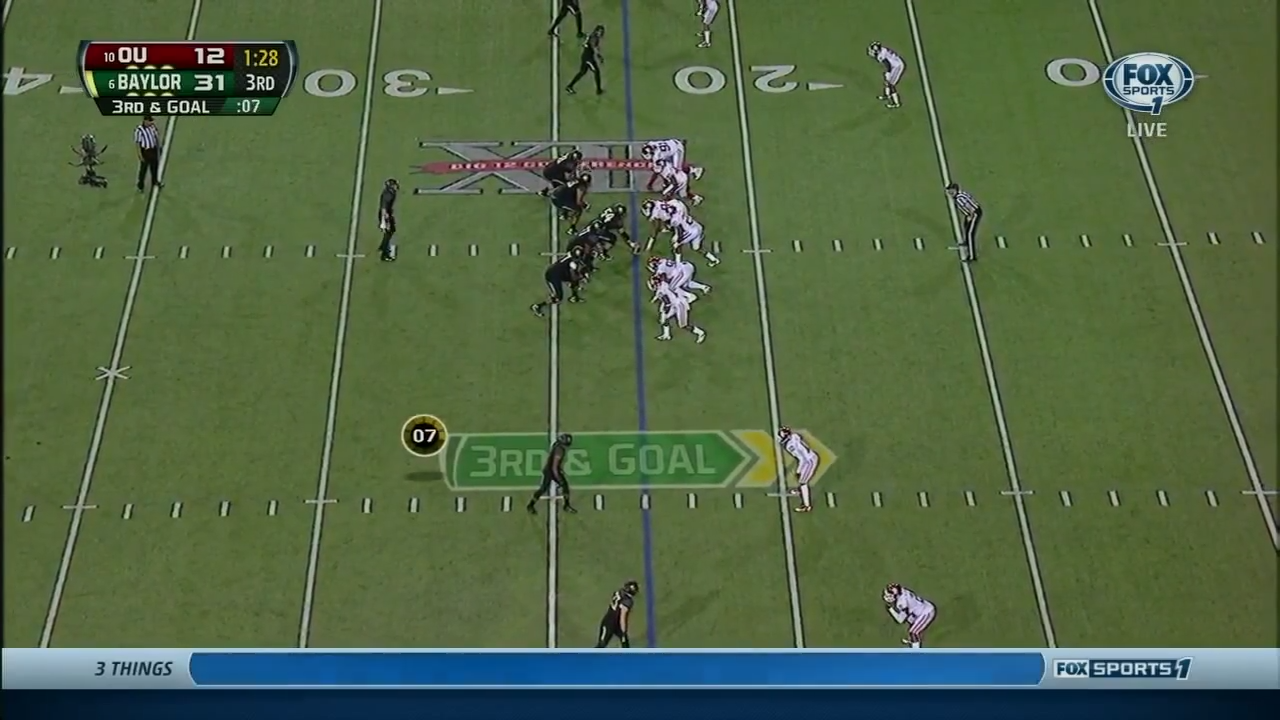 This is yet another example of Stoops putting faith in his secondary to cover, which can be dangerous against an offense with explosive playmakers like Baylor's. For the most part, they held up against the Bears in man coverage, but had a few inexplicable breakdowns in zone coverage. I'd imagine Stoops will continue to challenge opposing wide receivers to win routes and force opposing pass protection to hold up long enough for those receiver to get open, so Oklahoma State is going to need a strong group effort from the offensive line, a precise game from Chelf and for their receivers to make plays like they did against Baylor.

When it comes to blocking, making sure that Sooner linebacker Eric Striker is accounted for at all times is a key. Though he is built more like a defensive back, Oklahoma is going to line him up on the edge on virtually every snap and let him use his speed to disrupt things in the backfield. A few times Texas Tech completely whiffed on their line calls and left him unblocked, in which case Davis Webb would have been better off just falling to the ground at the snap. Striker has incredible quickness around that edge and can deliver a powerful hit because of the speed he's moving at. Luckily for the Pokes, their new found reliance on two-back formations allows for an extra blocker in the backfield on passing plays, and I'm sure Kye Staley will have some responsibility in picking up Striker if he gets around the edge.

What's interesting about Oklahoma is that they don't seem to adjust their personnel or the alignment of their front seven based on the opponent's formation. As I mentioned above, they do play some cover one, but that normally means the safety is split wide covering a receiver and not loading the box. When facing pass happy teams that still run the ball pretty well like Baylor and Texas Tech, this is the look that OU gave almost all of the time. 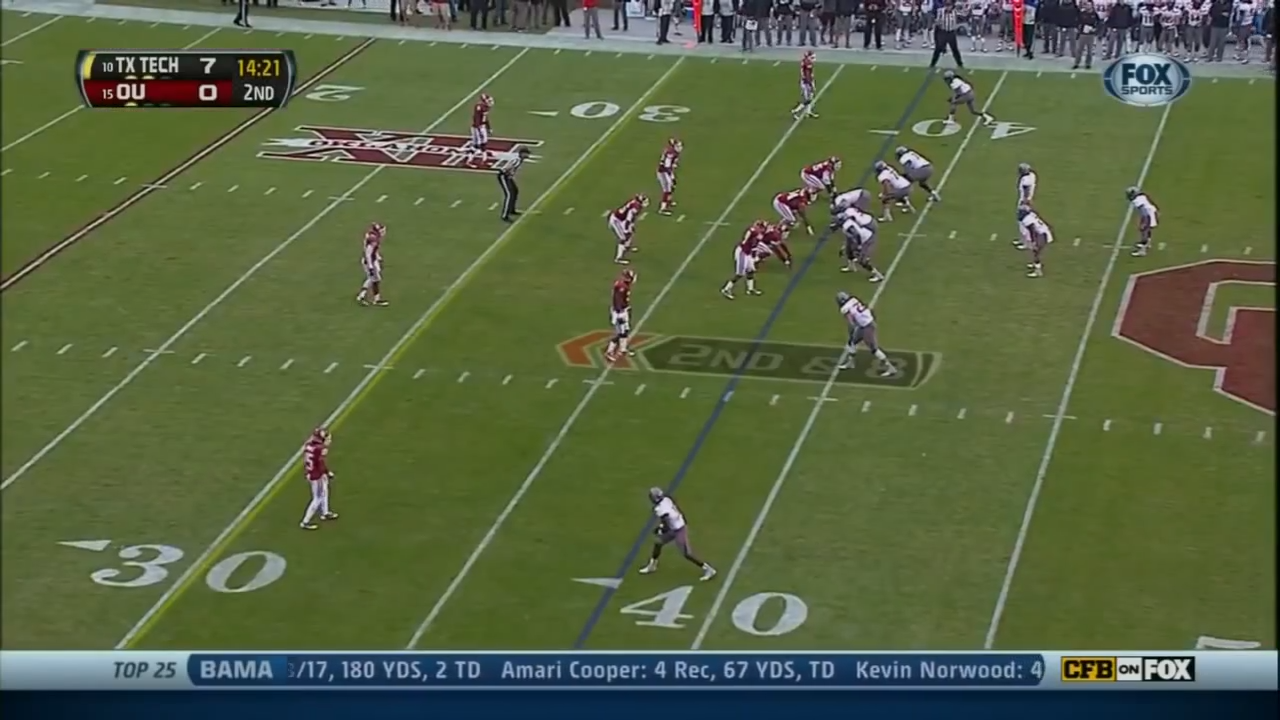 As you can see, Texas Tech is using a formation that we've seen the Cowboys use a lot of late, and Stoops has chosen to keep his safeties about 10 yards off the ball in this 3-3-5 alignment, which is Oklahoma's base formation.

Now, things were drastically different against Kansas State two weeks ago. Since the Wildcats are a run-first team, Stoops loaded the box and forced Jake Waters to beat him with his arm (and, surprisingly, he did). 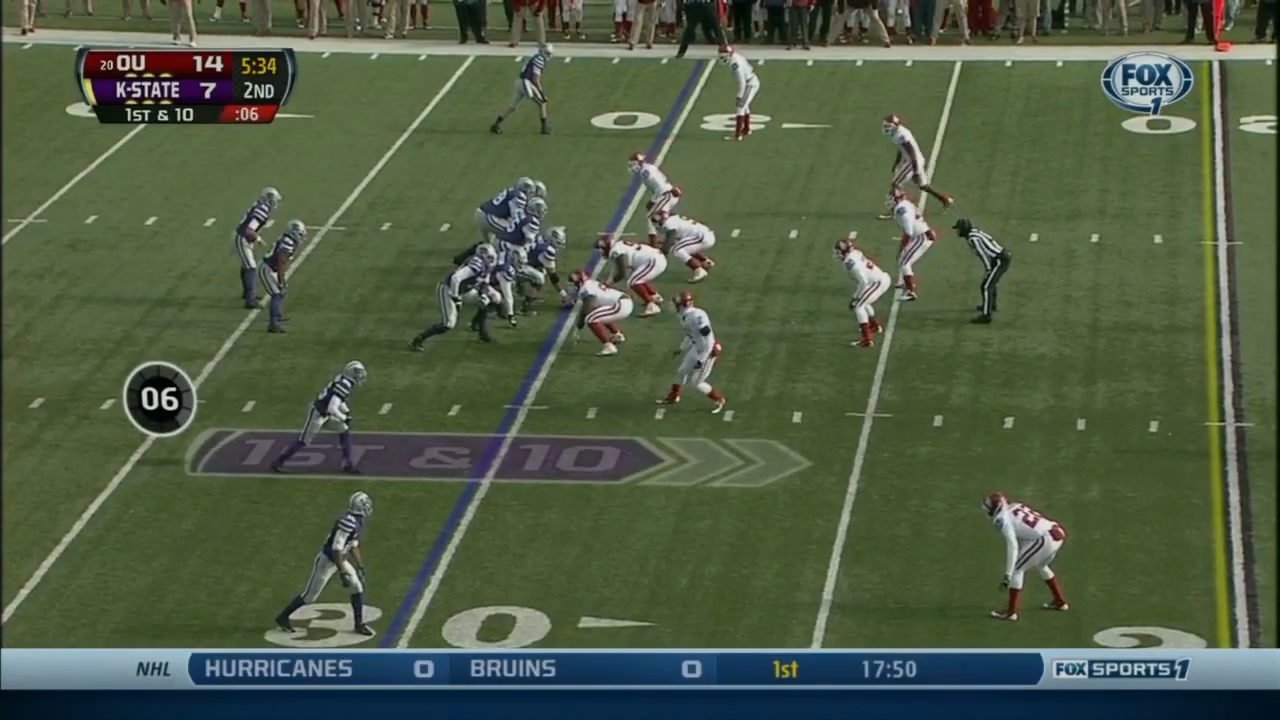 It's obvious that Oklahoma State plays more like Baylor or Texas Tech, which would lead me to believe that they'll encounter the same defensive front that those two teams saw against Oklahoma earlier in the season. But if the weather cripples Chelf's ability to throw the ball to the point where it's not worth risking it on early downs, I fear we may see some loaded boxes, particularly when OSU uses heavy personnel. Oklahoma held Kansas State to 1.1 yards per carry by loading the box, and though Waters lit up their secondary for 348 yards and three TDs, the conditions may act as an extra defender or two this weekend.

Should Oklahoma State be able to throw the ball effectively on about 20 attempts or so, which I believe is optimal heading into this game, then their running game should have enough space to operate as well. These two aspects of the game work hand-in-hand, and the Cowboys need to threaten the defense both through the air and on the ground for their companion to be effective.

As well as Desmond Roland played during the first few games of the turnaround, I think the Pokes are going to need Rennie Childs in this game. His burst and big play ability are necessary traits when attacking Oklahoma both up the gut and on the edges. Baylor struggled to run the ball against Oklahoma for a large portion of their game, Tech never got going and Kansas State's gameplan was all but eliminated because of the way the Sooners played up front.

To discontinue that trend, OSU will need a game-changing presence in the backfield, and Childs has proven to be the player most capable of that. Heck, even Jeremy Smith lit up the Sooners in 2011 with his giddyup. Point being, at some point in this game Oklahoma State will need to break the barrier in the running game, and I'm not sure Roland is the best bet to do so.

In the passing game, I think all of Oklahoma State's key playmakers - the Moore brothers, Stewart, Seales ... and Brandon Sheperd? - can make a difference in this game. If Oklahoma plays off coverage on the outside, Chelf can try to find a rhythm by targeting Tracy or Charlie on the outside, and if they play cover one and leave the middle of the field open, Stewart and Seales can making a living on slants, hitches and skinny posts (and even some go routes if Chelf's arm isn't frostbitten by the end of the first quarter). .

Chelf will need to limit his mistakes and play near flawless football in a game that may not have has many possessions as we've become used to between these two teams, which means there is less margin for error. I would prefer Chelf not be too involved as a runner since any hits he take will certainly take a little bit more out of him given the weather. I believe that Chelf will be able to win this game with his head rather than his arm or legs, and that's exactly what the Cowboys will need on a day when the conditions may limit everyone's physical abilities.

Chelf has played tremendously over the past few games, and if he's able to cap off of this turnaround with a demolition of a top five team in Baylor and a Bedlam blowout for the Big 12 title, he'll cement his legacy as one of the best Cowboy QBs of all-time.

And who in the world thought you'd be reading that sentence two months ago?

I had never had snow fall upon me until yesterday. There was one time in 2004 when in snowed in my hometown of Corpus Christi. In a manor too sensational and perfect for a Hollywood script, the snow began falling just as the clock struck midnight on Christmas night. I wasn't outside when the snow fell, though, and merely went outside to pelt my cousin with snowballs for a couple of hours. It also snowed when I was in Pennsylvania for my uncle's funeral a few years back, but once again, I just woke up to find it on the ground.

Having your face pelted with snow as it swirled all about wasn't as bad as I thought it would be, and I actually found it quite pleasurable compared to rain. What I thought was most interesting was that the freezing wind that had me shivering as I walked to class didn't bother me at all once it was accompanied by snow. As the blankets or pure white snow began covering all parts of campus, I guess the beauty of the scene helped warm me up a little bit.

That's what I am hoping will happen for me, as well as the Cowboy football team, on Saturday. With temperatures that could range from single digits to a high of around 20 and the potential for ice or sleet throughout the day, it's going to be miserable in Stillwater. But with a second Big 12 championship in three years on the line against the Sooners? Nobody should have a problem getting warmed up at the sight of that.