THE MOST INTERESTING OKLAHOMA STATE FAN IN THE WORLD

I don't often hate, but when I do, I prefer to hate the Sooners.

Share All sharing options for: THE MOST INTERESTING OKLAHOMA STATE FAN IN THE WORLD

He doesn’t have to shower after swimming in Theta Pond;

Marcus Smart learned how to do his "KU" back flip from watching his instructional video;

Pistol Pete was supposed to be his likeness, but they couldn't make anything that handsome;

He invented the color orange;

Berry Tramel doesn’t have a story about him;

He dunked on Blake Griffin;

When he asks Gundy about starters and injuries, he gets a straight answer;

He is always voted #1 in any poll, even by Nick Saban…and Gary Pinkel…

Johnny Manziel pays him for his autograph;

Squinky wouldn’t dare flick a tentacle in his presence;

He once tackled Barry Sanders...in the open field;

When he stands up, the OU band stops playing. 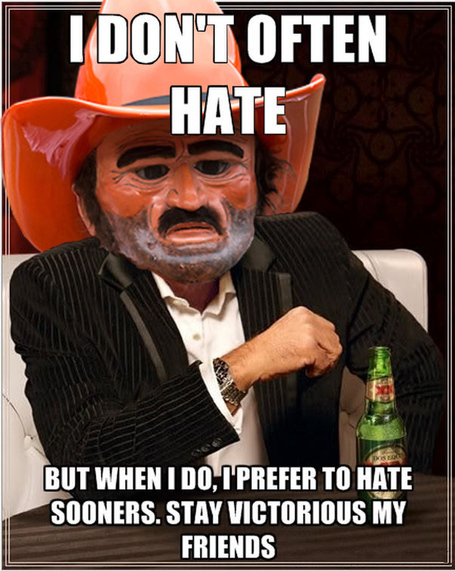