Nope, this wasn't mop up time.

Many will remember the end of Saturday's OSU - KU tilt in The Phog.

Twenty years from now, hell, probably even next week, we will recall the lineup that closed it out and halted the Jayhawks home win streak, as well as the Cowboys' losing streak at Allen Fieldhouse. 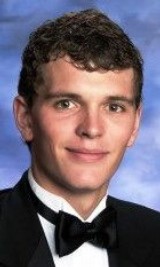 Christien Sager. A fella that plays so much that to find an "action" photo on the court is, to say the least, challenging.

Because this wasn't mop up time. This wasn't "let the main rotation guys get a blow because we have this in hand" kind of action.

Foul trouble forced Sager into playing time AHEAD of Brian Williams, who obviously is still recovering from wrist surgery despite action against Iowa State.

And I'll say this about Sager...

Le'Bryan Nash should be taking notes about how to play defense from ANY game film featuring the seldom used guard. Constant awareness and recognition. Head on a swivel. Barking to teammates.

And when he touched the ball on the offensive end a couple of times down the stretch in The Phog, he didn't panic, didn't look lost.

Which allowed the "man" on the floor, and his HS sidekick, to send KU packing.

It seemed almost everyone contributed something in one of the biggest upsets in the history of the program.

Cobbins opens the game with a basket and a block, and muscled Withey around in the second half.

Markel Brown reminded us in the first half that he has worked hard on his jump shot. Then he reminded KU. If given more time, he might have reminded every single person in Allen Fieldhouse. If that wasn't enough, his block of McLemore late got me out of my seat.

Jurick, in limited action due to fouls, took care of Withey in the first half, despite the Jayhawk getting several beneficial whistles (or non-whistles).

Nash, who continues to be the opposite of Sager in the "mental" part of his defense, hit one of the biggest shots of the game as the shot clock ran out with just over 2 minutes left.

Kirby Gardner, playing a very valuable 6 minutes, recorded no points, but had no TO's and 3 rebounds.

Forte, who couldn't have shot worse from the field if his eyes were closed, hit four ruthless FT's in the final minute.

Then there was the player that Bill Self referred to as a man amongst boys. 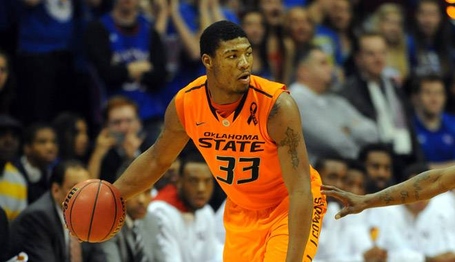 "You have a (6-4) guard that is a man playing against boys," Kansas coach Bill Self said of Smart. "Let's just put it how it is. That's what it is, and he kicked our butt. He is good, and we knew it. We didn't compete for loose balls and felt sorry for ourselves and acted like little babies." Bill Self

Marcus Smart took over. Like, he just decided that this was how it was going to be. Not hitting outside shots? Ok, I'll just go to the block and manhandle EVERYONE. Three critical put backs after misses absolutely stymied KU in the last 10 minutes. He didn't just physically dominate a player or two, he physically dominated the GAME.

His steal and pass to Forte to end the game was pure...well...Smart.

We can only hope his commitment to his education and desire for a shot at a championship on this level outweighs the $$ of the NBA for one more season.

Imagine going to The Phog, against the Jayhawks, and Smart and Forte go 1-13 from deep. Fouls put Nash, Jurick, and Cobbins on the bench.

I'm a big believer in fate. There are moments when it just hits you. That's what happened for me when I retweeted this on Saturday...

Recipe for an upset? MT @anthonyvslater KU has won 32 straight games at home. #OKstate is 1-19 in Big 12 road games the past three years.

There are a lot OSU events I will always remember.

As for the rest of the season, Ford and the Cowboys have set the bar high. This game was no fluke. OSU is that good. The talent is there.

What happens this Wednesday at home against Baylor will be HUGE. OU just beat Baylor in Waco. This is the kind of setting that could go one of two ways...

Which one will it be Travis Ford?
In the meantime, there should be ZERO excuse for anyone NOT attending the game Wednesday in GIA. Did you hear The Phog? Deafening, even on TV or radio. And this product is worth watching.
GO POKES!!!