Is OSU Hitting A Wall?

Oklahoma State's offense faltered against Kansas State, resulting in an early exit from the Big 12 tournament. Will the Cowboys be able to fix their issues in time for the Big Dance?

Share All sharing options for: Is OSU Hitting A Wall?

Last night's loss to Kansas State was a somewhat predictable one for the Oklahoma State Cowboys. They lost by six in Manhattan to the Wildcats and would have lost to them in Stillwater if it weren't for an interesting offensive foul call against Angel Rodriguez.

While it is disappointing that this team won't have a shot to be the Big 12 champs, what is really disconcerting about the Cowboys getting eliminated from the Big 12 tournament was the way that the offense performed against a tough Wildcat defense. What happened last night was the extension of a recurring theme of Oklahoma State's season: the spacing on offense is non-existent.

While starting the frontcourt trio of Le'Bryan Nash, Michael Cobbins and Philip Jurick makes for some tremendous defense, the effect it has on the team's offense may be just as detrimental as it is helpful on the other end, at least against better teams. Jurick provides no offensive value outside of offensive rebounding, Cobbins is a solid finisher but can't stretch the floor and Nash is Josh Smith-like in that he can shoot, but that's not what you want him to do a consistent basis. Even Marcus Smart is a below average outside shooter.

Markel Brown is the only starter that stretches the floor with above average three-point percentage (37.9%), and Phil Forte is the only other rotation player that hits above 30% of his long-range shots (34.4%).

This is the reason why it is not hard to believe that it took four minutes for Oklahoma State to score their first points of the game last night, and eight minutes for them to make their first shot in the half-court.

Kansas State extended Oklahoma State's offense away from the basket by hedging hard on all of their pick-and-roll action, which is how the Cowboys have created a large percentage of their points this season. 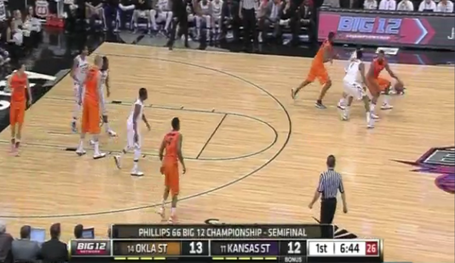 Look at the position that Smart is in here. He's being doubled to prevent any dribble penetration off the screen-and-roll action, and the weakside spacing is poor, with nobody in a position to make Kansas State pay for committing two defensive players to Smart.

More often than not, the Wildcats prevented Smart from turning the corner hard on pick-and-rolls, making it harder for him to attack the basket off the bounce. As a result, Smart shot just 6-of-17 from the field, only got to the line four times and finished with just three assists.

When the defense is preventing your best player from making plays, offense is harder to come by and possessions can get stagnant. As a result, impatient college kids can feel the need to press to put points on the board. 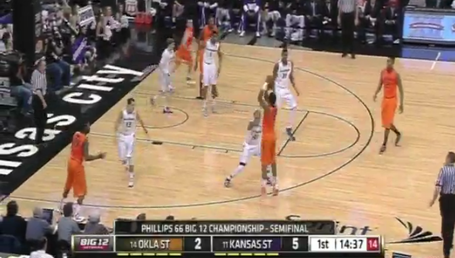 That is a 28% three-point shooter taking a contested three-point shot with 14 seconds left on the shot clock. The defense did shift a way from him a foot or two when Nash penetrated, but by the time he rose for the shot, the defense was back in sound position. Obviously, this is not the kind of shot you are looking for. 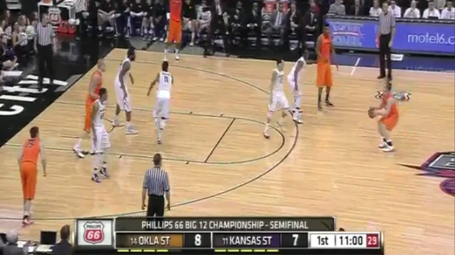 With two seconds left on the shot clock, a half-court shot from Phil Forte would be a great option, but this is with 29 seconds left on the shot clock. Forte must have been relieved just to get a good look at the rim, because he was incredibly eager to take a shot from six feet behind the three-point line. Can Forte make deep threes? Yes, but that is not a good look given the situation.

And on the rare occasions that Smart got into the paint and forced Kansas State to help on the drive, the floor wasn't spaced with options for Smart to find. Take a look here at how the floor is spread. 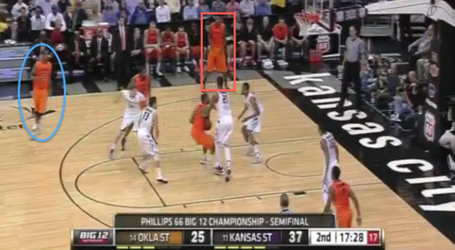 Kansas State has no qualms helping off of Nash in the corner, and the only good shooter on the floor for the Cowboys is Brown, and he's not in in a position to be a threat. If it were him in the weakside corner and Nash on the wing, Smart would be able to find him or the Wildcats wouldn't help off him, giving Smart a clearer lane to the rim. Kansas State has Smart boxed in with four defenders, and Oklahoma State's spacing is so bad that they can't make them pay. 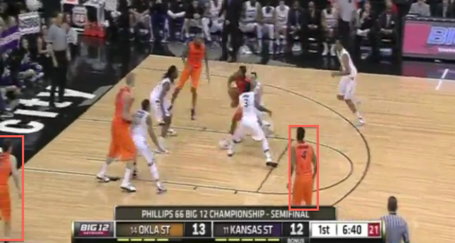 Here again, as Smart drives, Kansas State collapses their defense happily to stop him, unafraid of what Brian Williams or Christien Sager will do if he passes it to them.

Last night the Cowboys looked like a middling team with no direction on the offensive end of the floor. When teams are thwarting Smart in pick-and-rolls, Oklahoma State has to be ready and willing to shift their offensive identity by going to Nash in the mid-post and on the block. Instead, Nash got just two post-ups last night, even after destroying Baylor on the block in the second half of their second round matchup.

When you have a team that can't shoot, getting to the rim becomes even harder because defenses will pack the paint and force you to play on the perimeter. Nash is Oklahoma State's best option when the outside shots aren't falling, particularly when Smart is getting trapped up top on pick-and-rolls.

Even during one of the best seasons in program history with the two most talented players Travis Ford has ever recruited on the roster, Oklahoma State's offense has been far from great this year. While it has certainly been far better than it was over the past couple of seasons, there have been times this season when they have struggled mightily to score on a consistent basis.

Ranking 58th in the country in offensive efficiency (according to KenPom) isn't so bad, but the glaring issue with the offense is that lack of three-point shooting.

This is evident in the team's effective field goal percentage - eFG% is FG% with made three-pointers being worth 50% more. Oklahoma State has a 48.9% effective field goal percentage this season, which is just slightly above the D-1 average and ranks 148th in the nation. The Cowboys are a below average three-point shooting team, as they make just 31.6% of their attempts from deep, ranking them 269th in the country and well below the D-1 average.

According to Synergy Sports Technology, exactly 200 D-1 teams have attempted at least 450 catch-and-shoot jumpers this season; Oklahoma State ranks 166th in that group when it comes to points per possession (.936) and 114th in the group in field goal percentage (34.9%).

The Pokes have been able to survive their lack of three-point shooting because they get fouled a lot. Nearly a quarter (23.8%) of Oklahoma State's points this season have come at the free throw line, the 25th largest portion in the country. The Cowboys are also one of the extremely rare teams that gets a larger percentage of their points from the charity stripe than from the three point line (23.8% to 23.1%).

The ability of that trio to consistently attack the basket and to draw fouls gives the Pokes a much needed boost in offensive efficiency, and usually makes up for the team's lack of perimeter scoring. Once the Cowboys get to the line, they are one of the best teams in the country at converting their freebies with a 75% conversion rate (22nd in the country, 2nd in the Big 12).

Oklahoma State's record is indicative of their heavy reliance on free throws and their lack of three-point shooting. In four of their eight losses this season, the Cowboys attempted a below average amount of free throws (they average 23 free throw attempts per game). In the four other games they lost, they shot a combined 18-of-74 from three (24%).

With the NCAA Tournament just days away from tipping off, the Pokes are one of the more difficult teams to project. Their defensive pedigree places them amongst the nation's best, and in matchups against offensive teams, the grind-it-out squads tend to have an advantage.

But you have to wonder: If they matchup with another defensive minded squad that doesn't put them at the line a ton, will their offense be able to out execute a Wisconsin or a Virginia? And what if the Cowboys draw a sharpshooting team like Belmont (their projected opponent as of now) or La Salle or Davidson in the first round? Will they be able to keep up with the three-point barrage that often accompanies the Cinderella teams in March?

I have faith in the Pokes' defense to win them a game or two in the tournament, but even for a team with Smart and Nash, I am not so sure in their offensive execution against equally tough defensive teams.

Coach Ford could spend the next couple of days attempting to correct his team's spacing by way of X's and O's, but he can't make his players better shooters. So if the Pokes are going to make a lengthy run in the NCAA Tournament, they'll do so if Oklahoma State is one of the teams that gets sprinkled with the pixie dust necessary to cause a little Madness in March.