NCAA Tournament Preview: When Oregon has the ball

The Ducks can't shoot the ball, don't have a dominant post presence and rely heavily on their freshman point guard to create offense. In other words, they are just like Oklahoma State.

Share All sharing options for: NCAA Tournament Preview: When Oregon has the ball

The majority of teams across the college basketball landscape that love to play fast do so because they have teams blessed with extremely talented and/or athletic players (Memphis, VCU, North Carolina, etc.) or because they play extremely small (Iona, Iowa State).

The Oregon Ducks play fast, but it seems like they do so only to extend the brand that Chip Kelly built with the football team. In all seriousness, the Ducks like a fast pace because their half-court offense isn't all that efficient, and their jitterbug point guard, freshman Dominic Artis, can really push the ball up the floor.

Oregon plays with the 48th fastest tempo in the country according to KenPom and yet only score .98 points per possession in transition per Synergy Sports Technology (207th out of the 273 teams with 300 transition possessions this season). The combination of a fast pace and a below average transition offense combine to make Oregon a middling offensive team; they score 104.0 points per 100 possessions, 122nd in the country.

The Cowboys like to push the pace as well, as their 67.7 possessions per game average ranked 93rd in the country. The only teams that Oklahoma State lost to this season that ranked in the top 100 in pace were Iowa State (34th) and Kansas (91st), and they also beat both of those teams. The Pokes were 6-2 overall against teams with a top 100 tempo, with the wins coming against North Carolina State, Central Arkansas, Texas Tech, Iowa State and Kansas. The Ducks were 10-1 against top 100 tempo teams this season, with their best wins in that group being over UNLV and UCLA (twice).

We should expect a high octane game between these two teams, and I am inclined to favor Oklahoma State in a fast paced game as I think they are a bit more athletic on the perimeter and better offensively. One of the reasons that the Ducks don't score all that well in transition is because they are a high turnover team, and rushing up-and-down the floor can exacerbate that fact. The Ducks turn the ball over on 21.3% of their possessions, the seventh worst mark for any team in the tournament and one of the worst marks in the entire country.

Interestingly enough, the highest rated portion of the Cowboys' defense is their ability to get back in transition, at least according to Synergy Sports Technology. Of D-1 teams that have faced at least 300 transition possessions this season, the Cowboys rank 13th, giving up just .893 points per transition possession. When you narrow it down to power conference teams, the Pokes are fourth behind UCLA, Alabama and Indiana.

Moving on to the players that comprise the Ducks' up tempo attack: Oregon has a group of players that contribute in different ways, with no true number one option. The Ducks have a group of players that use between 16-24% of the team's possessions when they are on the floor, which makes them a very balanced team. For reference: Marcus Smart uses 28.1% of OSU's possessions when he is on the floor, 110th most in the nation, and the Cowboys only have three players with usage rates over 20% (Oregon has five).

E.J. Singler is the closest thing the Ducks have to a go-to guy, and he is definitely the player their ball handlers are looking to find on drive-and-kicks. E.J.'s career at Oregon has been very similar to the one his brother Kyle had at Duke. Neither Singler ever broke the elite 40% mark from three-point range (although they both had seasons at exactly 39.9%), but they both command the attention as if their numbers were a bit better. Singler is not just a standstill shooter, either. He is very good at attacking closeouts and driving to the basket if you run out at him too aggressively.

The Ducks love to get Singler on the move, particularly by having him flare across the top of the key while a big and a wing act like they are setting up a post-up on the strong side. The Pokes will have to make sure they have eyes on Singler at all times to minimize his open looks. The catch is you can't closeout at 100 MPH on him because he is very capable of putting the ball on the floor and getting into the paint (he's got a great shot fake, too).

I think Markel Brown is the ideal matchup for Singler. I've seen Brown get hung up on screens before this season, but he's the most athletic player on the team and he is very good at closing out on shooters when he is focused. It will take quite a bit out of him to chase around a shooter all game, but I think he can keep Singler in check and prevent him from getting off clean shots from deep.

Take a look at Brown chasing around Rodney McGruder earlier this season. You can see him get stuck in the mud on the screen, but look at all the ground that he covers despite getting caught up to make a decent contest. Brown will need to do a better job not conceding that space. If he does, his athleticism will really bottle up Singler.

Freshman point guard Dominic Artis is the engine that makes this team go. Unfortunately for the Ducks (and fortunately for the Cowboys), Artis has not yet fully recovered from a foot injury that cost him nine games (four of Oregon's eight losses came when he was out) and he may not be at 100% coming into this game (he only played 13 minutes against UCLA in the Pac-12 title game).

Artis is a very quick point guard with a knack for getting into the paint and making plays for his teammates. He's a better passer out of the pick-and-roll game than he is a scorer (he only shoots 36% out of the pick-and-roll this season), so any time you see him turn the corner on the pick-and-roll, expect him to be looking to draw the help defense and hit one of Oregon's athletic and smart big men cutting towards the rim or Singler and Damyean Dotson for a three.

Even with a healthy Artis, I really think that the Cowboys will be able to neutralize him because Marcus Smart is an incredible defensive player - not to mention about four inches taller and 40 pounds bigger - but it will take a team effort. Because Artis is not much of a shooter, Smart will be able to go under picks and get in good defensive position to do his best job of stopping Artis from forcing help.

That help defense is going to be the key to this game for the Pokes. The most important thing that the Cowboys will need to do is stay disciplined with their help defense principles. They have gotten killed this season because they tend to breakdown when faced with dribble penetration and Artis has done this all season long. Oregon's bigs - center Tony Woods and power forward Arsalan Kazemi - can post-up, but their best contributions on offense are lurking around the foul line and the baseline, or freely rolling to the rim once their defender leaves to help or doesn't play the pick-and-roll properly.

Take a look at Artis breaking down the defense and creating some easy looks for his teammates here.

I said yesterday that I advocate the Cowboys playing small in this game, so there will be a ton of pressure on Michael Cobbins, who has been great defending the pick-and-roll this season, and Le'Bryan Nash to cover for each other if help is necessary. Oklahoma State can't allow the Ducks to get into the paint consistently and they can't allow Artis to break them down to get Woods and Kazemi easy looks at the rim.

One way that the Pokes can slow Artis down and prevent him from making a huge impact on the game with his passing is by executing their pick-and-roll schemes correctly. Oklahoma State employs two primary pick-and-roll coverages: they like to hard hedge-and-recover with their bigs on side pick-and-rolls and they like to play a soft coverage on high screen-and-rolls where their big man will sag at the foul line to corral penetration and allow for the guard to fight back over the screen.

Here is Oklahoma State executing their hedge-and-recover scheme against a Pierre Jackson side pick-and-roll in the Big 12 tournament. Notice how Nash is in a position to force Jackson away from the basket. Jackson concedes the pick-and-roll possession and passes to the wing and Nash does a good job getting back to his man before the Bears could post him up. 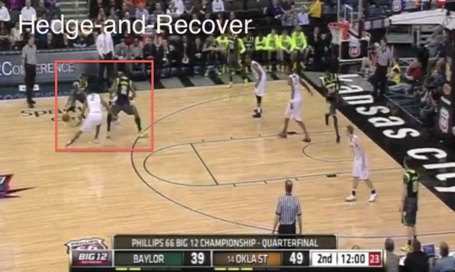 Here is the soft coverage for high pick-and-rolls in action. Usually the big will come a little bit higher than Cobbins is here, but the idea is to make sure that the point guard can't turn the corner and get to the rim. 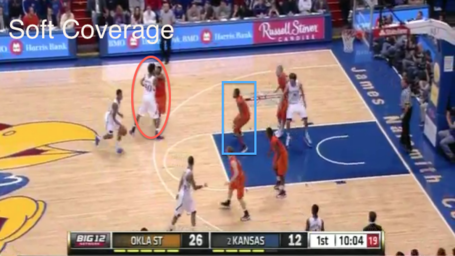 Nash, Cobbins and even Philip Jurick (though he as a tendency to take himself out of plays by jumping to the wrong direction on some high screen-and-rolls) have done a good job executing the scheme this season. The Cowboys generally do a good job of preventing opposing point guards from turning the corner on high pick-and-rolls and they also do a solid job rotating off of those hedges. The big challenge will be keeping Artis from blowing by the bigs at the foulline on high pick-and-rolls and trying to make him become a mid-range jumpshooter.

The Ducks are not a good offensive team, but that doesn't mean that the Cowboys can lack any effort or attention to detail on the defensive end and get away with it. The Ducks are going to miss some open shots and turn the ball over, but the Pokes have to work to prevent Oregon from feasting on interior buckets created by dribble penetration. The Cowboys are one of the best defensive teams in the country and if they stay focused for 40 minutes on this end of the floor, I believe they'll be able to win this game even if their offense can't create a ton of great shots against the Ducks' great defense.