After years of a "bend don't break" philosophy that created an epidemic of ulcers among OSU loyalists, word is a more aggressive style may be employed in 2013. We can only hope.

A solid group of returning players and some exciting newcomers greet new DC Glenn Spencer, and should provide ample talent to occasionally act like a defense instead of simulating a friendly game of tag.

Without further delay, let's dive into the positions and the coaches...

OSU starts off the spring with 5 upperclassmen on the defensive line, and returns the two players that anchored the middle in 2012.

Barnett and Castleman are the best OSU has had at this position in a while, and Barnett will definitely get a chance at the next level. Rogers is the only other player that brings the bulk necessary to clog the middle, but Collins also gets plenty of reps in passing specific scenarios. This group is solid and experienced, and should improve on last years solid play. Add to that 3 signees, one of which was a first team Juco all-american, as well as an ESPN 4 star freshman, both tipping the scales around 300 lbs, and this group could be really strong. When's that last time we could say that about OSU's defensive line?

The story is a bit the opposite for the ends. For the second consecutive year, the Cowboys have to replace experience.

Tyler Johnson is the only returning player with significant playing time, and while he did show promise last season, the rest of the crew is pretty unknown. Overall this group is young and a little undersized. Bean, Clark, Ogbah, and Irokansi came in with some expectations and will get the chance this spring to cement a spot, but will be challenged by Wren, who led the nation in sacks (1.6/gm) as a Juco sophomore last year. Mustafaa is a true freshman who enrolled early and came with some fanfare, but unless others don't pan out I would guess he redshirts to add bulk. Vili Leveni will join the team in the summer, so depth shouldn't be an issue.

The biggest change is the appearance of Joe Bob Clements (check out the 2nd and 3rd bullet points), who will take over the duties once held by Bill Young. He brings plenty of "winning" experience both as a player and coach, and you have to like the fact that OSU plucked a plum from the Bill Snyder coaching tree.

Of all the coaching changes for 2013, this one intrigues me the most.

Spencer is an excellent recruiter and pretty good coach, which is a big reason why this group has been fairly solid over the past few years.

While I am personally partial to Culver (from my hometown AND I graduated HS with his father), the patriarch of this group is Shaun Lewis. He has yet to relinquish his starting position, which he claimed over the last 6 games of his FRESHMAN season in 2010. One of two signature moments was this...

The other was the interception vs A&M in 2010 that set up Dan Bailey's game winning FG. He has a nose for the ball and has managed to stay pretty healthy for a guy who has been at it full time since he was a freshman. Lavey has become a pretty good leader for this group, and Mitchell will also contribute. Outside of that there is some recognized talent that hasn't had much opportunity to contribute. OSU didn't bring in any signees at LB for 2013, but that shouldn't be a huge concern. While generally good against the run, the LB's have struggled at times against the pass.

It will be interesting to see if Spencer can continue to develop this group while taking on the larger DC role.

After handling safeties in 2012, Malone requested a switch to cornerbacks for 2013, and everyone will have their eyes on his #1 pupil. 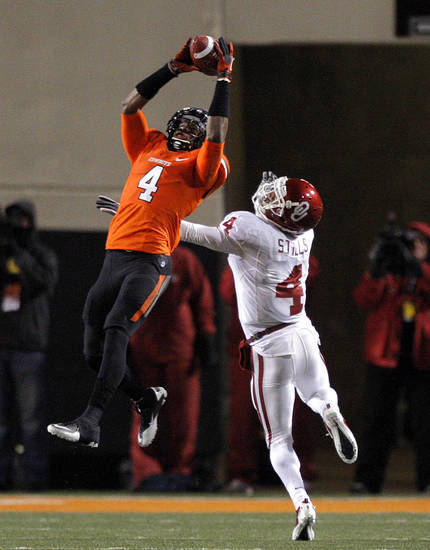 After a horrible 2012, Gilbert will be looking to return to highlight reel form for his Sr campaign. Peterson, Lampkin, and Jones saw plenty of action last season, and Peterson even supplanted Gilbert during one particularly bad stretch. Despite that, this is still a VERY young group with Gilbert the ONLY upperclassman. Three more CB's join the team this summer, including CJ Curry's brother, Darius. None of the newcomers are under 6-0, and with OSU barely 2 deep, there is a decent chance that at least one or two of them could make the depth chart and not redshirt.

IMO, the Cowboys are most vulnerable on defense at this position. One or two injuries and this group will be decimated. Malone has his work cut out for him.

Another pretty "interesting" position for the Cowboys, with a new coach and a "transfer" of sorts.

A group of upperclassmen bring experience, but not a lot of "star" power. Gary and Lowe are the anchors, with Craig and Stephens carrying over the most playing time of the rest from 2012. Imade was slow to follow up a solid 2011 season cut short by injury, playing in only 4 games last season. But the real news here is a "new" face. 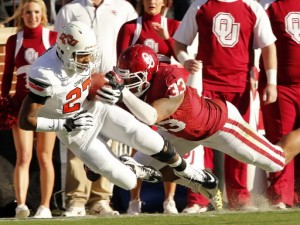 Lyndell Johnson, the skinny, fast LB that everyone wanted to see more of last season, is now a tall, stout safety. This was Johnson's natural position out of HS, so this should be a win-win for everyone, immediately adding badly needed depth with a proven player. Bring in 3 more this summer, all of whom top 6-1, and the future doesn't look so dim at this position. Keep in mind the Cowboys will graduate all 5 of the "experienced" safeties returning this year, leaving only Johnson for 2014 with any significant playing time.

Coach Duffie is a bit of an unknown, with full time stints at UTEP, Colorado State and Wake Forest preceding his journey to Stillwater. His college career was at Texas Tech under Spike Dykes.

Stonebraker handled 5 kickoffs against Savannah State. Reichenstein punted once in 2011.

That's it. Stonebraker has a fantastic name for it, but that's about all we've got. 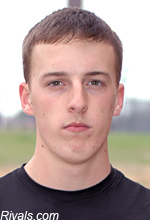 Summertime will be critical for this position group. I'm definitely nervous about this.

Gundy said if he really thought it was that bad in 2012, he would have cleaned house. Right now you only have one coach on that side of the ball (Spencer) who's been at OSU for more than 1 year coming into this season, and 2 of the 4 coaches are new (Duffie, Clements). Depth is an issue in the defensive backfield, and they have no kickers or punters with any real experience at this level.

Defensive recruiting was an emphasis, with over 50% of the class (12 of 23) registering for that part of the squad.

Overall, the defense should be improved. The talent level is definitely up. But lots of question marks are floating around for me, namely the attitude they play with. Gundy and Spencer have promised a more aggressive style in the right moments, and it seems like the beef exists to impose their will at times, but whether or not those things happen will likely be THE determining factor in how far this team eventually goes in 2013.

A look at the offense is coming later in the week.