"You tell 'em we're comin', and OFFENSE is comin' with us!

While the defense looks to rebound, this group just keeps chugging along, much to the dismay of DC's around the league and the country.

Share All sharing options for: "You tell 'em we're comin', and OFFENSE is comin' with us!

Most teams' seasons would come to a crashing halt with one or two major injuries to key offensive performers.

Imagine what would have happened had Blackmon or Weeden gone down for any length of time. Dez Bryant? We saw what happened when Zac Robinson played hurt at the end of 2009.

Well don't worry folks, cuz Gundy and Co. have assembled an offensive depth chart capable of fielding a SECOND unit that would be competitive in the Big 12.

Three QB's and a multitude of receivers who could all START someplace else in the league, all right here in little old Stilly.

These are heady times for this bunch.

If you don't know about Kye Staley (which means you haven't been paying ANY attention), then read this.

Again, I am partial to Derek Branson who, like Kyle Culver, comes from my hometown (Pawhuska) and who's father was a HS classmate of mine, seen here on the right just before Bedlam 2011.. 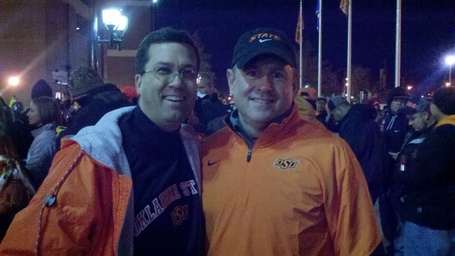 And not to be left out, here's the "Pawhuska" crew.. 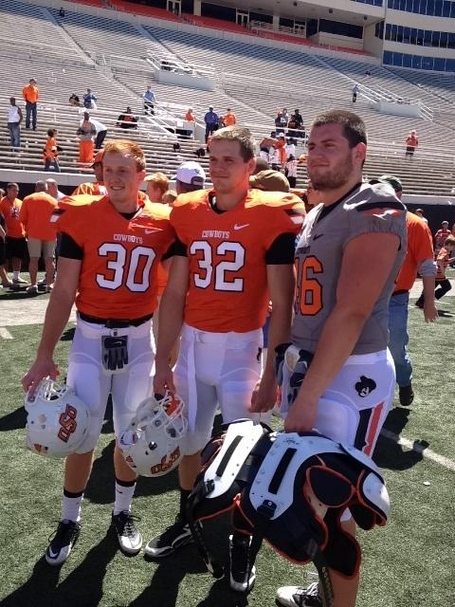 L to R...Bryant Reber, Kyle Culver, and Derek Branson. Reber comes from the KC area, but his dad has roots in Pawhuska, so he gets dragged into this...(thanks to Derek's father for the pic!)

I wonder sometimes about this position, which is pretty deep for a group that doesn't get a tremendous amount of pub other than Staley. I think it's very valuable, in that you need some dudes who can run over LB's and DB's in blocking schemes, and catch the occasional screen pass. Given the size of some of the younger guys, I wonder if OSU might use them once in awhile in formation as a blocking TE. Ramacher's presence on this list, for me, just indicates that they don't know quite yet what to do with him. It seems this position has become a repository of sorts for TE types that don't make the cut for inside receiver. Consequently, the Cowboys have the biggest fullbacks in the country.

As for the running backs, this may be the first time in a LONG time that "Running Back U" has a bit of a question mark at this position.

After a pretty good run with Toston, Hunter, and Randle, OSU now turns it's attention to Jeremy Smith. "Smiff" has had ample experience as a "change of pace" back for the Cowboys, spelling Randle a fair amount over the past two seasons. The question now is whether or not he can become the "every down" guy that his three predecessors handled well, running physical and elusive, functioning as very good receivers out of the backfield, while generally staying healthy.

Those last two are the issue for Smith. He has struggled at times with the types of injuries that hinder running backs. He is not viewed as a reliable receiver out of the backfield. Into those voids steps Roland, who has shown some promise in limited action behind Randle and Smith. He is more in the mold of Randle in that he is a more accomplished receiver, and brings a bit more size to Randle's slim frame. It will be interesting to see what happens here. I'm guessing that, unless Smith shows drastic improvement in his pass catching abilities, OSU will use Smith and Roland in much the same way as they used Randle and Smith in the beginning of 2011, more of a 50-50, 60-40 split, with Smith maintaining the role of the physical back and Roland stepping into the role of the more consistent every down guy. Either way, I think this will be pretty much business as usual for OSU.

That's all well and good, but throw in one unfortunate injury, and this group is on the ropes.

While Muncrief is trying to grow his skill set, and the VERY little bit we saw of walkon Cory Bennett looked promising, summer will bring the arrival of Rennie Childs (5-10, 180) and Corion Webster (5-11, 185), both out of Texas. One or both will be expected to immediately contribute.

Coach Singleton has done an excellent job of keeping this group physical, while still adapting to the spread, pass heavy attack.

And I'm still waiting to find out how tall Jeremy Smith REALLY is...

While we always know the names in this group, it is much more about the coach.

Almost every season the headline reads "OSU must replace 3 starters on the offensive line."

And every season that statement vanishes into the mist and aura surrounding one of the top 5 college offensive line coaches in the country.

How the Cowboys have managed to keep him, and we never really hear much about him leaving, is beyond me. Maybe Boone has set up a secret trust fund or Cayman Islands account with his name on it. Either way, Wickline continues to churn out lineman year after year. Can you remember any season in the last 10 years where we could say that the offensive line was a weak point of the team?

Although they lost three experienced lineman, OSU brings back plenty of experience with Graham, Webb, and Koenig leading the way. With 4 OL signees coming in the summer (the 5th was Garrett, a juco transfer who enrolled early), this group will be more than fine, no worries.

I could really devote an entire post to just this position. I'll start with the inside receivers...

While Josh Stewart headlines this group, Blake Jackson is the beast. If his hands and route running improve...imagine Blackmon 2 inches taller and 30 pounds heavier. At times uncoverable, 2012 for Jackson will be remembered for the drops, most notably the 2 against Baylor. Any improvement will make this tandem an absolute nightmare for opposing DC's.

Throw into that several other players with the ability to contribute (Webb/Goodlett/Carr/Glidden), and this is the beginning of the deepest and by far the best overall receiving corp in the Big 12, maybe even in the country.

The other half of this monstrous group is the wide receivers.

While the Moore twins are the alpha males of the outside guys, Hays and Sheperd will be solid contributors, and Curry and Seales will definitely get time. Add to that TWO 4 star signees due in this summer (Ateman/Samples) who could both easily compete for time, and this is the most unbelievable gathering of talent at one position on one team I've ever seen.

Both groups offer size AND speed, so if health (or other issues) don't get in the way and the QB's can deliver the ball, expect dominant performances week in and week out. There's just too many good players.

Kasey Dunn hit the lottery. He may need an assistant all his own.

Dunn understands what Yurcich walked into...more talent than he knows what to do with.

And the one with the best stats in 2012 isn't even the starter right now.

According to all reports, Chelf is handling all the snaps with the 1st team, and there's really no competition being fostered. That may not be totally awful, as the 2nd team offense is apparently giving the 1st team defense all it can handle, so it's not like the backups aren't getting quality reps.

Officially joining the fray this season is transfer Daxx Garman, who has about as much chance of seeing the field as I do of winning The Masters, or dating Halle Berry. Take your pick. By all accounts he has a strong arm, but seriously, he's got absolutely no shot. We saw what happened last year, so imagine the circumstances that would lead to him taking meaningful snaps, even mop up duty snaps.

I continue to be baffled by the lack of competition. While Chelf did ok guiding the Cowboys home last season, his game stats don't come close to measuring up to Walsh's numbers. Take away two games against horrible defenses, and his completion numbers are atrocious for a QB running a spread passing offense. Many said that his arm was better than Walsh's and he is more mobile than Lunt. Regardless of the stats, I would say he's not as mobile as Walsh and his arm isn't as good as Lunt's.

The only thing I can think of is that Gundy is hedging for the future, looking to keep Walsh and Lunt healthy with fewer battle scars for 2014 and beyond. At this stage, unless something really drastic happens, I can't see any semi-normal scenario where Lunt doesn't redshirt.

In the end, it doesn't matter a whole lot. This side of the ball is LOADED, and has the chance to be one of the best offenses the league has seen in a long time, maybe better than the Cowboys in 2011. Weapons are everywhere, and as I've said on multiple occasions, OSU could field a second team offense that would be competitive in the Big 12. It's mostly because of this unit that the Cowboys should be favored to win the conference title.

The question as always will be "other" issues...injuries, off the field crap, transfers, eligibility, etc.

But if OSU generally keeps its nose clean and is lucky with injuries, this team could be a juggernaut, even if the defense isn't vastly improved.

That's why, with a favorable schedule and so many teams retooling after major graduation losses, the season is ripe for a major Cowboy landslide.