POLL: Are the fans ready for Oklahoma State to be a preseason #1?

Part of being a marquee program is living up to the hype.

Share All sharing options for: POLL: Are the fans ready for Oklahoma State to be a preseason #1?

We all know preseason rankings are complete bullshit. They mean pretty much nothing in the end, with one rather huge exception...

It takes a lot more work and cooperation to climb the "ladder" when you start at or near the bottom.

Alabama can lose to Virginia Tech or A&M and still compete for the NC because they are starting at the top. The Cowboys cannot lose to Mississippi St and still reasonably compete in that same regard because that loss would likely drop them out of the top 20, if not the rankings altogether.

But that's for the national rankings...what about preseason conference predictions?

These are different from the national in that being picked to win and actually winning are in absolutely no way connected. We all know wins and losses, not rankings, determine the eventual Big 12 champion.

However, being picked to win is generally directly correlated to the preseason national rankings. If you are picked to win your major conference, you are very likely to be at least in the top 10-15 teams in the country. String together some good seasons with strong finishes in bowl games, and a program can gain the annual confidence of the voters and media. Take Oregon and Oklahoma State last season. Both teams lost their two best offensive players from 2011 squads that both finished in the top 5 after the bowl games.

Oregon has established a reputation in the last 10 years. The program is being ranked, not the players. That is not the case for OSU.

Do the Cowboys need to maintain a higher level of annual success? Absolutely. There is no substitute for winning games.

But in a year where OSU will arguably bring back the most talent across the board of any team in the conference, they have already been picked behind a "marquee" program that has recorded 3 mediocre seasons in a row, and returns the same mediocre QB.

Oh well. This just demonstrates that OSU has a VERY long way to go before reaching any kind of national prominence in football.

What prompted this little opinion piece was an exchange with a reader over at PFB, which you can see below... 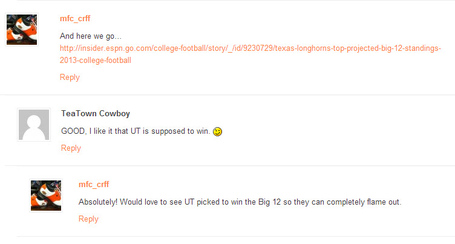 Then I thought about that for a moment.

If that's really the case, then neither of us is ready for OSU to be #1. As fans, the fear of our team NOT living up to the hype overrides the desire to have our team recognized as one of the best. We don't like the idea of our team traveling around with a big target on their back.

Which brings me to our poll question....