The New Big 12 Logo Will Kick Your Ass!

What's that? You have a problem with the new logo? Say it to the logo's face! Yeah, that's what we thought...poser.

Share All sharing options for: The New Big 12 Logo Will Kick Your Ass!

It's good to be back, kids. A long and, quite frankly, boring summer for the Big 12 is now starting to transition back into the best time of year.

And as always, the season has kicked off with The Big 12 Media Days. Now, there is always a surprise or two that comes from the media days. Usually it is a new rule explained or a different strength hair gel used by Coach Gundy but this year the Big 12 outdid itself by introducing us all to the new Tapout Big 12 logo. Let's just say that it screams THE BIG 12 IS THE UFC OF COLLEGE FOOTBALL CONFERENCES--YOU GOT A PROBLEM WITH THAT?!?!

Apparently the Big 12 is tired of hearing about how the conference plays second fiddle to the SEC and decided to show how XTREME!!! they are and that they ain't taking shit from nobody.

But the Big 12 isn't done. The logo will also be accompanied by a new slogan as well. Luckily for all of you, CRFF sent a representative to the media days and we were able to bring back a few ideas (as seen below) that Commissioner Bob Bowlsby is considering. 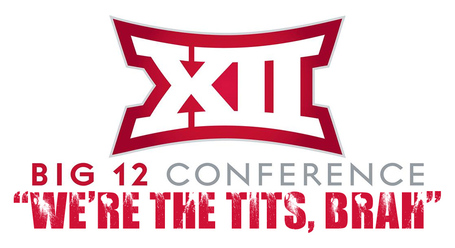 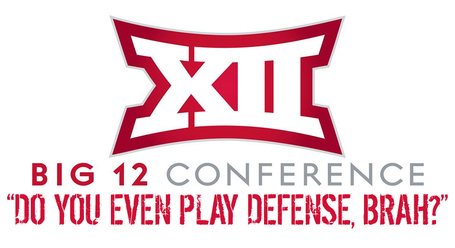 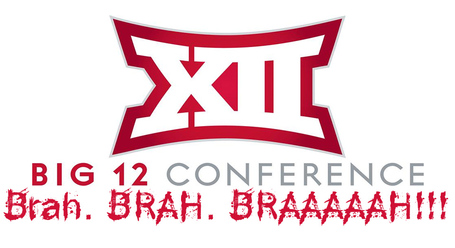 In addition to having the privilege of being the first media outlet allowed to share these potential slogans, CRFF was also allowed into a super duper, secret, elite press conference that few were allowed to attend (basically it was us, DeLoss Dodds, and seven UFC ring girls). Below is a transcript of the press conference.

Badass Bowlsby: I'm XTREMEly excited stoked to introduce you all to the new Big 12 logo. I'll now answer any questions about how gnar--gnarly? Did I say that right? How gnarly it is.

CRFF: Commissioner, we all know the old logo was a bit outdated but do you think this new logo might be a bit too--what's the word I'm looking for--terrible? Do you think there will be a backlash from people that think the Big 12 is trying too hard to be "hip?"

Badass Bowlsby: You may not like it...but your girlfriend does.

CRFF:...Ok...Moving on, does this move have anything to do with the conference's fading reputation of being one of the more premiere football conferences in the nation?

Commissioner Bowlsby then tried to drop the microphone in dramatic fashion as he exited but accidentally struck his own foot with it in the process. He was helped off the stage and taken to the hospital for stitches.